The Gophers have made the fewest errors in the Big Ten this season. 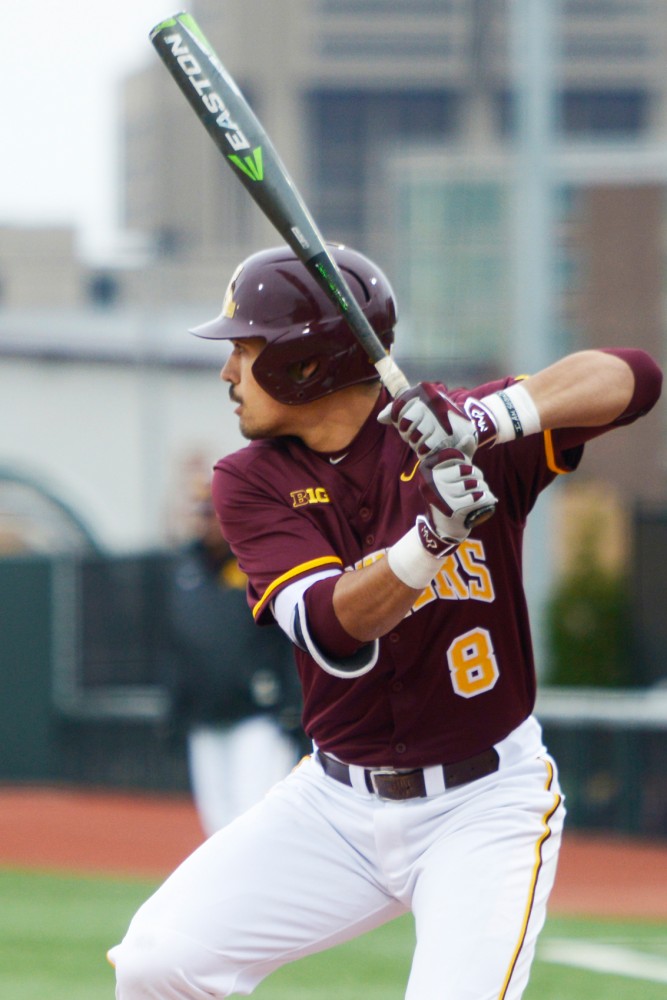 Sophomore Micah Coffey prepares to bat during the Gophers' game against South Dakota State at Siebert Field on April 13.

Kaitlin Merkel
Head coach John Anderson and assistant head coach Rob Fornasiere have kept running records of each team’s defensive statistics during their 31 years at the helm.
Anderson said it’s clear that games with few errors increase winning percentages, so defense is always at the forefront of practices.
“It’s our message every year,” Anderson said. “When you let extra people come to the plate because you don’t get an out … it generally leads to problems. Big innings are the death in this game.”
The Gophers (19-10, 4-1 Big Ten) have played consistently clean defense so far this season, which is one reason why the team is second in the Big Ten standings.
Minnesota has committed 23 errors through 29 games this season, which is the lowest mark in the Big Ten. As a team, Minnesota’s .978 fielding percentage ranks 18th in the nation.
The Gophers have also fielded cleanly despite putting out a young infield, which features three of four players who are starting every day for the first times in their careers.
Freshman shortstop Terrin Vavra, sophomore third baseman Micah Coffey and sophomore first baseman Toby Hanson regularly start alongside senior second baseman Connor Schaefbauer. In a combined 94 games this season, all four players have committed a total of five errors.
“It’s always a stress. Defense is the backbone of your team, and as good as you can be offensively, a lot of momentum is on defense,” Coffey said. “That was a huge stress for us, making sure we had chemistry in the infield but also that we got rep after rep.”
Hanson and Coffey weren’t everyday starters in the infield as freshmen, but they made 32 and 14 starts, respectively. Hanson, however, often served as the team’s designated hitter.
The solid defense has helped the Gophers outscore their opponents 192-134 this season, and Anderson said it’s also given Minnesota’s pitching staff confidence on the mound.
“We’re a team that believes in trying to pitch to contact. Not trying to get guys to strike everybody out,” Anderson said. “If you’re going to have that philosophy, you better have people that can play defense. We have a saying, ‘If you can’t play defense, you can’t play.’ ”
Anderson added he’s particularly impressed with his team’s mental toughness recently. The Gophers played in cold and snowy conditions during a doubleheader against Michigan on Friday but didn’t commit an error in either game and swept the two-game series.
“We talked about starting to prepare ourselves mentally for that challenge, and they surely embraced it,” Anderson said. “I think this team has shown that level of resiliency and determination and toughness really all year long, and it paid off for us.”
Delete Image
Align Left
Align Center
Align Right
Align Left
Align Center
Delete Heading