Taylor Stainbrook excelled early but has struggled in the Big Ten so far. 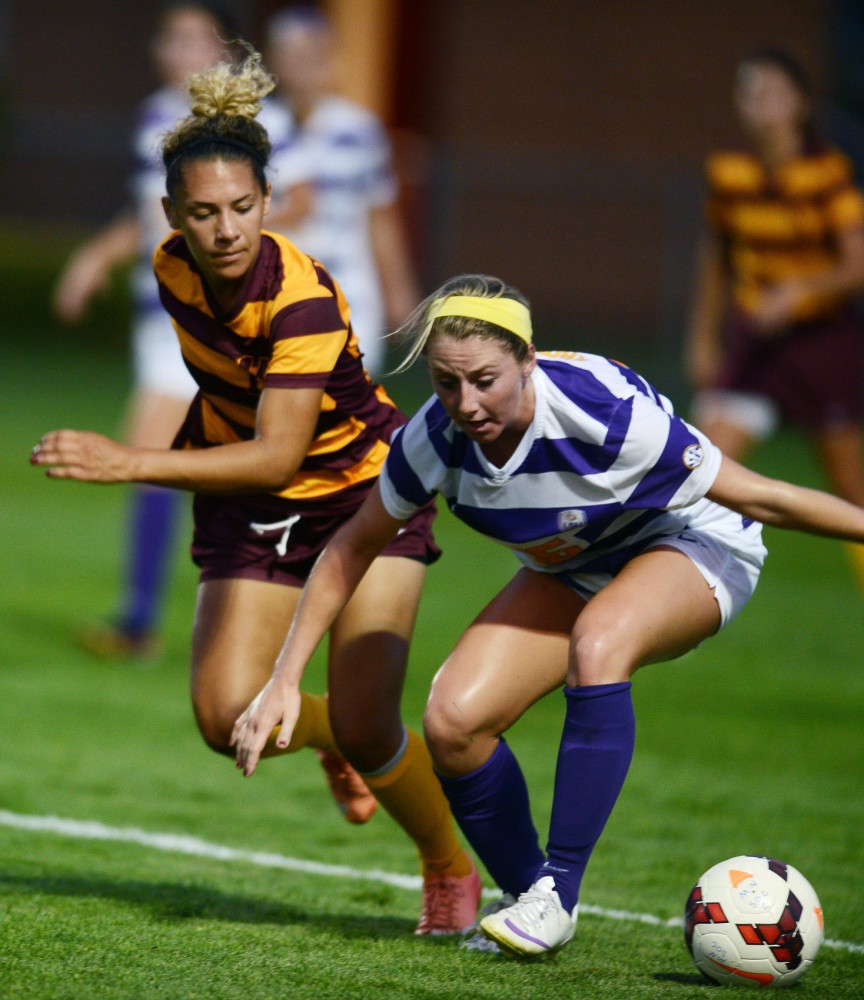 Minnesota defender Taylor Stainbrook tries to get the ball from Louisiana State on Friday, Sept. 6, 2013, at Elizabeth Lyle Robbie stadium.

In her first year, Gophers sophomore forward Taylor Stainbrook has demonstrated the ability to adapt.

And she’s needed it.

The transfer from North Dakota State has been forced to adjust to a new team and a foreign position, all while tackling Big Ten competition for the first time.

Stainbrook, a center back defender by experience and by trade, has made the jump to center forward this season. That position is located on the exact opposite side of the field.

Now instead of stopping the ball, she has to score it.

“It was a huge transition,” Stainbrook said. “Trying to get past people, I really notice how hard that is.”

Stainbrook played primarily on the defensive end of the pitch until she joined the Gophers, so she was surprised with the coaching staff’s confidence in her up top.

“I’ve not really had a chance to [play in the attacking zone],” she said. “But I was happy because I love being an offensive player.”

Stainbrook made the transition look easy early on. She scored two goals in the Gophers’ second game of the season against her former team, NDSU, for a 4-1 win.

“When you know the opponent, it gives you that much more urge to win,” she said. “I did not expect [to score twice].”

Stainbrook’s adjustment to forward has added depth to the Gophers’ attacking core.

“She’s been very productive, and she’s probably been one of our most consistent players in the attack,” Gophers head coach Stefanie Golan said Sept. 4. “That’s something that we didn’t expect, and those are nice surprises to have.”

But, as has been the case with all of the Gophers’ scorers this season, Stainbrook’s production has dropped significantly in Big Ten play.

“The competition is a very different level. It’s a higher level,” Stainbrook said of the Big Ten. “The girls are more athletic that we’re playing against.”

Stainbrook said she enjoys the increased competition. She said it’s one of the reasons she transferred to Minnesota, and she thinks she’s adjusting well.

“Coming in to a new team is always hard, and to be able to do that and start playing a different position is way harder,” Wodnick said. “I give her props because she’s done incredible with it.”