Turning the pages with Chelsea Handler 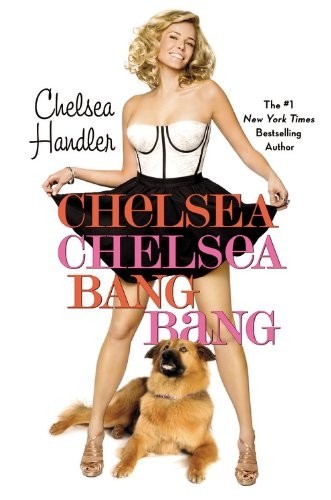 âÄúChelsea Chelsea Bang BangâÄù AUTHOR: Chelsea Handler PAGES: 247 PRICE: $25.99 Chelsea Handler is a funny lady. SheâÄôs funny when sheâÄôs not-so-secretly making mad fun of Audrina Patridge to her face on her E! talk show âÄúChelsea Lately ,âÄù and sheâÄôs funny as a talking head on E! counting down celebrity bikini bodies. SheâÄôs a bona-fide riot via her essay collections âÄúAre You There, Vodka? ItâÄôs Me, ChelseaâÄù and âÄúMy Horizontal Life .âÄù Did we think Chelsea was too busy schmoozing with Justin Bieber to pen another giggly tome? Of course not! SheâÄôs back on paper with âÄúChelsea Chelsea Bang Bang,âÄù detailing everything from her yearlong childhood obsession with âÄúthe feelingâÄù (read: orgasms) to her dadâÄôs stint as a MarthaâÄôs Vineyard slumlord. Chelsea is just as sharp a writer as she is a comedian and late night talk show host. If you found yourself cackling over her words in âÄúAre You There …âÄù and âÄúMy Horizonal Life,âÄù chances are youâÄôll enjoy âÄúChelsea Chelsea Bang Bang.âÄù The book starts off with a Chelsea flashback. She details how, as an 8-year-old from New Jersey, she became obsessed with giving herself intense, fully-clothed orgasms. Apparently she spent a year jacking herself off via swingsets before she got bored and didnâÄôt rediscover her climaxing power until her later years. The book might climax there. Chelsea spends the majority of âÄúChelsea ChelseaâÄù talking about the chaotic cast of characters that surround her: her eccentric, overweight father and his cavalcade of used cars; her (now ex-) boyfriend Ted, CEO of E! and Comcast ; her girlfriends and the giant driver she uses when she visits New York City. Throughout her tales, we get to hang out with Chelsea as her child self schemes for a Cabbage Patch Kid , while she plays vagina-centric pranks on the folks at E! and as she takes the aforementioned driver, Sylvan, on a tropical vacation and attempts to get him laid. Chelsea is at her best when sheâÄôs discussing two things: her childhood and her sex life. ThereâÄôs a little of each here, but there should be more. It gets a tad monotonous reading about all the different ways Chelsea can pester her honcho boyfriend Ted, who happens to be one of the more endearing figures in the book. You can hear him sigh in defeat as Chelsea demands an in-house dolphin or tries to purchase a mini-horse, just for fun. As you read through âÄúChelsea Chelsea Bang Bang,âÄù it feels as if sheâÄôs sitting right next to you, animatedly telling you about the time she laid in bed for two days watching romantic comedies and eating nothing but Cheeto s and Lean Pockets. A major strength of ChelseaâÄôs writing is that while she can make merciless fun of her sad-sack father, she cares about him and appreciates his contribution to her ridiculous life. Her eye is incredibly sharp. âÄúI am fascinated by anyone and everything, especially about a childhood story, about an inappropriate uncle or obesity,âÄù she said in her book. The stories are funny and compact, often chock full of biting wit and occasionally cringe-worthy confessions and anecdotes, but they donâÄôt make up as satisfying an essay collection as her first two tomes. âÄúChelsea Chelsea Bang BangâÄù feels hastily thrown together, maybe to capitalize on her current Seacres t-channel popularity. But please stick around, Chelsea. We wouldnâÄôt mind if you slid into LenoâÄôs spot and found the time to write a few more books like this. Excerpts âÄî ChelseaâÄôs take on hot issues: Child Chelsea, arguing with her parents about the desired Cabbage Patch Kid: âÄúIf this were a Latter-Day Saints doll, IâÄôm sure youâÄôd be there with bells on and a nipple ring.âÄù On animal trainers: âÄúPeople who chaperone animals for a living have never had a girl sit on their face.âÄù On her motherâÄôs reincarnation: âÄúSpreading brie over my bedspread and coming back to life as a dog is totally something my mother would do.âÄù