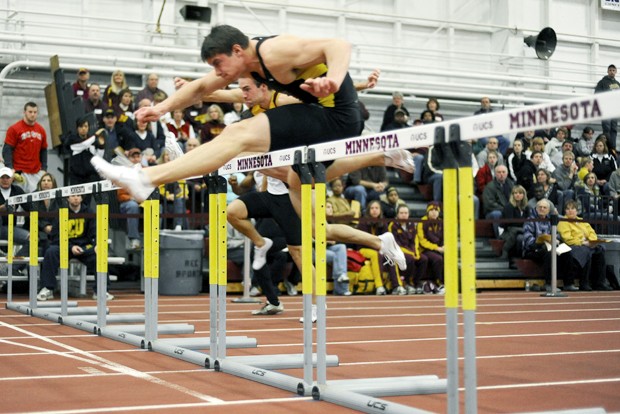 The Minnesota menâÄôs track and field team heads to the Big Ten Indoor Track and Field Championships this weekend. The meet is hosted by Penn State and takes place Feb. 28-March 1. The last time Minnesota won the title was in 1998; last year the Gophers finished fifth . Coach Steve Plasencia said it was MinnesotaâÄôs worst finish in 12 years but that the Big Ten is a difficult meet because the conference has strong teams. âÄúThe strength of our team is in a group of individuals,âÄù he said. Senior Ibrahim Kabia is the defending Big Ten champion in the 100m and one of the top performers in the conference in the 60m. Junior Matt Fisher competes in the high jump and has the best mark in the conference right now. Junior Chris Rombough and sophomore Hassan Mead sit at the top of the conference in the 3,000m and 5,000m runs. Junior Aaron Studt , the current Big Ten MenâÄôs Field Athlete of the Week, threw a career-best weight throw last weekend. His toss of 66-11.25 inches is an NCAA provisional qualifier and the third-best in school history. Plasencia said this weekend will show the Gophers how they rank in the Big Ten. âÄúThere are a number of guys that can compete on the conference level,âÄù Plasencia said. âÄúIt is important for us this weekend to see how those guys who can [compete in the conference] get points anywhere from sixth to eighth. Those points are going to be very important for us.âÄù Even though 69 of last yearâÄôs 77 points are returning this year , Plasencia said he doesnâÄôt put any specific point expectations on the team. âÄúI just expect us to go out and compete hard and be supportive of our teammates and give it everything we have,âÄù he said. âÄúI think our team is ready to do that. If we do that, we will come out of this in good shape.âÄù WomenâÄôs Track and Field The Minnesota womenâÄôs track and field team heads to Indiana for their Big Ten Indoor meet to compete for their third consecutive Big Ten Indoor track championship. Last year the team won by eight points and if they win this year, the track team will be the first Minnesota team to win three conference championships in a row since the baseball team did from 2002-2004. Heather Dornidan will continue her senior campaign running in the 600m, 800m and the mile. She is also likely to be included in the 4x400m and distance medley relays.