The Gophers football team and other friends of Gary Tinsley gathered outside Roy Wilkins Hall on Friday evening. 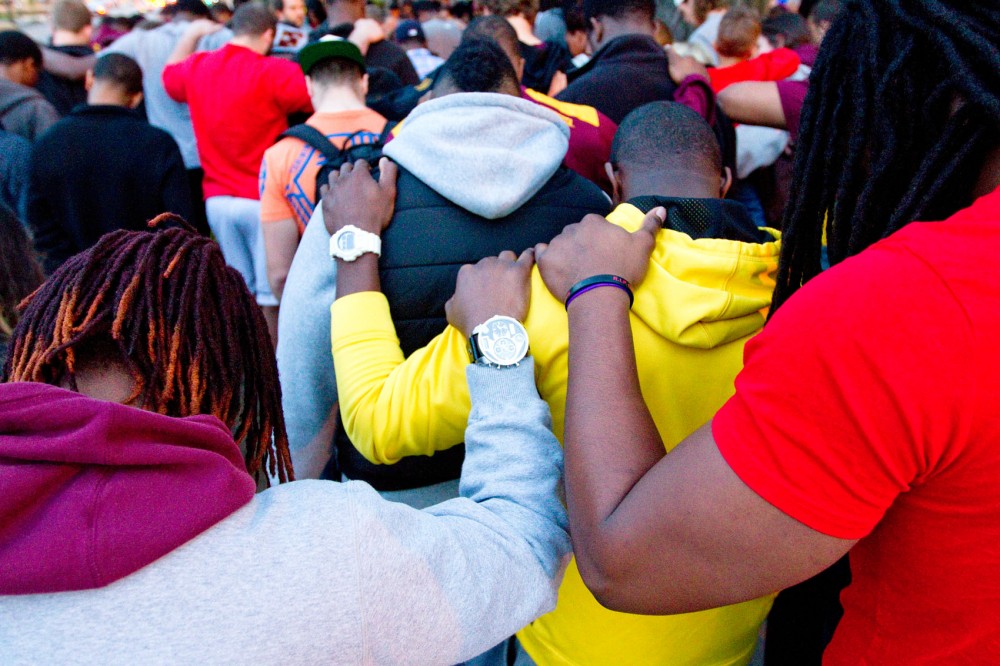 Speaking on behalf of the football team at a press conference Friday afternoon, Gophers quarterback MarQueis Gray called it “a sad day for Gopher Nation.”

“You enter a brotherhood and you’ll always be a brother of the U of M once you put on that … maroon and gold,” Gray said. “Last night we were texting each other, and now he’s gone.”

University police received a call at about 7:40 a.m. Friday from a roommate who found Tinsley, 22, unresponsive in his room. University police Chief Greg Hestness said there were no immediate signs of foul play, but the police are treating it as a suspicious death.

Hestness said Tinsley had no known prior medical conditions, and there was no evidence of drug and alcohol use. Once on the scene, responders tried performing CPR for about half an hour.

After the news of his death spread through campus Friday, students held a candlelight vigil in his memory.

Tinsley, a Jacksonville, Fla., native, was on his way to graduating in May with a business marketing and education degree. A spokesman for the College of Education and Human Development said Tinsley will be awarded his degree posthumously.

In a statement, University President Eric Kaler said, “It is always difficult to lose a member of the University family.” Kaler noted how close Tinsley was to graduating and his contributions to Gophers athletics.

“Our thoughts are with Gary’s family and everyone on campus who knew him,” Kaler said.

Kiara Jackson, a University student and friend of Tinsley, said through tears at the vigil that he “was just a good guy.”

“He was about to graduate,” Jackson said. “It just doesn’t make sense.”

Athletics director Joel Maturi flew in from the Frozen Four in Tampa, Fla., after hearing of Tinsley’s death.

“Anyone who knew Gary, it’s tough,” Maturi said at a press conference, tears in his eyes. “Obviously I don’t know all of the 750 athletes as well as I’d like. Gary is one that I knew.”

“Sometimes I got to know him because of some of the things I had to deal with,” Maturi said. “It was great to see his growth.”

Tinsley had two misdemeanors on his record from a 2010 incident involving drunk driving his moped and fleeing police.

At the vigil Friday evening, 2011 University graduate Mejoy Lawson said, “To hear the memory, that’s how it should be: celebrate his life, versus anything else that we might see in the papers about him.”

“Gary was affiliated with a lot of our supporters.” said Arsenio Ward, president of the University’s Black Student Union, which started the vigil in front of Roy Wilkins Hall.

The gathering began with a moment of silence. The crowd held lit candles and spanned across the lawn in front of the residence hall.

Speakers mentioned Tinsley’s sense of humor, family priorities and religious values. Friends and teammates called him “Scuse Scuse,” for the way he said “excuse me.”

Ashley Salchert said she saw Tinsley in class the day before he died. She first heard about his death on Twitter.

“It was pretty devastating for me this morning,” she said. “I’m happy that the U is going to give him his degree, because that’s all he talked about,” Salchert said.

The vigil ended in prayer as the sun set Friday night. Many went their separate ways, but the University’s football team stayed behind for a team huddle.

They chanted a single word: “family.”

“I think [his passing is] an unfortunate reminder that life is a gift, and it can be taken at any moment,” former teammate Brock Vereen said. “We have this opportunity to play college football, and we need to make the most of it, and that involves showing our teammates that we love and care about them, and that’s brought us closer together.”

“We were all hanging out with him last night; he was here yesterday, and he’s gone today,” Gray said, “so you just got to cherish your life.”