Minnesota beat Robert Morris 6-1 on Friday and 5-0 on Saturday. 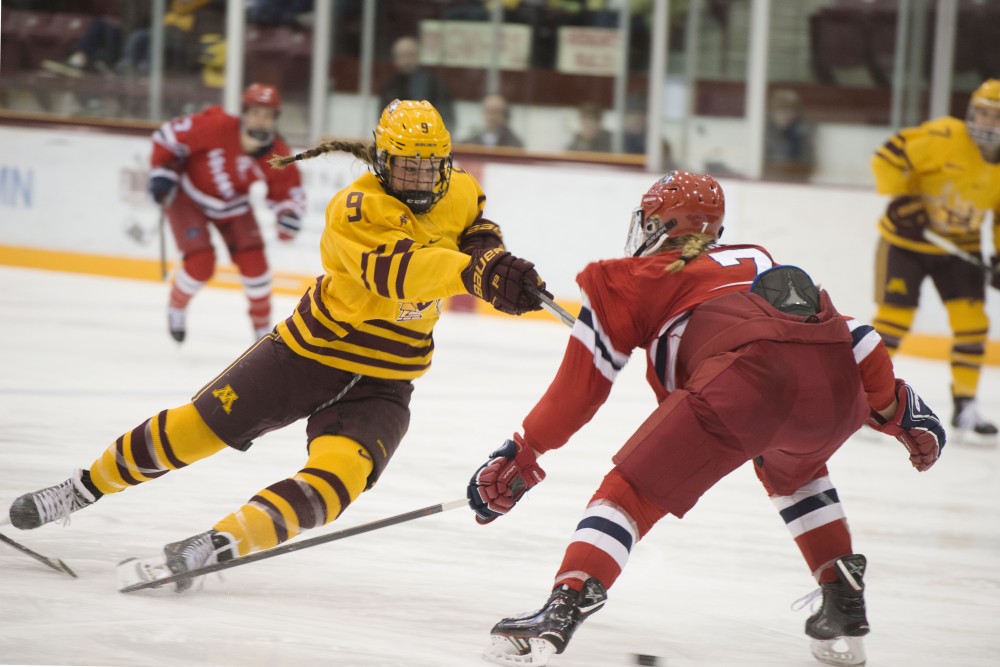 Freshman Taylor Heise goes for the goal on Friday, Dec. 7 at Ridder Arena. The Gophers won against the Robert Morris Colonials 6-1.

The Gophers went into the break just like they wanted to.

“We’re doing many of the little things that championship teams need to do, whether it’s getting the puck out or blocking shots or continuing to apply pressure,” Frost said.

In Saturday’s victory, center Taylor Heise scored twice — once in the first and once in the third. It was Heise’s second multi-goal game of the season. Minnesota also received goals from center Kelly Pannek, left winger Taylor Williamson and right winger Alex Woken.

Heise opened the scoring for the Gophers at 11:18 of the first period. While on a power play, Heise fired a snap shot past Colonials goaltender Lauren Bailey. It was Heise’s sixth goal of the season.

Goaltender Sydney Scobee made 30 saves, for her fourth victory of the season. Scobee ended the first half of the season the way she began it —  with a shutout. It was Scobee’s second shutout of the season.

“It feels good to get the shutout,” Scobee said. “[It’s] a great way to end the year and it will give us momentum for the second half.”

Wente, Schammel and Zumwinkle each scored a goal as Minnesota defeated Robert Morris 6-1 Friday. The Gophers scored four times in the first period.

“Originally, I was thinking about shooting it, and then I realized how much open space I had, so then I took it to the net,” Zumwinkle said. “It was a surreal feeling. The teddy bears are going to a good cause.”

Robert Morris responded less than two minutes later when a shot by center Jaycee Gebhard hit the goalpost inside the net and came straight out. The referee initially signaled no goal but after reviewing the play on video replay, the call on the ice was reversed and Robert Morris was awarded a goal.

“I was surprised when they didn’t call it a goal right when it went in the net,” he said. “I saw it go into the net. I put my head down and all of a sudden, we were still playing.”

Defender Emily Brown put the Gophers back in the lead with a goal at 13:34 of the first period. Brown skated through the slot and beat Bailey with a wrist shot. It was Brown’s fourth goal of the season and it gave Minnesota a 2-1 lead.

Goaltender Alex Gulstene made 20 saves, earning her 13th victory of the season. The Gophers have allowed two goals or fewer in 16 games this season.

“I will never complain about a win,” Pannek said. “We want to outscore teams. We also want to play great defense. That’s what’s been good, too. We’ve won games by outscoring teams by six or seven goals but also holding them to one or two.”

Minnesota will open the new year on Jan. 5 and 6 when the Gophers host the inaugural Minnesota Cup, a tournament featuring all four Minnesota collegiate teams—Minnesota, Minnesota-Duluth, Minnesota State-Mankato and St. Cloud State.

Frost said January will be a challenging month for Minnesota.

“Our schedule’s going to be tough right out of the shoot,” Frost said. “January’s going to be a tough month for us, but I believe that we’re starting to form an identity.”