Dorms compete to turn off lights, ramp up recycling

The greenest residence hall will win a tailgate party in April. 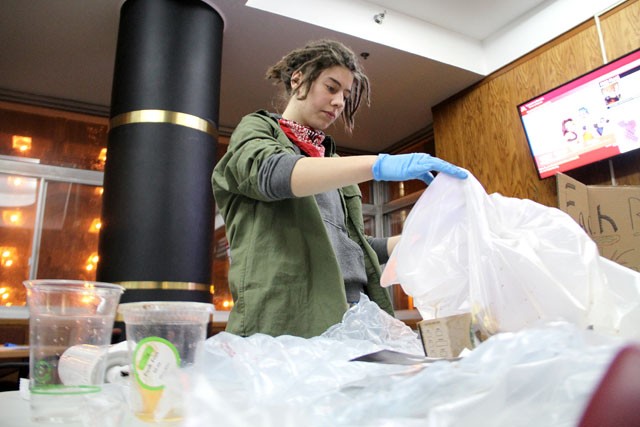 Sustainability sophomore Rosalyn Murphy sorts through Centennial Hall’s trash Monday during the Conservation Madness kick off at the dorm. Between February 7-20th, all residence halls will be competing against each other to increase recycling and reduce their electricity usage, with the winning dorm earning a national basketball tailgate party.

Every University of Minnesota residence hall produces 500 pounds of waste every day, but students are competing to keep that figure down.

Conservation Madness, beginning Feb. 7, is a competition between residence halls until Feb. 20 to reduce waste and electricity use while increasing the recycling volume by the largest percentage.

Rosalyn Murphy and Emma Wright, University student recycling coordinators in the University Recycling Program, display items like office paper, receipts and Starbucks coffee holders that were thrown into the trash but could have been recycled.

“If 500 students a day throw their paper into the trash instead of recycling, itâÄôs a big deal,” Murphy said.

Shane Stennes, sustainability coordinator with University Services, said students can make simple changes in their daily routines to conserve resources, like cutting back on “vampire power” âÄî the power drawn from outlets when objects are not in use âÄî by using power strips or simply turning off the lights.

“There are not many lifestyle adjustments that have to be made,” Stennes said. “ItâÄôs more about becoming more aware of how youâÄôre using electricity.”

Facilities Management and Housing and Residential Life kicked off Conservation Madness on Monday and Tuesday in most residence halls. Bailey and Middlebrook halls will host events Wednesday night, while Sanford and Roy Wilkins halls will hold off until Thursday.

Staff handed out free reduced-energy light bulbs and rifled through 10 percent of residence hall trash to show items that students threw out that could have been recycled.

A coalition of student groups will go “off the grid” Monday by hosting a campout outside Coffman Union.

The Energy Efficiency Student Alliance âÄî made up of the Active Energy Club, Minnesota Public Interest Research Group, Green Biz and EcoWatch âÄî teamed up with Energy Management to make students aware of the everyday choices they can make to save energy.

“You can do small things just in your dorm room to make a big difference to save waste and conserve energy,” said Chelsey Shoup, a University sophomore and event coordinator for the Active Energy Club.

The U conserves, too

The University as an institution is also striving to become more energy efficient, Stennes said.

In March 2010, the University reached its goal of reducing campus energy consumption by 5 percent, saving approximately $2.25 million through its “It All Adds Up” campaign, said Chris Kelleher, spokesman for Facilities Management.

Last summer, the University and Xcel Energy retrofitted residence halls with high-efficiency lighting. The University received a rebate in the amount of $142,772 from Xcel.

Although the No. 1 goal for Conservation Madness is awareness, Kelleher said the goal is to reduce energy consumption and increase recycling by 5 percent each in the residence halls during the campaign.