Review: ‘Us’ makes us question what we see in the mirror

Liked Jordan Peele’s “Get Out?" Get ready for his new creepy and complex thriller. 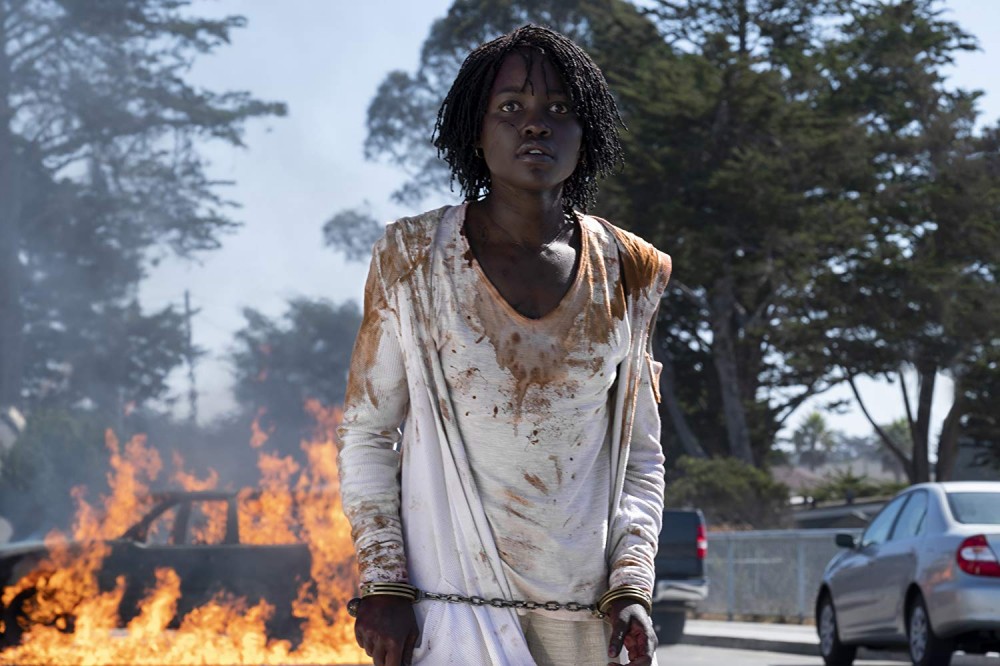 Lupita Nyong'o in Us.

However, Adelaide is haunted by a feeling of impending doom on the way.

In flashback, we see an unsettling moment where Adelaide is lost as a child in a carnival funhouse below the dock. Trapped in a mirror maze, she spots a girl who looks exactly like her — but it is not her reflection.

Flash forward. As the family gets settled for bed, they notice four people standing in their driveway. Eerily silent, the figures ignore Gabe’s tough-guy routine. (“If you wanna get crazy, we can get crazy!” he shouts, wielding an aluminum baseball bat.)

Then, without warning, the figures scatter and make their way toward the house.

It’s not until later that the Wilsons discover that each of the figures look exactly like them. Even worse, they think like them too.

Although the plot of “Us” is deceivingly simple on the surface, director Jordan Peele takes advantage of traditional horror tropes common in slasher movies, like jump scares and the “evil twin” motif.

Whereas the villains of his award-winning movie “Get Out” were more subtly veiled as good guys in the beginning of the film, you know right away who you’re rooting against in “Us.”

Clad in bright red jumpsuits and armed with large trimming shears, the Wilson’s doubles look human but are … off. They look like the family, but they’re not exact clones of their victims.

In an almost constant game of hide and seek, the audience gets comfortable with the anxiety of the chase, perhaps losing some of the gritty fear that gripped us wholeheartedly in the trailer.

Peele adds some needed lightness to the film by pairing fear with laughter. Gabe’s groan-worthy awkwardness and dad jokes remind us of his humanness, which is especially apparent when paired against his dejected and quiet shadow self.

Peele takes the time to humanize his main characters by showing their intimacy with each other, which makes his twist at the end all the more shocking.

Twisting conceptions of the romanticized boardwalk carnival and the modern nuclear family, Peele challenges viewers to examine his tropes closely. Throughout its almost two hours, “Us” reveals itself as more than just a scary movie, tying in themes of belonging, otherness and national identity to couple the basic horror of the plot.

Much like in “Get Out,” Peele steeps in subtle background information and details for the audience to notice and hold onto. (Hint: keep an eye out for rabbits and the Hands Across America commercial.)

Although these details certainly add a level of complexity to the film, it can overwhelm the premise at times, which comes across as cluttered. It’s easy to poke holes in the plot, and there are many questions left unanswered by the end of the film. That being said, “Us” still marks itself as a must-watch for 2019.

For those who aren’t afraid to be a little unnerved: get your tickets now.