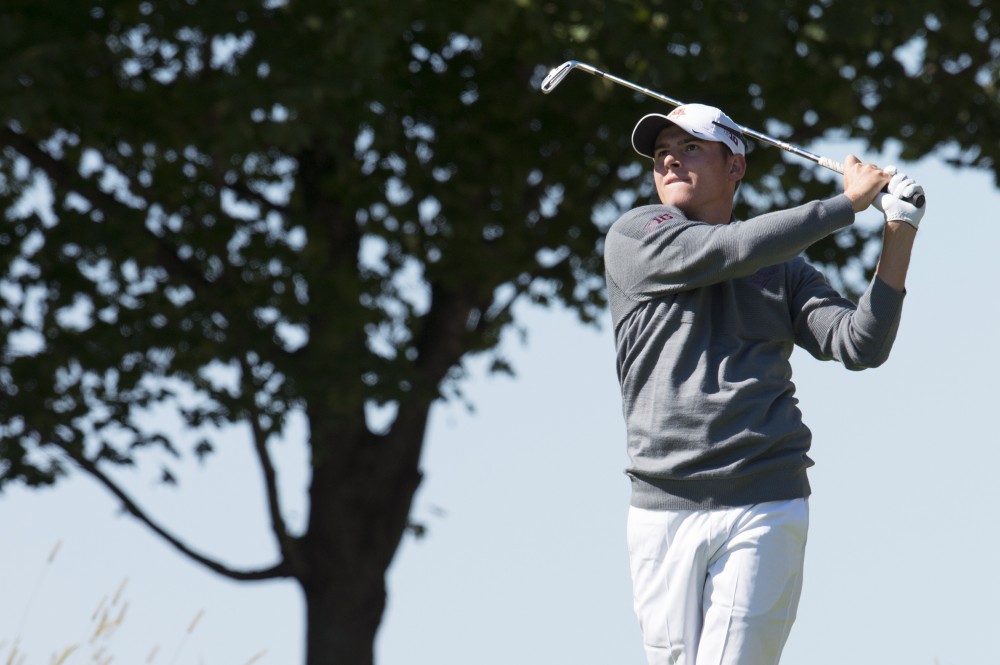 Riley Johnson plays at the Windsong Golf Club during the Gopher Invitational on Sept. 13, 2015.

Minnesota was back in action for the first time since the Big Ten Match Play. It traveled down to Houston to play in a golf-dual meet against the Cougars.

This is the only time in the spring that Minnesota faces off against one other team.

Minnesota lost to Houston in the head-to-head battle on Saturday. The Gophers had a total score of 382, while the Cougars had a score of 357. The tournament had six players competing on each team and the top five scores from each team were kept. Senior Runar Arnorsson led the Gophers by tying for fourth, shooting 73.

Head coach Justin Smith said he wasn’t just focused on dual match Saturday, but about playing three rounds on the weekend in outdoor conditions. The Gophers played 18 holes on Friday, Saturday and Sunday in preparation for the Tiger Invitational in Alabama next weekend.

“We have been practicing indoors and for us to be able to play on Bermuda grass and battle conditions we will see next weekend was really important,” Smith said.

Senior Riley Johnson and freshman Evan Long both tied for 11th with scores of 77. Freshman Angus Flanagan did not play his best as he shot 80 on the day.

Three other Gophers played individually, meaning they competed but did not factor into the team score. Peter Jones shot a 75 for a tie for eighth. Alex Uloth, who played with Jones, shot an 81. Charlie Duensing rounded out the leaderboard for the Gophers, shooting an 82.

Auburn University will play host to the Tiger Invitational next weekend.

“It will be important in the practice round to get used to the Bermuda grass and get the speed of the greens correct,” Smith said.