Didn’t get a UMN safety notification? Here’s why. 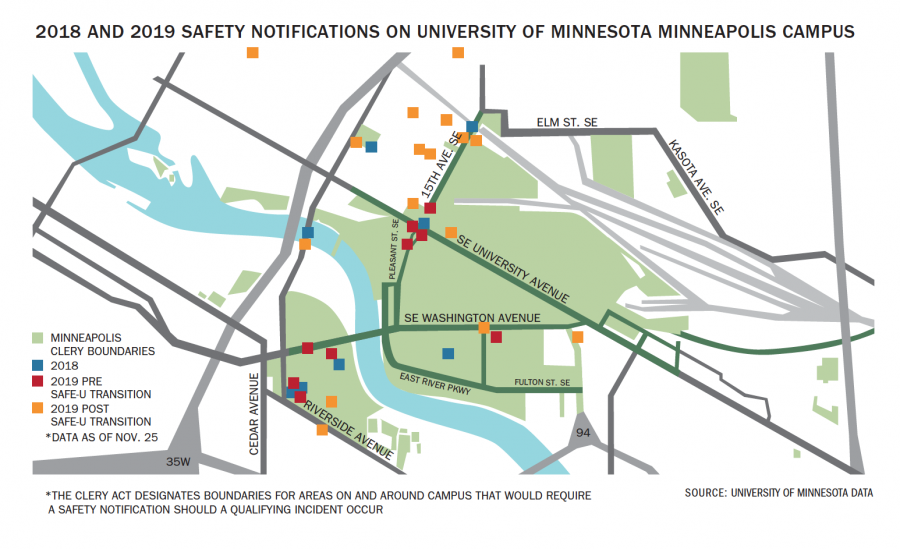 University of Minnesota students may have noticed more safety alerts in their school inboxes this year. That’s because there have been.

With more than a month left in 2019, the 25 campus-wide emergency notifications sent out this year exceed every year since 2011.

SAFE-U alerts became the University’s safety notification system at the beginning of this academic year. These alerts are categorized by threat level and can take the form of email, call or text depending on urgency.

University officials say this new system has made for quicker alerts and wider-reaching information.

The University’s process and federal guidelines

The University’s criteria for sending out safety notifications is largely based on a federal statute known as the Clery Act. The Clery Act requires public colleges and universities that receive federal funding to notify the campus system when a crime or other incident poses a threat to campus.

The Clery Act specifically designates boundaries for areas on and around campus that would require a safety notification should a qualifying incident occur. These crimes can include, but are not limited to, homicide, robbery, assault, rape, theft or other threats including severe weather.

These threats do not include incidents in which a suspect has already been apprehended.

Whether or not an incident poses a threat to campus can be up to interpretation. And while the policy’s specifics have changed since its inception in 1990, the University looks to the U.S. Department of Education for guidance on complying, said Vice President of University Services Mike Berthelsen.

“Best practices that sort of are emerging, as we both learned from ourselves and I think the federal government and Department of Education, sort of adapt over time to ‘what does [the Clery Act] mean?’” Berthelsen said. But incidents occurring outside these boundaries have raised concerns about inconsistencies in reporting. Recent crimes in Marcy-Holmes have sparked multiple safety meetings this year.

At the inaugural meeting of the Marcy Holmes Neighborhood Association’s Safety Committee earlier this month, residents and community members gathered to discuss various issues related to safety following an uptick in crime in the area.

Meeting attendees specifically expressed confusion and concern regarding the consistency of the University’s emergency notification system. They questioned why one violent crime this fall received an alert while another violent crime on the same block did not.

“The University has to [take] a serious look at their policy for how they send out the alerts,” MHNA Vice President Erich Wunderlich said at the meeting. “The fact of the matter is a huge percentage of the people within the neighborhood are students.”

Fourth-year University student Raymond Korte, who lives a few blocks from campus, said he thinks the University’s emergency notification system works as an effective crime prevention measure. But when a serious crime occurs in an off-campus neighborhood and a SAFE-U alert does not follow, many students living in those areas aren’t afforded that same awareness, he said.

“Everyone in those areas should be aware of what’s going on, as well as people that live right on campus, because those are still just a mile or two away,” Korte said. “It’s important for their own safety that they can change the actions that they take and where they go and when.”

In September, an attempted abduction was reported in Marcy-Holmes on the 400 block of 6th St. SE., outside of Clery boundaries. This incident resulted in a University safety notification being sent to the campus community.

On that same block, a homicide by stabbing left one dead the next month. This incident did not result in a safety notification.

Berthelsen said the attempted abduction resulted in a notification because local authorities believed the incident could be part of a larger trend that targeted students. The same could not be said for the stabbing.

“So we chose to act on the one because it was about … students and appeared to be a pattern. That was the request of the city of Minneapolis to do something,” Berthelsen said.

As with many off-campus incidents, the Minneapolis Police Department was the lead agency on the attempted abduction. MPD spokesperson John Elder said the department communicates with the University about crimes outside Clery boundaries that could indicate patterns or pose a threat to students. But MPD does not have a say in whether or not the school sends a notification.

Other resources and community outreach

While University alerts are often limited to incidents that occur within Clery boundaries, other options exist for students living off-campus. The city of Minneapolis and MPD distribute alerts independent of the University’s system, and MPD’s crime prevention specialists provide information relating to serious crimes and trends to residents in their precincts.

Cody Hoerning, OCL neighborhood liaison and Southeast Como Improvement Association board member, said the report is an attempt to fill an information gap by compiling crime information for students that may not come as timely warnings or SAFE-U alerts.

Hoerning said the transient nature of students, who live in the neighborhoods for short periods of time, results in low student involvement in neighborhood groups and utilization of those resources.

“There are avenues, it’s just getting people to the meetings and getting people involved,” Hoerning said. “It just usually takes coming to a meeting a month or so to … get involved with some of these safety and mobility concerns that people may have.”