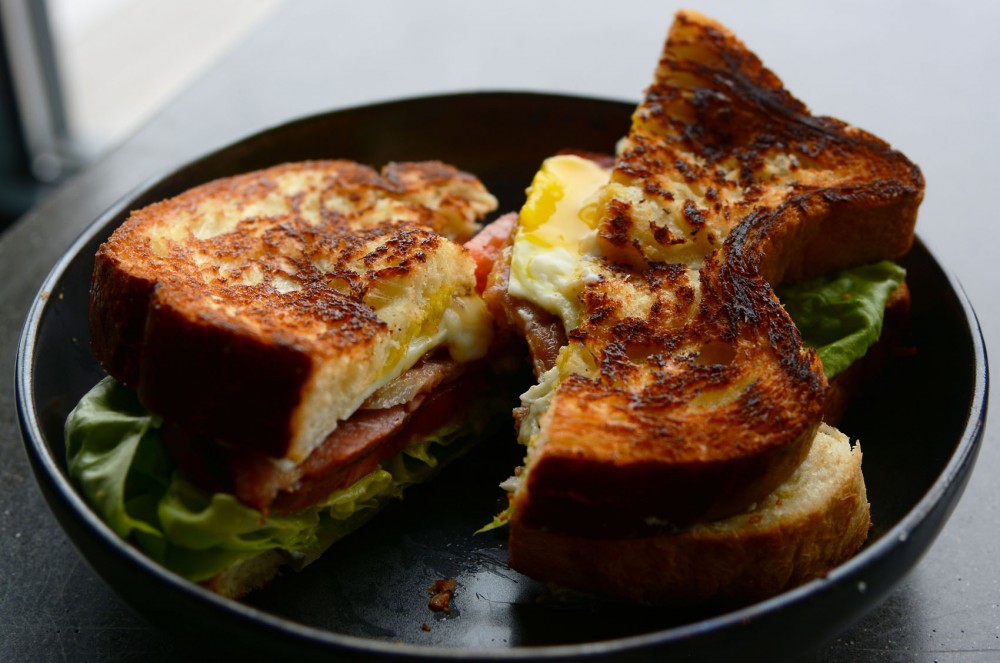 Look to upgrade your normal BLT with a bacon weave and fried egg.

Every foodie in the Twin Cities is anticipating the return of chef Jamie Malone and her new restaurant, Brut.

Malone, who was one of Food and Wine’s best new chefs in 2013 , talked to A&E about running her new restaurant with her partner and fellow chef Erik Anderson.

What is your background as a chef?
I’ve been working in restaurants since I was 16,.  tThen, I decided to go to [(Le Cordon Bleu  culinary school in Mendota Heights]).

After culinary school, I got my internship at La Belle Vie, and then from La Belle Vie,  I went to open Porter and Frye  with Steven Brown . After that, I opened the first Barrio  downtown, so still in the Tim McKee  theme.

Then, he opened Sea Change , so I went over there and did that opening. I took a brief hiatus from Sea Change to open Cocina del Barrio in Edina.

I came back to Sea Change,, and when Erik  left to go to Noma,,  I took over as the executive chef.

I left Sea Change last summer, and I’ve been doing consulting [work] and pop ups, and working on finding a space for Brut in the meantime.

So why stay in Minneapolis?
I traveled a bunch, and I’ve done some extended traveling. I’ve been out of the country for lengths of time. But I’ve never had a desire to live anywhere else.
I’m close to my family; I’ve had the same friends since I was four years old. I’m just grounded and content — I love our city.

It’s a good balance for me, as [Minneapolis is] a close community,, but there’s still a lot going on — a lot of diversity and arts.

It’s easy to live here; it’s nice. And I can travel whenever I want, so that works out, too.

So [being abroad] definitely did [shape me]. I learned a lot about food, I was paying attention to food.

At the time, I knew I loved cooking, and I was interested in it. But I didn’t know I wanted to be a professional cook. Food was the focus of my trip, but not as a chef.

How are you inspired?
I try to read a lot of historical cookbooks, and that’s typically what gets me most excited about cookery. I really like modern books, too, but typically they are about someone’s personal style of cooking — it’s not so much influential as just enlightening and educational.

How has the Minneapolis dining scene changed?
A whole new generation of cooks are now chefs, and everyone is finding their place in the dining scene. It’s really exciting.

The biggest change in the culinary scene is that [in] Minneapolis, and across the country, cooks with fine dining backgrounds are starting to open more casual restaurants that are more experience- conscious than just food- conscious.

To see all the different levels of people doing that is really exciting.

How do you feel being a part of a man-dominated field?
It’s never been something I’ve paid attention to. I never felt a lack of opportunity, and I’ve always felt like I’ve been noticed for hard work, and that’s all that matters to me.

What is your non-work life like?
I eat out a lot, as much I can. (Some of the restaurants that chefs Malone and Anderson frequent are Burchand Heyday.)

Erik and I have three dogs altogether, so we spend a lot of time with [our] dogs.

And reading. And I do yoga a lot. That’s about it, though. Traveling, I guess.

Opening date
Everything is looking like it should happen this fall.

Location
We live in the North Loop, so we want the restaurant to be where we live. We want to be connected to the neighborhood that we’re working in. So, that’s where we’re focused on.

Inspiration
It’s going to be called Brut, so there’s going to be a heavy emphasis on not just champagne but sparkling wines from all around the world. And we’re hoping for a very creative and unique champagne and wine list, in general.

Erik and I really love classic French cookery, so we’re going to take a lot of cues from that, but still continue to cook in both of our modern styles.

You’re probably going to see a lot of shellfish and some really well-aged beef.

We want it to be a place where you can come a couple times a week — a neighborhood spot.

We want a bar menu where you can go and have a few bites, and you don’t break the bank. Because I don’t think there is enough of that around.

I think everyone wants to be high end and charge $30 an entreée, and that’s great, but we’re not in a balance right now where we have a little of both. We also want the dining room to be a tasting menu and serve a special meal that we’ve curated for people.

“You get bacon in every bite,” Jamie Malone said.

1. Cut the slices of bacon in half and weave the slices to make a bacon weave.
2. Put the bacon weave into a 375 degree oven. It’ll take about 15 to 20 minutes to cook and crisp.
3. While the bacon is in the oven, spread a generous amount of butter on one side of two slices of bread.
4. Warm up a skillet on medium-low heat, and throw on the slices of bread, b. Butter side down.
5. Let the bread toast. To get a nice even toast, it’ll take about five minutes.
6. While the bread is toasting, cut the tomatoes into nice slices. Make sure to season the tomatoes with some salt and pepper.
(Chef tip: Malone recommends using a serrated knife to cut the tomatoes.)
7. Check on the bread, and take it off the heat once it’s nicely toasted. Let it cool down a little bit before smearing mayo on its other side.
8. Using a small skillet, fry up an egg.
9. Assemble the sandwich with some lettuce, tomatoes, a few slices of pickles, the beautiful bacon weave and the fried egg.