A team of U students is helping craft and launch a campaign for local honey company, the Beez Kneez, as it plans to expand. 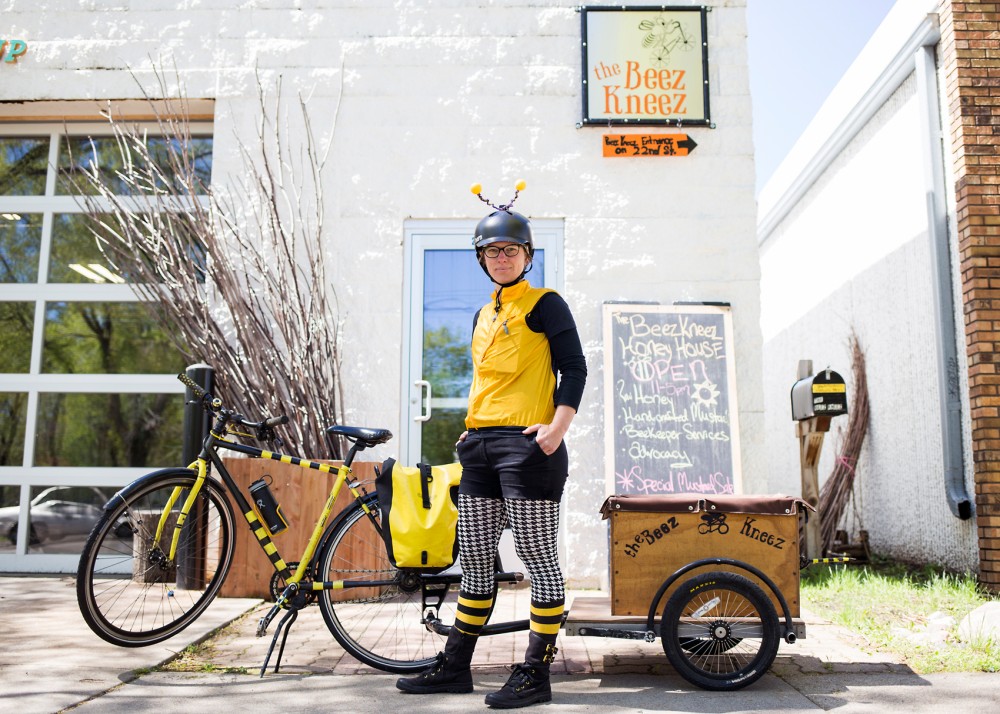 Suited up to resemble a bee, founder and beekeeper Kristy Lynn Allen poses for a portrait outside of The Beez Kneez in Minneapolis on Friday. In addition to the LLC's efforts to educate the public about beekeeping in the Twin Cities, Allen delivers both honey and live bees throughout the community via her bicycle.

Hannah Weikel
Buzzing from storefronts to homes, museums and green spaces, Kristy Allen and her flying friends share a black-and-yellow-striped uniform — and a love of honey.
Allen began harvesting natural honey in 2008, and her company, the Beez Kneez, has since become a local commercial success. Between state Capitol visits to advocate for pollinator protections, launching new non-honey products and tending to her bees, she welcomed help from four University of Minnesota students on a new marketing campaign.
Jamilyn Gereau, a strategic communications senior, said she works with Allen as part of a marketing class where students find new ways to raise awareness of local businesses and nonprofits.
University journalism teaching specialist John Marinovich, who teaches the class, said he encourages students to find products that are less conventional and then create a strong online presence for the business.
“The group needs to have a marketing need,” Marinovich said. “Students are working on creating awareness, generating more online traffic and putting things on social media.”
He said students make campaigns that are simple, cheap and easy to use. If the companies decide to turn their ideas into real marketing strategies, the students also build budgets.
“Most every business has a Facebook page, but they are rarely well-managed,” he said. “What most students are suggesting is Snapchat and Instagram because they’re free but require upkeep.”
Gereau said Allen has already found a unique niche for the Beez Kneez in the Twin Cities with her locally sourced products.
She said Allen worries the business overpromotes the honey because it’s a popular product that is completely dependent on the bees’ output.
“She’s really invested her life in the bees,” Gereau said. “Everything she does is keeping them in mind.”
So the team suggested Allen revamp a line of mustards she launched last fall to expand on that success.
“It’s just that not a lot of people know about it,” Gereau said, “With the Beez Kneez label, you don’t really think of mustard … but once they try it, they love it.”
Allen started keeping bees after spending a summer with her uncle, Edward Menefee and his wife Eileen on their 40-acre farm in northern Minnesota.
Menefee traced his own beekeeping to family legacy. When his grandmother died, he found equipment in her house. He started with a few hives, but he and his kids now keep hundreds across the sstate.
He said he and Allen don’t process their honey, which led to her business’s moniker — as bee parts and pollen are often found suspended into natural honey.
Menefee said his farm’s honey is mostly sold to family and friends, who are now proud Allen has shared it throughout the Twin Cities.
“I always tell people if they’re in the Cities, you know, have you heard of my niece?” he said. “She’s the one who delivers honey on the bicycle dressed up as a bee.”
Allen runs a storefront in the Seward neighborhood but also sells honey at farmers markets and makes deliveries — snow or shine — on her bike.
“She does a lot. She kind of has her hands in a lot of different ventures with all of the products that she does, and she doesn’t have many employees,” Gereau said.
Delete Image
Align Left
Align Center
Align Right
Align Left
Align Center
Delete Heading