Following a win over Penn State, the No. 5 Gophers now have two weeks off before the Big Ten championships. 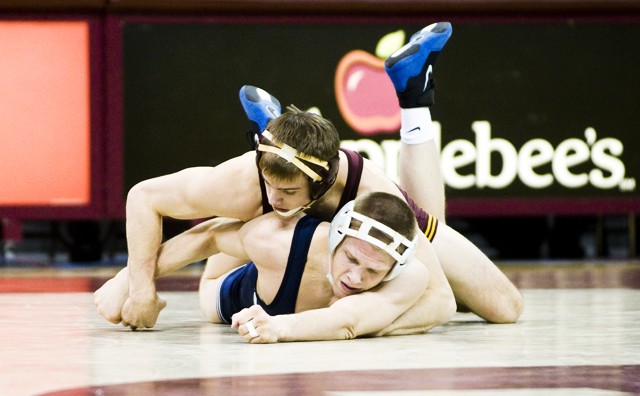 In the final dual meet of the season No. 5 Minnesota beat No. 10 Penn State by a final team score of 26-16 Friday night at the Sports Pavilion. The Gophers now have a two-week break before the Big Ten tournament Mar. 6 and 7 in Ann Arbor, Mich. Minnesota (12-5 overall) finished 7-1 in Big Ten meets for the regular season. The GophersâÄô only loss was to No. 1 Iowa after starting the Big Ten season with a perfect 6-0. Including tournaments, the only teams that defeated the Gophers this season were the teams seeded one through four: Iowa (twice), Ohio State , Oklahoma State and Iowa State . The Gophers once again started out in a hole after forfeiting at 125 pounds to begin the dual due to Zach SandersâÄô injury. Minnesota looked to senior leader Jayson Ness (133) to score some points and erase the deficit. Ness did just that, recording a fall just 1:17 into the first period, evening the score at 6-6. The fall was NessâÄô 17th of the season and put him just four pins shy of the school single-season pins record co-owned by himself and former head assistant coach Marty Morgan . The victory was the 140th of his career. Ness is just the fourth Gopher wrestler ever to achieve that feat. Ness finishes his career with Minnesota with an undefeated record in home dual meets. âÄúThe last four years have gone by way too quick. It seems like yesterday I was freshman,âÄù Ness said. âÄúItâÄôs just been an awesome experience.âÄù No. 6 Mike Thorn ( 141) gave the Gophers a 12-6 lead by recording a fall just 2:18 into his match. It was a lead Minnesota would never relinquish, winning four of the remaining seven matches. Senior Dustin Schlatter (157) also finished a dazzling career with Minnesota Friday night, shutting out his opponent and winning by decision 4-0. The victory was SchlatterâÄôs 17th consecutive and caps an impressive season in which he wrestled to a 13-1 overall record âÄî 5-0 in the Big Ten âÄî at 157. Schlatter is a two-time Big Ten champion and a three-time All-American and will leave the Gophers with just one home loss. Ness has also been named an All-American three times so far in his caree r. Both will likely be named All-Americans for the fourth time in their storied careers and become the fifth and sixth four-time All-Americans ever for Minnesota . FridayâÄôs dual was senior night, and the Gophers honored seniors Matthew Everson and Nate Matousek along with Ness and Schlatter. Minnesota finished the season on a positive note after being beaten badly by Iowa at home a week ago. Penn State is just the latest top 10 team that the Gophers have beaten, a victory they hope will build momentum going into the Big Ten tournament. âÄúI think the guys wrestled good,âÄù head coach J Robinson said . âÄúWe changed some things up this week in the way we trained and we were looking for an increase of intensity, and I think that happened.âÄù Minnesota hopes to avenge its loss to Iowa and prove that it is a team that can compete with anyone. Friday nightâÄôs victory over No. 10 Penn State was an important starting point for a team with high aspirations this tournament season. âÄúThis is how you get it, you start winning those close ones. ThatâÄôs what we talked about this week,âÄù Robinson said. âÄúIt was a good thing to build on going into the Big Ten.âÄù