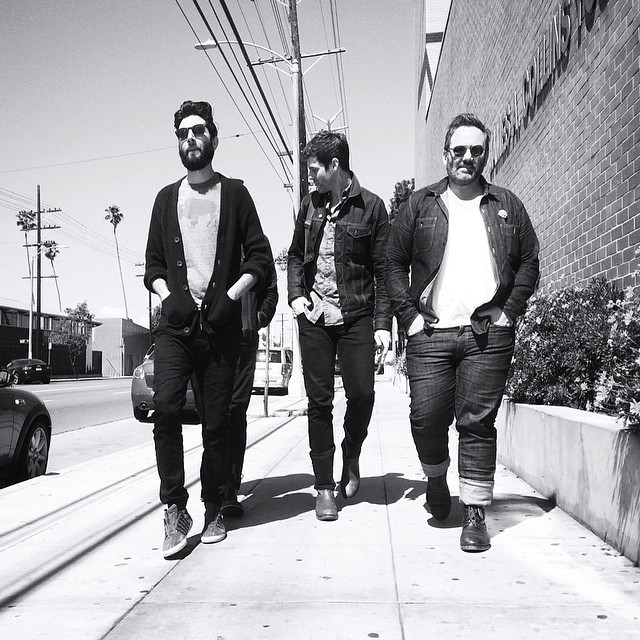 Leagues are a band of happenstance.  They’re proof that things happen when you pick up the phone.

Burkum’s friend called him and Lutito separately, and it turned out both were interested in joining Leagues.  Burkum was curious about who would be the drummer and was floored to discover it was Lutito.

“I was like, ‘We’re on the road together right now,” Burkum said.

The road and the studio are the only time when Leagues are together.  Though Leagues is an indie rock band with a Southern twang, the members hail from various parts of the country — Burkum lives in New Brighton, Minn., while Lutito and vocalist Thad Cockrell represent Nashville, Tenn.

Cockrell attended Liberty University in Lynchburg, Va., before setting out on an alt-country career.

Burkum hails from a musical family — his younger brothers are Minneapolis-based troubadours, the Cactus Blossoms.  He was a guitarist with Grammy-winning Christian rock band Audio Adrenaline and has played with alt-country bands and the Backstreet Boys. But Burkum dismisses these gigs as uninspiring studio work to pay the bills.

“I’m trying to make [Leagues’ music] absolutely nothing like Christian rock at all,” Burkum said.  “This is a chance for me to play what I wanted to play for years but never got to do that.”

Leagues are thankfully a departure from the members’ previous gigs, combining the jangly psychedelica of The Black Keys with the twee peppiness of Ben Folds.

Hints of Nashville are evident on their debut album “You Belong Here.”  A 10-track affair, it was named one of Amazon’s “Top 100 Albums of 2013,” despite garnering little critical and popular attention.  It features Cockrell’s signature succinct, whimsical songwriting, which he honed during his country days.

The opening track, “Spotlight,” is particularly catchy.  It sounds like it should have been on The Black Keys’ “El Camino.” The immediate drumbeat is struck with fervent conviction and is bolstered by the simple two-chord guitar lick.  The first verse is pared down to drums and vocals, creating a ceremonial chant effect.  The band jumps back in with subtle bombast at the refrain, and the guitar solo in the middle of the track is pieced together with vocabulary from The Allman Brothers Band’s Dickey Betts.

Their home-cooked Southern unpretentiousness makes Leagues an intriguing choice for a Spring Jam act, a sharp left turn from the radio-friendly, adult alternative image of the Mowgli’s, the irreverence of Earl Sweatshirt and the driveling Mac Miller.  Leagues were caught off guard when asked to play the festival, something Burkum was at loss to explain.

“Whoever put it together may have heard our music,” he said.

Despite their indie rock status, Leagues are rock ‘n’ rollers aiming for fame.

“We would love to be able to play an arena and not make music for tiny groups of people,” Burkum said.

Fame or no, Leagues are bent on dismantling the misconception that Nashville is merely a country town.

“The country music is the shiny part — it gets all the attention,” Burkum.  “I’ve been working in Nashville for almost 20 years.  There’s a reason why The Black Keys and Jack White live there; you can actually touch the roots of rock ‘n’ roll there, whereas a lot of other places it’s faded away.”