An illustrated approach to sex 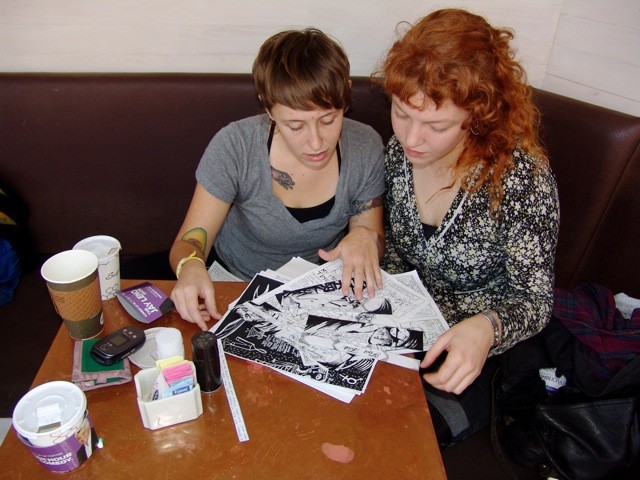 Not Your Mother's Meatloaf

Liza Bley and Saiya Miller sort through loose zine pages at a cafe.

“It’s sort of an expression that means not the same old thing,” Bley said.

“Not Your Mother’s Meatloaf: A Sex Education Comic Book” is a collection of work from more than 50 different artists, all exploring their own sexual experiences.

By focusing on the experience-based comics instead of the instructional, “Not Your Mother’s Meatloaf” encourages discussions about trickier topics like abuse and consent that may otherwise be avoided, especially by youth.

Comics give young people the freedom to declare what their bodies are and how they look, Bley said. And schools are using them as a teaching tool more than ever before.

“Not Your Mother’s Meatloaf” was born out of Bley’s senior project at Eugene Lang College in 2008. Teaming up with Miller, she put out an open call for submissions for a sex education comic book.

The duo received two types of submissions: instructional and experiential.

“It was clear right away that [the experience-based] were the comics that really were the most powerful and that had the most to say,” Bley said.

From 2008 until 2012, submissions were compiled into a total of six zines and were distributed by local zinesters, by hand and online.

“When it was a zine project, we had all of the zines available online for free download,” Bley said. “It was a very anti-copyright, very free operation.”

As the zines grew in size, Bley and Miller realized they needed to try something new and decided to group them together in a book. They pitched the idea to publishers, and Soft Skull Press picked it up in 2012.

“The book is a compilation of comics that were in the zines over the last five years and also new material,” Bley said.

Additionally, Soft Skull asked the duo to write narrative pieces to introduce each chapter. The final product explores a wide range of sexual issues, from transsexuality to abuse.

A comic called “The Appointment,” which tells the story of a woman being sexually abused by a gynecologist, has been of particular interest to reviewers.

“From that comic, we’ve heard that others have had similar experiences with gyno providers or other medical professionals,” Bley said. “We don’t often talk about what those interactions should look like.”

Miller and Bley said that addressing such heavy issues in comic book format is effective for a number of reasons.

“We felt that it was a very accessible form,” Miller said. “A lot of the artists included in the book had maybe never drawn a comic before.”

“Our mantra from the zine was ‘Experiences, not answers,’”***** Bley said. “I think a reader will have to form their own conclusions after reading people’s experiences.”

Miller and Bley are currently touring across the country with their book, doing readings and workshops where attendees can make their own comics.