A secure stroll from A to B

Students in the Security Monitor Program are the “eyes and ears” for police. 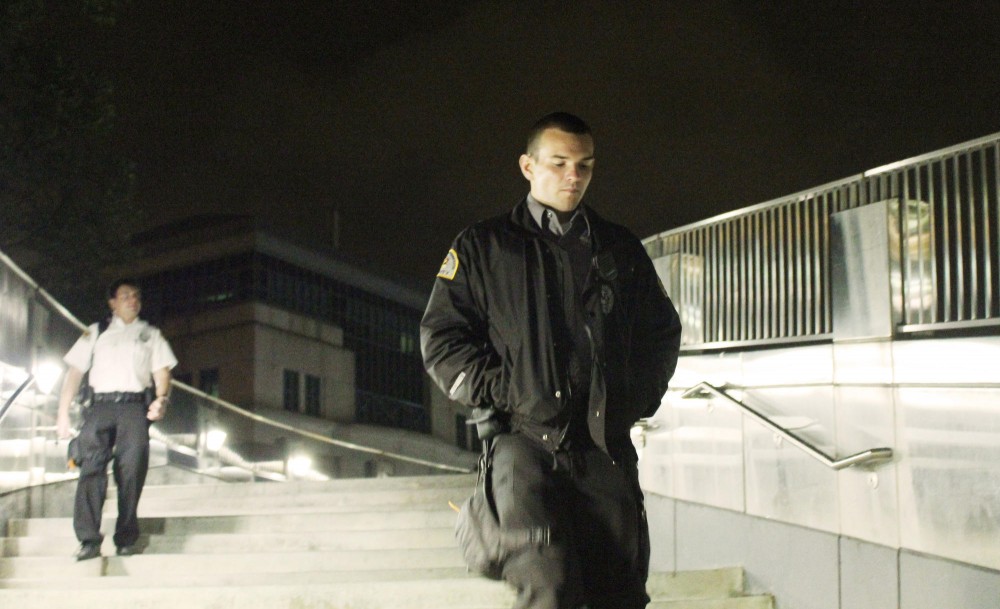 David Ormonde wakes up for his 10 a.m. class Monday after about five hours of sleep. He spends his Sunday nights patrolling the University of Minnesota campus for suspicious activity, like open or unlocked doors and broken windows.

Ormonde is an officer for the Security Monitor Program and doesnâÄôt go home until his shift ends at 4 a.m.

Ormonde also responds to calls for security escorts through the SMPâÄôs 624-WALK escort program, designed as a safety measure for students, staff and faculty as they cross the campus. The program employs about 120 students.

Security officers like Ormonde âÄî who precariously balance sleep, academics and work âÄî will walk anyone to their destination, up to about a mile off campus.

âÄúIt takes a week or two just to get adjusted to the sleep schedule,âÄù Ormonde said.

Yarrington said he was an employee of the SMP when he was a student at the University. He took on a management role in 2008. Fall is the season for new recruits, he said, and the SMP is busy training its new officers.

University police Deputy Chief Chuck Miner said he has seen many students move on from the SMP to find upper-level jobs in the University âÄî three University police officers are former student employees. Others have gone to federal law enforcement positions, he said.

Yarrington said SMP employees are trained to observe and report suspicious activity, focusing on non-physical intervention. Every SMP officer is trained in first aid, CPR and the use of a police radio. Each officer carries a radio and a first aid kit.

Yarrington said the SMP receives between 20 and 30 requests for an escort each night. Ormonde said he escorts between one person and six people throughout a shift.

Security officers walk an average of 10 miles a night when on patrol, Kremenetsky said, but if the volume of calls for escorts increases, the miles can add up.

âÄúIf you get a large number of escorts a night âÄ¦ it can get pretty tiring,âÄù he said.

âÄúItâÄôs a different job than most of your other campus jobs,âÄù Yarrington said.

Ormonde said he heard about the position from a rugby teammate who was a current SMP employee. He needed flexible hours to accommodate both games and classes.

Miner said the program is vital to public safety at the University.

âÄúTheyâÄôre kind of the eyes and ears of the police department,âÄù he said. âÄúThereâÄôs usually more of them working on a particular evening than [there are] police officers.âÄù

Mark Kremenetsky, an SMP supervisor, said patrolling officers have run across trouble, including âÄúvagrants,âÄù in campus buildings and on the grounds.

He said the SMP headquarters has a list with the names and photographs of every person trespassed from any University property hanging prominently on a wall in the office.

âÄúThere are quite a few that we regularly see,âÄù Kremenetsky said. âÄúThey know that we patrol so they do their best to kind of evade us.âÄù

Kremenetsky and Ormonde said performing an escort job is mainly about being a presence in uniform.

âÄúThe primary thing we do is try to take people through well-lit areas,âÄù Kremenetsky said.

Senior Emily Corrigan said she used the escort service during her early years on campus. She said while she didnâÄôt have far to go, having someone there to walk with her was better than walking alone.

Ormonde said he had his share of walking on the job. The longest escort he has performed started on the West Bank and ended east of the University Village.

âÄúIt was actually in the middle of winter and during a fairly heavy snowstorm,âÄù Ormonde said.