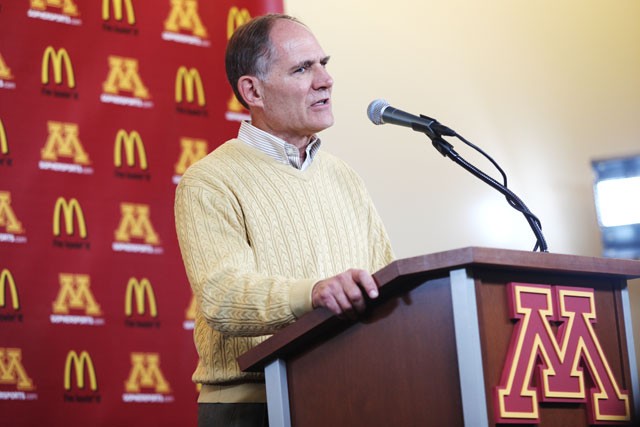 Athletic director Joel Maturi made it clear when he fired Tim Brewster: He doesnâÄôt want another Tim Brewster. He wants another Tubby Smith. The search firm that helped land both of them, Parker Executive Search, will again assist in MinnesotaâÄôs newest coaching search, Maturi said Sunday. The final decision will be MaturiâÄôs, but Parker will help with the arduous task of identifying candidates and gauging preliminary interest. The Atlanta-based company also coordinates interviews and travel logistics, runs background checks on candidates, helps conduct interviews, assists in contract negotiations and maintains a confidential website for those involved with the search process, according to its website. In the last year the firm has helped with notable hirings like Notre Dame football coach Brian Kelly, Iowa menâÄôs basketball coach Fran McCaffery and NCAA President Mark Emmert. âÄúI feel very comfortable with them,âÄù Maturi told WCCO radio hosts Sid Hartman and Dave Mona on Sunday, the first announcement of the agreement. âÄúTheyâÄôre very much in tune to college football.âÄù Mona, who is also a color analyst on Gophers football radio broadcasts, was hired last week as a âÄúspecial assistantâÄù to Maturi and will assist with donor relations, which could be an important part of hiring the Tubby-like coach Maturi is looking for. Maturi has said that he expects to pay more for the new coach than the roughly $1 million Brewster received annually, and University President Robert Bruininks told the Star Tribune earlier this week that he wants a lot of that to come from private funding. ParkerâÄôs site boasts that it can complete most coaching searches in less than two weeks, but the search could take much longer if the Gophers go after someone who is currently coaching. MaturiâÄôs chief rationale for firing Brewster mid-season after a loss to Purdue on Oct. 16 âÄî besides the 1-6 record the Gophers dropped to âÄî was to get a jump start on the search. Thus far, former Texas Tech coach Mike Leach, Vikings defensive coordinator Leslie Frazier and Canadian Football League coach (and former Gophers quarterback) Marc Trestman have been among the loudest names from the rumor mill. Maturi has said he wonâÄôt discuss the search further until a decision is made. âÄúObviously, I hired a football coach that didnâÄôt win enough games, and IâÄôll take responsibility for that,âÄù Maturi said at the press conference announcing BrewsterâÄôs firing. âÄúI think that we have some things in place, and we have some commitments in place that hopefully will make this an attractive position for a coach who can come in here and win more football games.âÄù