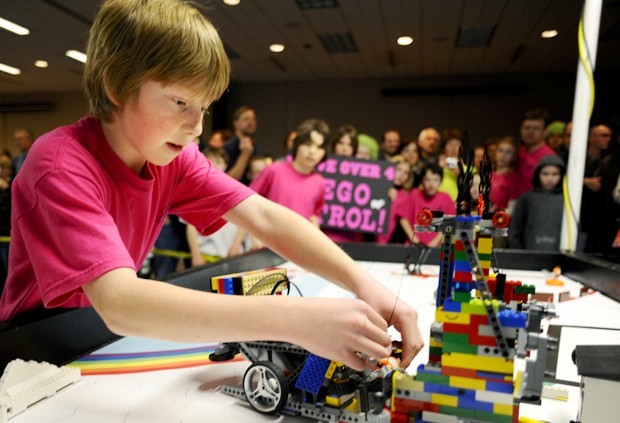 Robbinsdale Spanish Immersion School 5th grader Garret Williams fixes the robot for his team, the Lego Patrol, during their final run at the First Lego League State Championship on Saturday at the Continuing Education building on the St. Paul campus. The competition exposes students to science and technology with environmental emphasis with this year’s theme Climate Connection.

Referees in black and white stripes keep a careful point count as a yelling crowd, decked out in fluorescent green wigs, bright pink t-shirts and other team garb, gazes at the big-screen projections and the announcerâÄôs voice booms. âÄúThe Hurricanes are going for the insulation âÄî and theyâÄôve got it!âÄù the announcer yells as a Lego robot moves âÄúinsulationâÄù from one part of the 4-by-8 foot mat to another. The University of Minnesota hosted hundreds of middle school students this weekend as they demonstrated engineering and programming skills with Lego robots and presented solutions to climate-related problems in their own communities in the statewide F.I.R.S.T. Lego League competition. Sixty-seven teams of up to 10 students competed over the weekend, and âÄúThe DITSci ChxâÄù and âÄúThe Techno TravelersâÄù will advance to May competitions in Ohio and Atlanta, respectively. The teamsâÄô robotics prowess and their climate solutions both figured into their scores. Judges said the topic of climate change was a challenge and many teams had trouble sufficiently narrowing it or making the connection between climate change, the problems it causes and their proposed solutions. Nonetheless, coaches, judges and parents seemed to agree it was a good experience for the kids, as they practiced teamwork and presentations, and engaged themselves with science and engineering in a way thatâÄôs hard to achieve with a textbook. As for the students, their excitement was palpable in the performance room where they cheered as their robots simulated burying carbon dioxide, constructing levees and extracting ice cores.

But their enthusiasm seemed just as clear as they explained their climate research to judges. The members of Robbinsdale Spanish Immersion SchoolâÄôs âÄúLego PatrolâÄù took turns explaining how rain gardens and barrels can be used to mitigate water pollution. The team plans to design, and help dig and plant a rain garden at a St. Paul apartment complex to ease the runoff from its large roof. Students got help starting their climate change research with a visit to the University last October where they attended faculty-run workshops. Soil, water and climate professor Mark Seeley , who gave the keynote presentation, said he discussed evidence of climate change here in Minnesota, including climate records throughout the state that show warming âÄî especially in the winter âÄî over the past 100 years. Anshuman Sharma , a first-time judge for the robot programming and design part of the competition, said he was pleasantly surprised to hear âÄú8-year-olds talking about torque and gear ratios.âÄù He said he often spends a portion of the judging time giving programming tips, and though heâÄôd encountered a rather cocky team Saturday that wasnâÄôt interested in advice, he said his favorite part of judging was interacting with the kids. After the Highland Elementary âÄúGloborobosâÄù explained the workings of their robots to technical judges, team member Olivia Nichols said she liked competing because sheâÄôd never done anything like it before. Fred Rose , Honeywell âÄôs director of technology, founded the nonprofit organization High Tech Kids , which supports MinnesotaâÄôs participation in F.I.R.S.T. Lego League, in 1999. He said itâÄôs important to get middle-school age kids interested in math and science, because thatâÄôs the age at which they tend to decide what they want to do. âÄúThey say science is boring,âÄù he said, and this gets them to make the connection between fun and science. He added his goal wasnâÄôt that they grow up to be engineers, but that they gain the technical literacy to make informed decisions in an increasingly complex world. And, in the words of fifth grade Globorobo member, Nichols, âÄúitâÄôs really fun.âÄù