Caroline Ryba to make 50th consecutive start in the No. 1 singles spot

She started the streak in her sophomore season and has stayed in the No. 1 spot since then. 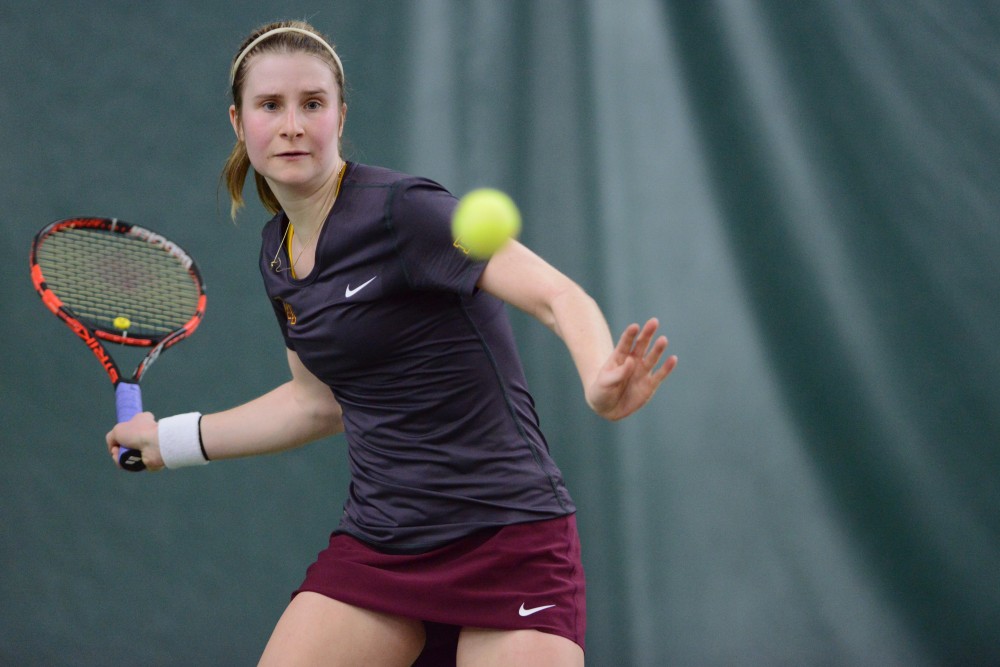 Senior Caroline Ryba has been an essential part of Minnesota her whole career, closing in on her 50th consecutive match in the No. 1 singles spot.

Her strategy isn’t to overpower other players with her serve or to rely on a strong forehand. Instead, she beats her opponents by effort and skill. Placing the shots in the right spots and forcing her opponent to hit as many shots as possible is the way she has become successful.

“I do the basics well, I know my game and how to win matches,” Ryba said. “Doing the little things and being diligent about those little things have really helped.”

She makes her 50th start in the No. 1 singles spot this weekend at the Baseline Tennis Center when the Gophers take on Marquette. In her career, she has accumulated a 69-39 record in singles, starting in various spots before moving to No. 1 position for good.

Her freshman year, she spent time in the No. 1, No. 2 and the No. 3 position. She later found her stride and was given the No. 1 spot her sophomore season. The level of consistency she has shown has impressed new head coach Catrina Thompson, who has only known Ryba for half a year.

“Playing at the top spot is never easy, you never have an easy match, you have to earn every point,” Thompson said. “She never stops competing, she never stops fighting and you know whether win or lose you know she gave it her all that day.”

Ryba was recruited out of high school by former Minnesota head coach Chuck Merzbacher, who is now the head coach of the University of Tennessee, Chattanooga men’s tennis team. Ryba’s only goal coming into Minnesota was to make the lineup. She did not even imagine starting in the first singles spot once, let alone 50 times in a row.

Ryba found out that she may be cut out for the top position after a match in her sophomore year. Minnesota took on Wisconsin and she was set to take on a top-50 opponent.

Her dad and one of her good friends from Illinois traveled to the match to watch. Ryba took the first set in a close one. She remembered feeling like she was down the whole second set and was beginning to mentally prepare for the third set.

However, her opponent made some errors that allowed her to get back into it. By that time, the rest of the Gophers had finished their match and the meet was going to be decided by Ryba. As her teammates lined the sidelines and cheered from a short distance away on each point, the second set reached a tiebreaker.

Her opponent served the ball into the net twice and Ryba claimed the victory for the Gophers.

“I just remember it felt amazing because my dad and one of my close friends were there,” Ryba said. “I just kept fighting and competing.”

Ryba brings a lot of experience to an otherwise young team. Not only do they have a first-year coach, but they also only have two seniors — Mehvish Safdar  and Ryba, both of whom are co-captains.

Cammy Frei, a sophomore, has been Ryba’s doubles partner for the last two years. She gets an up-close look at how Ryba sets an example for the team.

“Caroline has the mindset that you just have to keep working and if you work hard enough it will pay off,” Frei said. “She works hard in really anything she does, whether it is on the court or in school.”

Along with being a two-time All-Big Ten athlete, Ryba majors in chemical engineering. The senior said she has one more year left in her major program and plans to look for a job after she has graduated.

“I treat a match like an exam or something like that,” Ryba said. “What you do weeks or days before an exam or match makes a big difference.”