Minnesota cut the lead to three before UNC went on a late run to close the game. 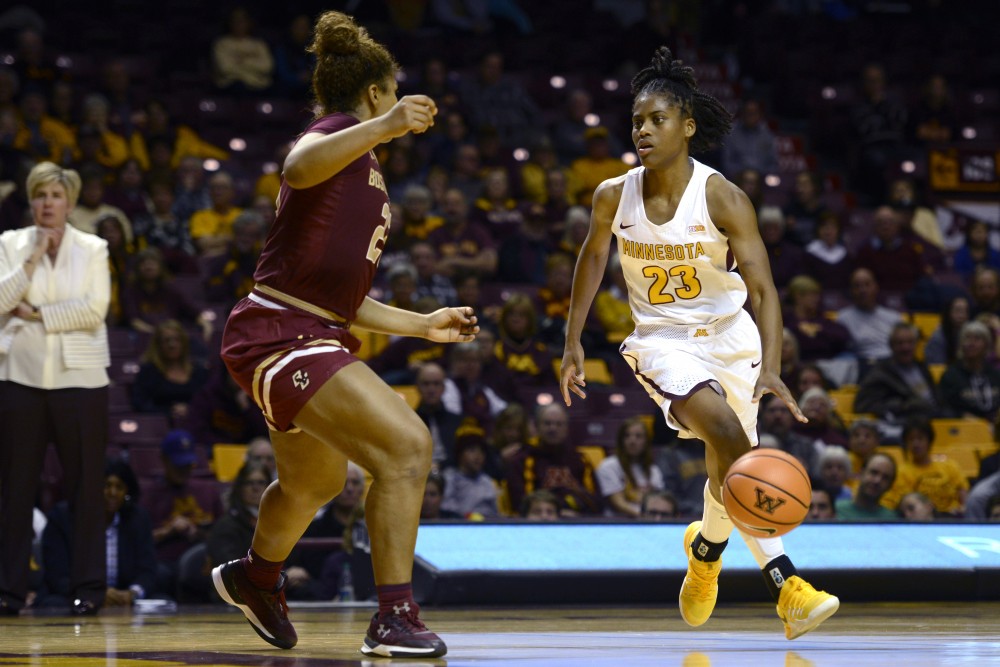 After matching the best start to a season in a decade, Minnesota was forced into a situation it hasn’t been used to — playing in a close game.

Minnesota, now 7-1, lost to the University of North Carolina (4-2) 88-83 Wednesday in Chapel Hill after tying the best start of the season since 2003-04 with an undefeated record and seven wins.

Guard Gadiva Hubbard led the Gophers by tying her season high of 25 points, including 5-9 from behind the three-point line. Guard Carlie Wagner finished with 19 points, playing all 40 minutes of the game.

“The defensive end was our biggest challenge today,” Wagner said. “We just didn’t get stops when they were needed, and in our one-on-one defense we struggled. Our energy on the defensive end is the most important part of our game right now. We definitely need to focus on defense.”

After recently being named to the Naismith watch list, Kenisha Bell added 16 points and six assists for the Gophers. Other notable performances came from Jessie Edwards, who finished with eight points and 15 rebounds, and Destiny Pitts, who had seven points. However, Minnesota shot just 41.1 percent from the field compared to the Tar Heels’ 50 percent, a difference that was hard to overcome.

“To their credit, they have a lot of talented guards and they did what they do,” said head coach Marlene Stollings. “But I really thought we just had some lapses and gaps with our energy and that really impacted both ends of the floor.”

UNC had 18 points off the bench versus Minnesota’s nine, but one of the most telling signs from the game that seemed to push the tempo in UNC’s favor came from their mix of attacking the basket and ability to sink three-pointers. The Tar Heels scored 38 of their 88 points in the paint, while shooting 47.1 percent from three.

“Their ability to attack the basket and shoot the ball,” Hubbard said. “They could do both really well.”

By halftime, Minnesota was down 44-36, with the lead up to 12 points at one time. Both Bell and Hubbard dealt with foul trouble in the first half, as the Gophers seemed to lack enough energy to really get something going. Jasmine Brunson came off the bench and had 8 points in the second quarter to give a little life to the team, and by the fourth quarter Minnesota cut the lead to three before UNC went on a late run to close the game.

“They were just more aggressive than us, and that was a big problem,” Wagner said. “We should have come out with more fire and energy.”

Early in the season, on the road and against a team in a highly touted conference, this was definitely a learning experience for the Gophers. Yet, despite the outcome, Minnesota still kept their presence on the boards and transition, out-rebounding UNC 40-39 and scoring 22 fastbreak points, including 18 points off turnovers.

“We went through a pretty challenging stretch here,” Stollings said. “Four games in 11 days, going from East Coast to West Coast, and then playing an afternoon game. I really thought fatigue caught up to us. I think for the first time that impacted us. We needed a spark of energy, and we just couldn’t string it together.”

Minnesota will look to bounce back Sunday, Dec. 3 against Eastern Michigan at Williams Arena.

“We could’ve went 8-0 and we kind of took that for granted,” Hubbard said.