The Gophers only managed one set against Michigan State and Michigan this weekend. 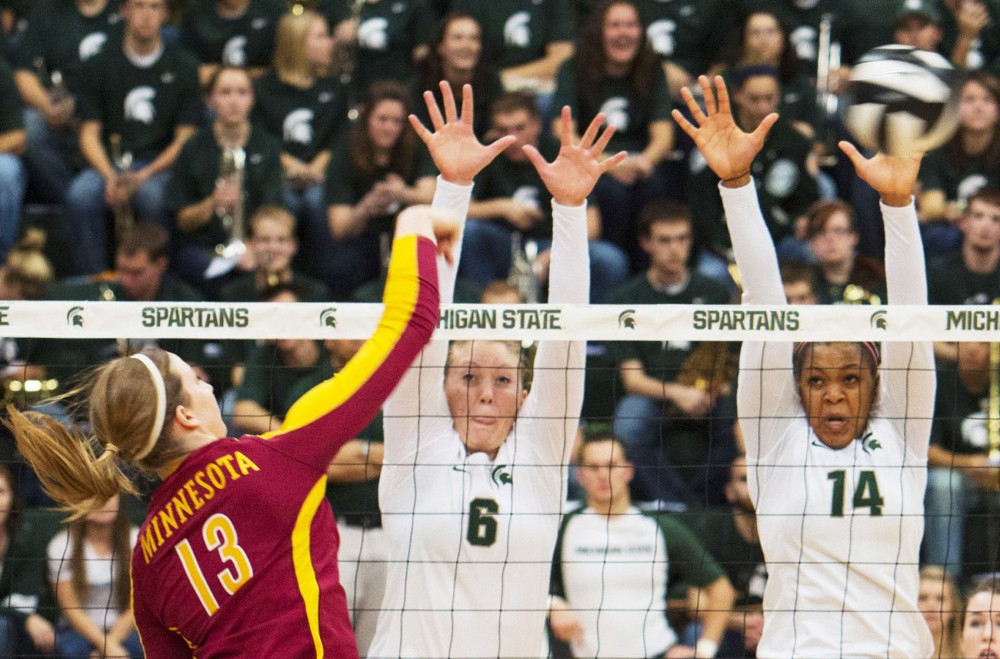 The Gophers volleyball team was sitting pretty entering the weekend.

Ranked No. 10 in the nation and second in the Big Ten, Minnesota looked like an immediate contender in head coach Hugh McCutcheon’s first season.

But this weekend, the Gophers fell off their chair.

“We took a couple on the chin,” McCutcheon said.

“We weren’t as focused on ourselves,” junior outside hitter Ashley Wittman said. “So we were more worried about the other team and what the results were going to be at the end.”

Freshman libero Lindsey Lawmaster said she agreed the team was looking ahead too much. She said the players were also too concerned with individual performances.

Against Michigan State, senior outside hitter Katherine Harms carried the team with 16 kills. The second-highest was Wittman with nine. Harms also had four of the team’s seven aces, 13 digs and a block.

But Harms didn’t make as much of an impact against the Wolverines.

Freshman outside hitter Daly Santana led the Gophers with nine kills against Michigan. Harms and middle blockers Tori Dixon and Dana Knudsen each had eight. The Gophers were outblocked 9-5 and had six more attacking errors than Michigan. Minnesota averaged a .253 hitting percentage to Michigan’s .460.

“They read our setters quickly, and they were able to get two blockers on each one of our hitters,” Wittman said. “That could account for passing, too. … It wasn’t too hard to read where the ball was going to go.”

Wittman also said the hitters didn’t play as smartly and tried to hit the ball straight down too often instead of working with the block.

The most surprising statistic for Minnesota, a strong serving team, was that the team failed to record any aces and made six service errors against Michigan.

“Usually we get a little more return out of our serve,” McCutcheon said. “They passed well, and as the pressure of the match increased, our serving became a little more tentative as we were just trying to give ourselves a chance to score.”

Lawmaster said the Gophers weren’t as focused on scoring aces.

“I think we missed too many serves on the weekend, so it’s probably we were just trying to keep it in,” Lawmaster said. “So the serves got a little bit easier and so they had a better chance at passing.”

Lawmaster said the team is still improving its own passing ability.

“It was a bit inconsistent because we would have really good moments of passing and then we would have a little bit of communication issues,” Lawmaster said.

The Gophers fell 20-7 overall and 11-5 in the conference. With Nebraska and Ohio State winning twice this week, the Gophers relinquished their second place in the conference to the Cornhuskers and now share third with the Buckeyes.

Minnesota is four matches out of first place and one match out of second in the Big Ten.

“I think we were definitely disappointed last night after the match in our performance,” Lawmaster said Sunday. “This morning, we move on.”