The Gophers are on a 12-game winning streak. 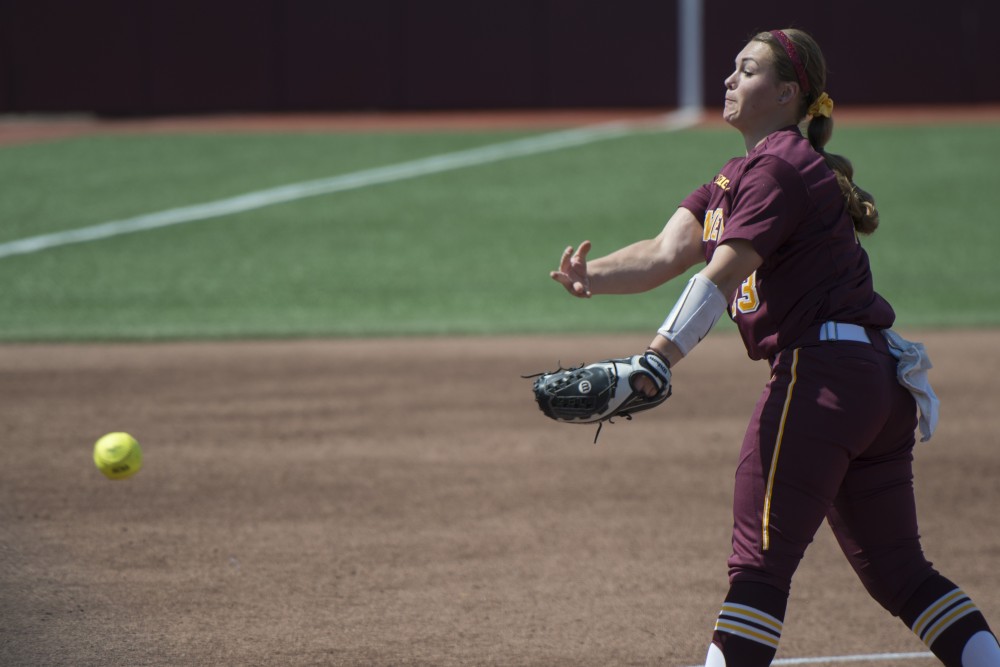 “We’re enjoying each other,” head coach Jamie Trachsel said. “[We’re] enjoying the process, but pretty dialed in and present and focused with each opportunity.”

The Gophers replicated the success they had last season in the month of April. In 2016-17, Minnesota won 19 of 20 games in the month, while this season’s team won 12 of 13 games.

Minnesota got its last series in April underway in record-setting fashion.

Pitcher Amber Fiser has been the team’s No. 1 starter all season; she has appeared in 36 of Minnesota’s 46 games so far. She established herself among a small group of pitchers for the program as she pitched a perfect game — becoming one of five Minnesota pitchers to do so — against Purdue Friday in the five-inning, 9-0 victory.

“I didn’t really realize it until the fourth inning,” Fiser said. “I wouldn’t have been able to do it without the defense behind me, they made absolutely amazing plays and I give all my credit to them.”

Fiser had six strikeouts in the game and had 45 pitches, an average of just three pitches to each batter she faced.

On the offensive side of the ball, the Gophers kept the game short by scoring seven runs in the first three innings. Designated player Allie Arneson hit two home runs Friday — her first two long balls of the season. She tallied six RBIs in the game.

Minnesota continued its winning ways with a 4-0 victory over Purdue Saturday. The offense solidified the victory in addition to Fiser’s continued success.

Fiser didn’t have another perfect game, but she still pitched a shutout. She had six strikeouts through her complete game, allowed five hits and threw 95 pitches.

On offense, second baseman MaKenna Partain led the way. Partain had two RBIs in the game, both from a home run in the first inning. Pinch-hitter Erika Rozell scored a run with a flyout in the sixth and third baseman Danielle Parlich scored a run in the seventh with a single.

Minnesota didn’t start its No. 1 pitcher, but the Gophers won the game thanks to sheer power in the 7-0 victory.

The Gophers opened the game with catcher Kendyl Lindaman as the leadoff hitter. Lindaman hit a home run, her 18th of the season. In the next at-bat, Partain hit a home run herself.

That wasn’t the last set of back-to-back home runs in the game.

In the fourth, Minnesota scored three consecutive home runs from the bats of Parlich, first baseman Sydney Dwyer and centerfielder Dani Wagner. When the Gophers led 5-0, they had just five hits in the game, with the only hits being home runs.

“I’m not typically a home run hitter, so that especially for me was really exciting,” Parlich said. “It just shows the amount of work and grittiness that everyone had approaching the pitchers and going in the [batter’s] box … We just happened to have three really good ones in a row.”