Offense up and down, but Gophers still complete sweep 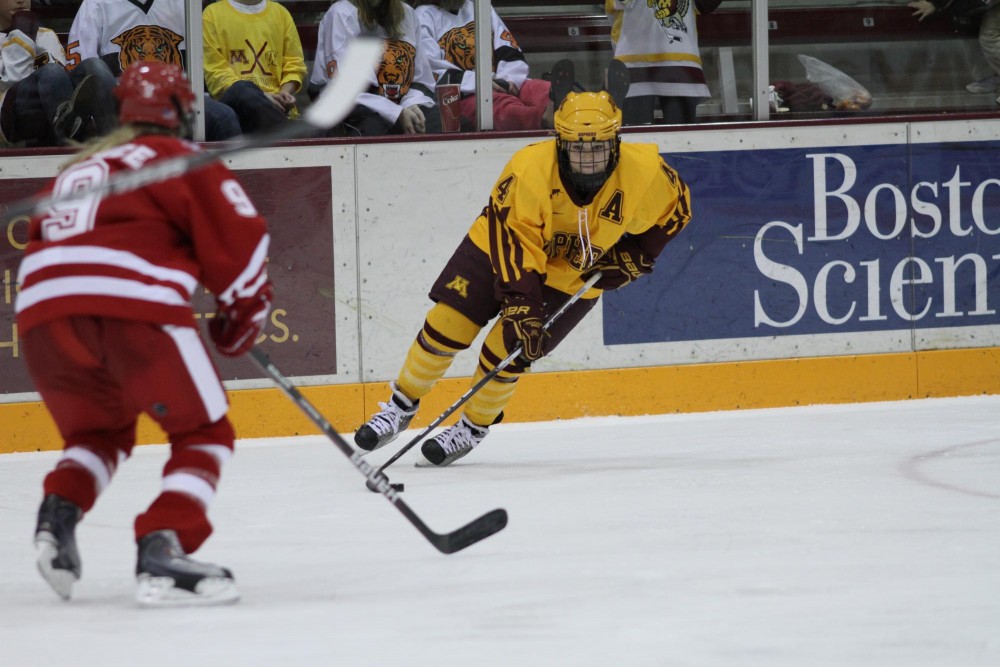 Without arguably their two best forwards Emily West and Amanda Kessel, the Gophers seemed vulnerable to an upset against a Minnesota State team that had won four consecutive games. But the Gophers continued their traditional dominance over the Mavericks thanks to some solid defense and offensive contributions from junior Sarah Erickson and sophomore Becky Kortum, holding on for a 1-0 victory Friday and ratcheting up their offense in a 6-2 win the next night. Erickson filled the void left by West and Kessel with three goals on the weekend, including the lone score Friday, a wrap-around shot midway through the second period. The Gophers, who had a bye last weekend due to the Four Nations Cup tournament, generated only six shots on goal in the first period, their second-lowest total in an opening period this season. âÄúI think it took a period (for us to get going),âÄù Kortum said Saturday. âÄúYesterday, the first period, we werenâÄôt doing too hot, but thatâÄôs expected.âÄù The Gophers ended up with just 23 shots on the night but created better scoring chances as the night wore on. Sophomore Noora Raty made 27 saves, collecting her fifth shutout of the season, as the GophersâÄô defense kept the Mavericks at bay. On Saturday, it was KortumâÄôs turn to lead the charge. Kortum, who leads the Gophers with seven goals, tapped in a one-timer from the left side to give the Gophers a 1-0 lead early in the first and added another midway through the second period. Davis added another goal late in the second, and Erickson and freshman Kelly Terry added third-period goals to help the Gophers counter a late offensive charge by MSU. âÄúTonight it was good to see us get that first one and continue to build the lead, which we couldnâÄôt do last night,âÄù coach Brad Frost said Saturday. With West out of the line up, the line of Davis, Kortum and Terry were reunited. The young line showed why theyâÄôve been MinnesotaâÄôs top-producing line for the majority of the season, tallying eight points in SaturdayâÄôs game. âÄúIt was good to see,âÄù Frost said of the lineâÄôs production. âÄúTheyâÄôre a great line together, and it was good to see the three of them clicking.âÄù Added Kortum: âÄúWe have three different styles of play and we just click. All of our skills work together so that we create offense for the team.âÄù After losing three of their past four games, albeit to top-five nationally ranked teams, the Gophers collected their first sweep in a month and moved back in to the top half of the WCHA standings. With the sweep, the Gophers evened their conference record to 5-5 and avoided what could have been a disastrous weekend. Starting the weekend 12 points out of first place, the Gophers gained six points on Wisconsin, who played non-conference opponent Robert Morris. North Dakota continued its surprise run to the top of the WCHA standings as they swept Saint Cloud State took sole possession of first place. The Fighting Sioux have as many conference wins in 12 games this season as they did the entirety of last season. Kessel, who is second on the team with 12 points, didnâÄôt play this weekend and is still listed as day-to-day after sustaining a shoulder injury against Wisconsin Nov. 5. The status of West, who re-aggravated the injury that kept her out for a month earlier this season, remains unknown.