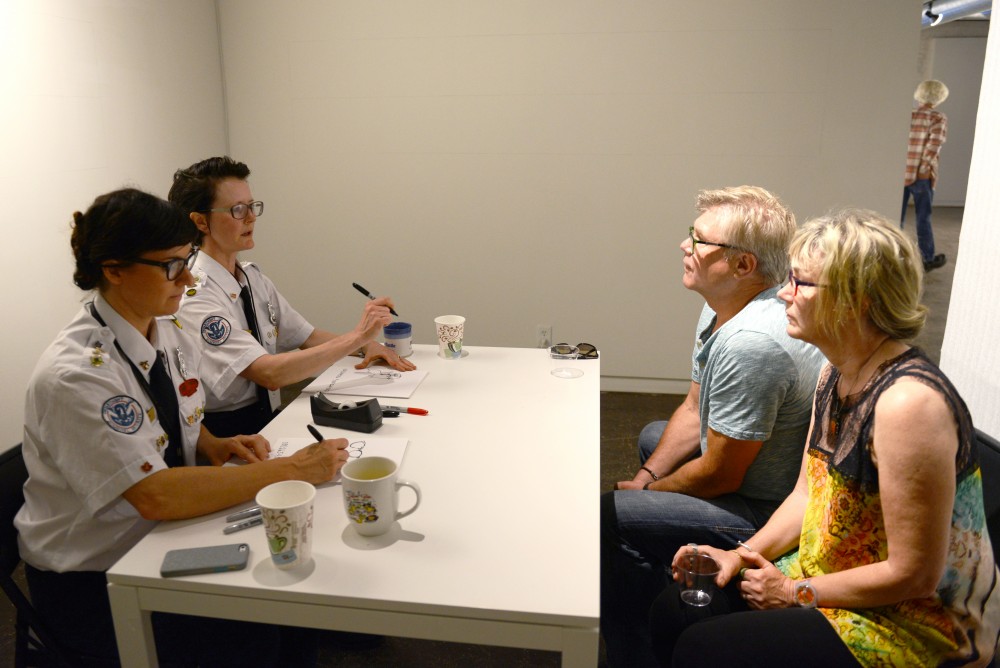 Carl Sutherland and Stacey Modahl are questioned regarding their occupations at the Liar! Liar! exhibit on June 2nd in Minneapolis.

At the exhibit’s entrance, two security guards sternly asked people to remove their shoes and show the contents of their bags. These security guards were merely actors, but apart from a single grumpy senior who wouldn’t remove his shoes, everyone obeyed.

This was precisely what artists Amy Modahl and Corrine Thiessen wanted to reveal with their exhibit Friday at the Soo Visual Arts Center in Minneapolis — our unthinking obedience to anything posing as authority.

“What kind of tacos did you eat? Why chicken and not beef?” Thiessen said, interrogating an exhibit-goer while posing as a lie detecting security agent, which she and her partner did for the entire two hours of the exhibit opening.

The absurdity of the question “Why not beef tacos?” summarizes the entire exhibit — lie detection, state surveillance and other forms of bureaucratic truth-searching are as absurd as National Science Foundation approved witchcraft.

“We were doing a lot of research into lie detection and looking at how the polygraph machines are proven to be inaccurate, yet there’s a business side of it that promotes them,” Modahl said. “We were in Canada three years ago and there was a change in government — just clamping down on civil liberties … it was just a response to the loss of liberties.”

In their exhibit, Modahl and Thiessen approached what they saw as infringements of freedom with carefully planned satire. Their humor was evident down to the details of their uniforms.

“People get off at wearing a uniform,” Thiessen said, referencing border patrol volunteers, mall cops and the campus safety police. “If you looked closely enough at my pins, you’d see that there was a Vladimir Lenin pin … right next to a Led Zeppelin one.”

This conspiratorial paradox was a staple of the exhibit, which often used commonplace phrases and official-sounding jargon to appear sincere. On closer inspection, these details always proved nonsensical.

Members of the audience connected with the exhibit’s theme and general distrust of a distrusting government.

“It’s a very interesting exhibit based on what is going on in the world with fake news and so on,” said Harry Greenberg, a first-year multicultural teaching and learning graduate student at the University of Minnesota.

What exactly was happening Greenberg didn’t elucidate, and neither did the exhibit. But the general feeling of an overbearing and out of control government was there.

If nothing else, it was refreshing to see supporters of both Lenin and Led Zeppelin, an underrepresented social group, finally depicted in a position of power.