FAU suffers drubbing at the hands of undefeated Gophers 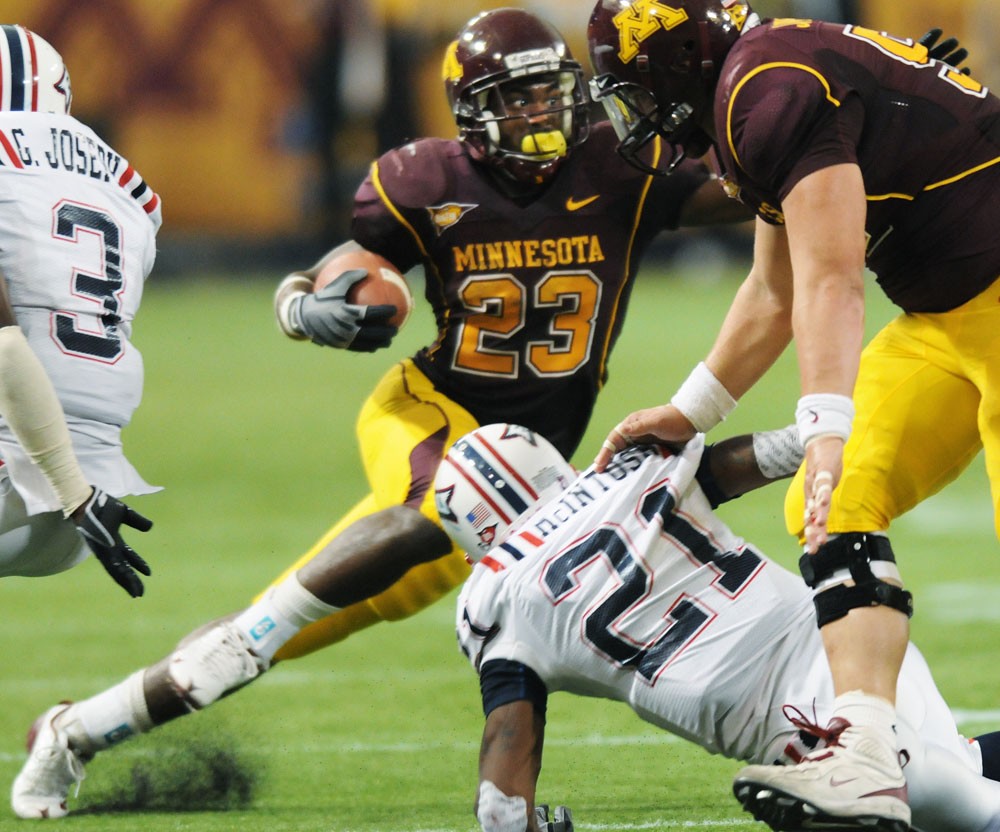 Dominant isnâÄôt a word thatâÄôs been associated with MinnesotaâÄôs defense in recent years. That might have changed. The GophersâÄô defense handled Florida Atlantic in nearly every way Saturday afternoon at the Metrodome, intercepting the ball four times on the way to a 37-3 victory. In three hours under the Dome, Minnesota (4-0 overall, 0-0 Big Ten) erased any memories that still lingered of the 42-39 defeat it suffered to the Owls a year ago under the scorching Florida sun. Thing is, plenty of players on the field this time around for the Gophers didnâÄôt have any memory of the loss to begin with. Free safety Tramaine Brock, a junior college transfer who arrived at Minnesota in January, led the team with eight total tackles Saturday. Fellow junior college transfers Traye Simmons and Simoni Lawrence intercepted Florida Atlantic quarterback Rusty Smith. Simmons, a highly touted cornerback dubbed âÄúBig PlayâÄù Traye, picked off SmithâÄôs second pass attempt of the game. Lawrence, a linebacker, outran a wide receiver to return his interception for a touchdown. True freshman running back DeLeon Eskridge, starting his first game, rushed 19 times for 78 yards and two touchdowns and caught six balls for 61 yards. The newcomers have known nothing but success, as Minnesota is off to its first 4-0 start since 2005. For those back after a 1-11 season, however, itâÄôs been about redemption, and this may be the sweetest yet. To say the wheels came off during the GophersâÄô loss to the Owls (1-3 overall, 0-0 Sun Belt) last September is probably an understatement. The offense turned the ball over seven times. The defense allowed Florida Atlantic to gain 580 yards, 463 of those through the air as Smith picked apart the secondary to throw for five touchdowns. A forgettable performance to say the least, yet one that Minnesota never seemed to be able to shake. The Gophers would go on to lose their remaining nine games . With the way Minnesota played Saturday, however, that game might as well have been a century ago. The OwlsâÄô offense gained only 276 yards , and Smith hardly looked like a quarterback capable of putting up the numbers he did a year ago. He repeatedly threw into double and triple coverage, and his interceptions almost seemed aimed for Gophers defenders. âÄúI never felt like Rusty Smith was comfortable in the pocket,âÄù head coach Tim Brewster said. âÄúI thought our defensive front did a great job getting around his feet, taking him off of his rhythm.âÄù Lawrence even managed to pick up a sack, a rare occurrence against a Florida Atlantic team that often protects the quarterback with seven blockers. It was the first sack the Owls allowed this season. The swarm-and-attack scheme that first-year defensive coordinator Ted Roof has implemented is doing exactly what Brewster hoped it would: Allow his defenders to fly around and make plays. âÄúTheyâÄôre talented football players that are playing in a scheme that allows them to play fast and thatâÄôs what we want to do,âÄù Brewster said. And when the defense does it, the offense gets energized to do the exact same thing, sophomore quarterback Adam Weber said. âÄúWhen you have the defense making plays, that energy carries over onto all aspects and you can feel the momentum sway in the game,âÄù he said. With the momentum, Weber and the offense put on quite a show as well. Apart from throwing his first interception of the season, Weber was as efficient as ever. He was 19-of-24 for 235 yards and a touchdown. The touchdown was to a familiar target, junior wide receiver Eric Decker, who dealt with the OwlsâÄô pesky secondary to rack up 122 yards on seven receptions. The GophersâÄô ground attack was impressive as well, with six different players registering carries for a total of 206 yards. Eskridge took the majority of the snaps but Brewster still did not commit to him as MinnesotaâÄôs back. But if he continues to be an integral part of an offense thatâÄôs putting up 36.2 points per game , heâÄôs well on his way to securing the job. And if the offense continues to put up that many points, the rest of the team can stay relaxed. âÄúItâÄôs not hard to play defense when your offense is putting up 35 or 40 a game,âÄù sophomore strong safety Kyle Theret said.