A 20-0 first-half run was all the Buckeyes needed to win comfortably. 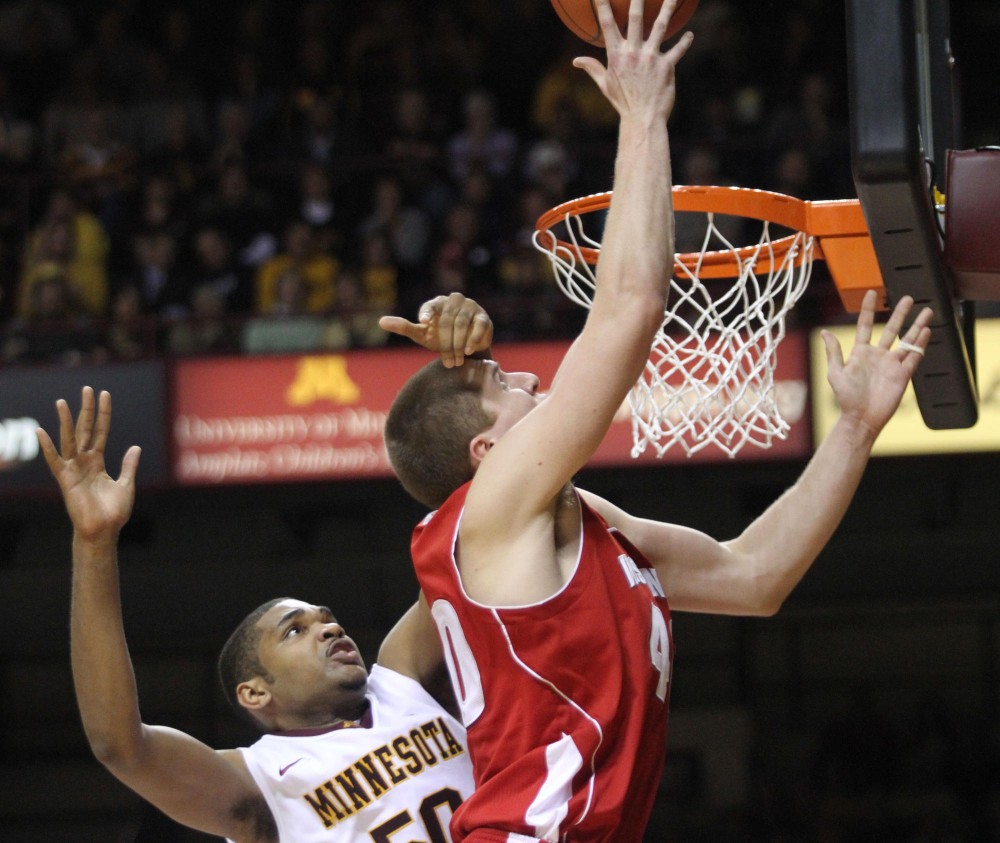 It was only one stretch in the first half, but it was all Ohio State needed.

The Big Ten-leading Buckeyes used a 20-0 run midway through the opening period to put away the Gophers in a 78-68 win Tuesday at Williams Arena.

After falling behind 32-12 with 7:18 left in the first half, Minnesota (5-8 Big Ten) spent the rest of the contest struggling to fight back. Several times in the second half, the Gophers cut the Buckeyes’ lead to single digits, but the result never seemed in doubt.

“I really expect a lot more out of our guys, and I didn’t see it tonight,” head coach Tubby Smith said. “The same thing happened against Wisconsin; we’re not starting the game with the same type of energy and urgency.”

Ohio State (10-3) outhustled Minnesota throughout the game, but it looked especially fierce during its 20-0 run, when it forced six of the Gophers’ 14 turnovers.

Offensively, the Buckeyes put on a clinic, passing out of double teams with poise, rotating the ball from side to side and making shots from all over the court.

Sullinger didn’t dominate the Gophers with his 23 points and eight rebounds, but he played within himself — something he didn’t do in the Buckeyes’ Feb. 11 loss to Michigan State, when he had 10 turnovers and shot 6-for-11 from the field.

“I thought Jared played a very intelligent game tonight,” Ohio State head coach Thad Matta said. “I thought his patience was really good. He read things, and guys got to where they were supposed to be to help him out.”

On defense, the Buckeyes’ high-risk approach was effective enough to keep Minnesota from making a run. Defensive stud Aaron Craft had six of Ohio State’s 10 steals, and Sullinger and Buford stayed out of foul trouble.

Minnesota’s Rodney Williams had 21 points on 8-for-11 shooting and nine rebounds, but he was nowhere to be found during the opening stages of the game.

That prompted Smith to turn to his bench — a strategy that quickly backfired. Backup guards Chip Armelin, Joe Coleman and Maverick Ahanmisi lacked energy and poise as the Buckeyes blew the game open.

“I’m really disappointed in [the bench],” Smith said. “They had been playing pretty well. They start pressing trying to score. … That’s what created that run.”

The rest of the game was a different story, as Minnesota consistently broke down Ohio State’s defense while committing just three turnovers.

Reserve Oto Osenieks scored a career-high 10 points, including seven at the end of the first half to cut Ohio State’s lead to 12 points. The Gophers mounted a 12-3 run to close the half at 40-28.

“Our spirits were definitely high [going into halftime],” Williams said. “It was just that 20-0 run that killed us.”

In the second half, Minnesota never found an answer for Ohio State’s balanced offense, which is as formidable as any in the country when it is clicking.

Smith criticized his team’s defense and selfish play on offense after the game, but he seemed more concerned about the team’s early lack of effort.

“We obviously came in ready to play; they just outworked us on the boards and in a number of different areas,” Smith said. “I was just really disappointed we didn’t get any extra effort.”