Minnesota prepares for road trip with second place on the line

The Gophers are 10-2 on the road this season. 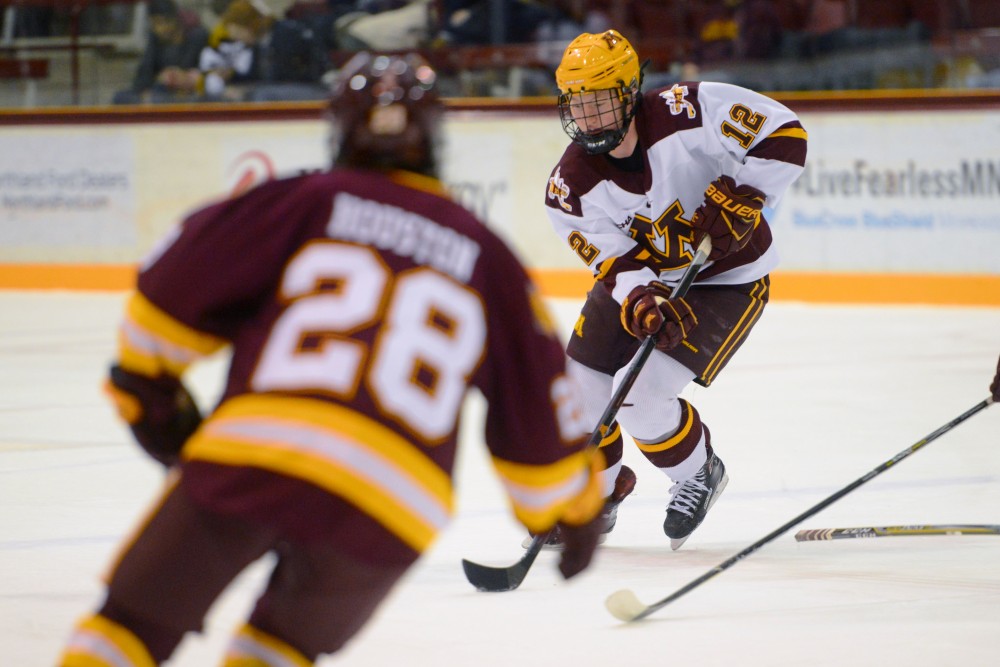 Grace Zumwinkle keeps the puck away from a Minnesota-Duluth player on Friday, Dec. 8, 2017.

Gophers women’s hockey away record is better than its home one, and the team hopes that will continue the next two weeks.

The Gophers will finish the regular season with two road trips to St. Cloud, Minn. and Madison, Wis. Minnesota (19-8-2, 12-6-2-0 WCHA) is second in the WCHA standings and is focused on making its seventh Frozen Four in eight years.

“We have had success on the road for one reason or another,” head coach Brad Frost said. “We need to focus on ourselves and try to get as many points in the bank as we can.”

The Gophers are 10-2 on the road. Before their road losses to Ohio State, the team had a 10-game winning streak away from Ridder Arena.

After Minnesota was swept by Ohio State, it dropped to third in the WCHA standings. However, Ohio State was swept by Duluth last weekend, which allowed the Gophers to take back the second spot and put them in position for an at-large bid in the playoffs.

It has been a transition year for the Gophers. Minnesota lost three players from its roster due to the Winter Olympics. Younger players have had to step up and fill their roles. Minnesota played with four defensemen for much of the season. Some players, like Sophie Skarzynski, had to play both forward and defense.

“The reality is that hockey is a team sport and your role can change every single day,” Skarzynski said. “I have never had a problem with going back and forth and I just want to do what is best for the team.”

Players like freshman standout Grace Zumwinkle and junior Nicole Schammel have had to fill the void in scoring that the Olympic players have left.

Zumwinkle leads the team with 30 points.

Schammel leads Minnesota with 14 goals, one more than Zumwinkle. Schammel sat out a season two years ago after transferring from Mankato State and has found her role in the past few weekends working with her linemates Cara Piazza and Caitlin Reilly.

“Schammel has always been able to score goals and I think this year she is just more comfortable,” Frost said.

The next two weekends will decide the seed Minnesota earns for the WCHA playoffs. For now, the team is focusing on what they can control. Minnesota will travel to take on St. Cloud State (6-17-3, 4-13-3-1 WCHA) on Friday and Saturday, looking to improve their status for the postseason.

“We need to just take it period by period, but I think it is important for us to just focus on the here and now,” Skarzynski said.