Both the women and men had big wins over Wisconsin, Purdue and Illinois. 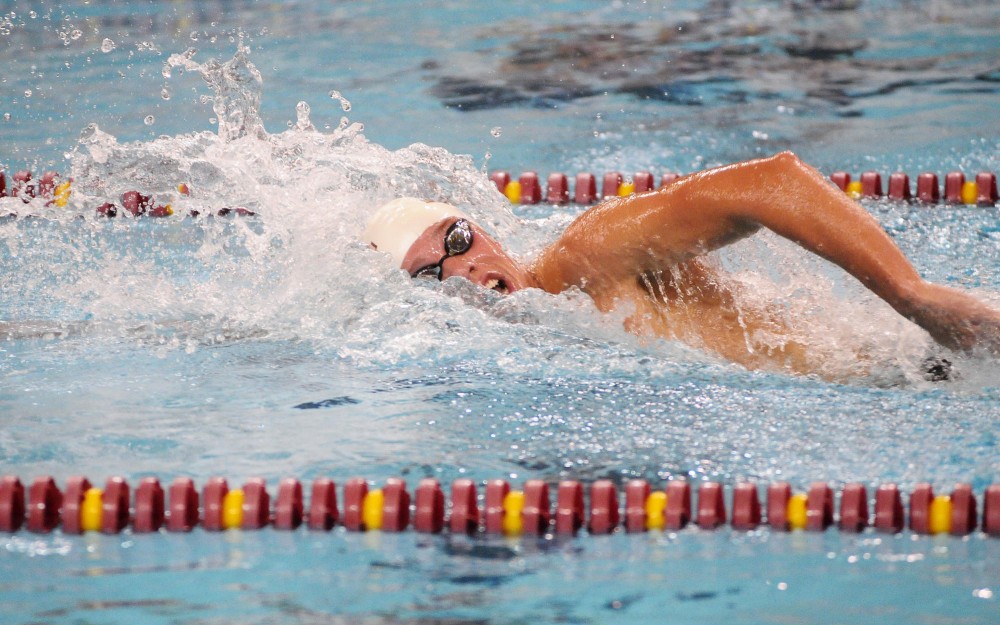 Freshman CJ Smith leads the pack in the 1,000-meter freestyle at the University Aquatic Center on Friday night. Smith took first-place with a time of 9:10.25.

Triple and quad duals took over the University Aquatic Center this weekend as the University of Minnesota menâÄôs and womenâÄôs swimming and diving teams faced Wisconsin, Purdue and Illinois.

âÄúIt was really good and really good at the right time,âÄù menâÄôs head coach Dennis Dale said. âÄúWe came back and won the events we had to win. They swam very well. We probably had the best meet of the year for us.âÄù

Sophomore Kyler Van Swol won the 200-yard butterfly, came in second in the 100 butterfly and was a part of the second-place 800 freestyle relay team. Even with all of his success against Big Ten teams, he said he hesitates to assume victory at the conference championships.

âÄúIt is one thing to beat someone or be beaten in season, but once you are all ready at the end of the year, itâÄôs different.âÄù Van Swol said. âÄúYou never know what is going to happen.âÄù

Senior Zach Bolin championed the 100 freestyle with his best time of the season. He also made the cut for NCAA provisional qualifying.

That same group also earned an NCAA provisional qualifying in its 400 freestyle relay win against Purdue. It was the groupâÄôs best time of the season.

The undefeated Gophers won 11 events out of 19 and continued their dominance on the road to the Big Ten championships.

âÄúWeâÄôve done the work and done everything we need to do to be successful in the championship season,âÄù head womenâÄôs coach Terry Nieszner said. âÄúNow it is fine tuning details and making sure that everything is technically sound and correct and taking care of ourselves outside the pool.âÄù

Sophomore diver Maggie Keefer won both one-meter and three-meter springboard diving. Her score of 340.05 in the three-meter was an NCAA Zone Diving qualifying mark. Teammate Katie Grunawalt qualified as well, and her mark of 315.45 was good for second place.

âÄúI felt really on. WeâÄôre seeing improvements, and all the hard work is paying off right now. All of us are diving so well,âÄù Keefer said. âÄúGoing into Big Ten the way IâÄôm diving against these really good competitors is reassuring that IâÄôll dive this well and score high [at the conference championship meet].âÄù

There were many other notable finishes for the womenâÄôs team. Minnesota won the 400 freestyle relay (freshman Jessica Plant, freshman Tori Simenec, sophomore Erin Caflisch and sophomore Tess Behrens) in a NCAA provisional qualifying time of 3:21.82.

Individually, Behrens finished first in the 100 backstroke and had a NCAA provisional qualifying time. Spencer qualified too, but placed third in the 100 breaststroke.

The menâÄôs and womenâÄôs teams will host the Minnesota Challenge at the Aquatic Center next weekend with competition from around the state.