The freshman is the third member of her family to skate for Minnesota hockey. 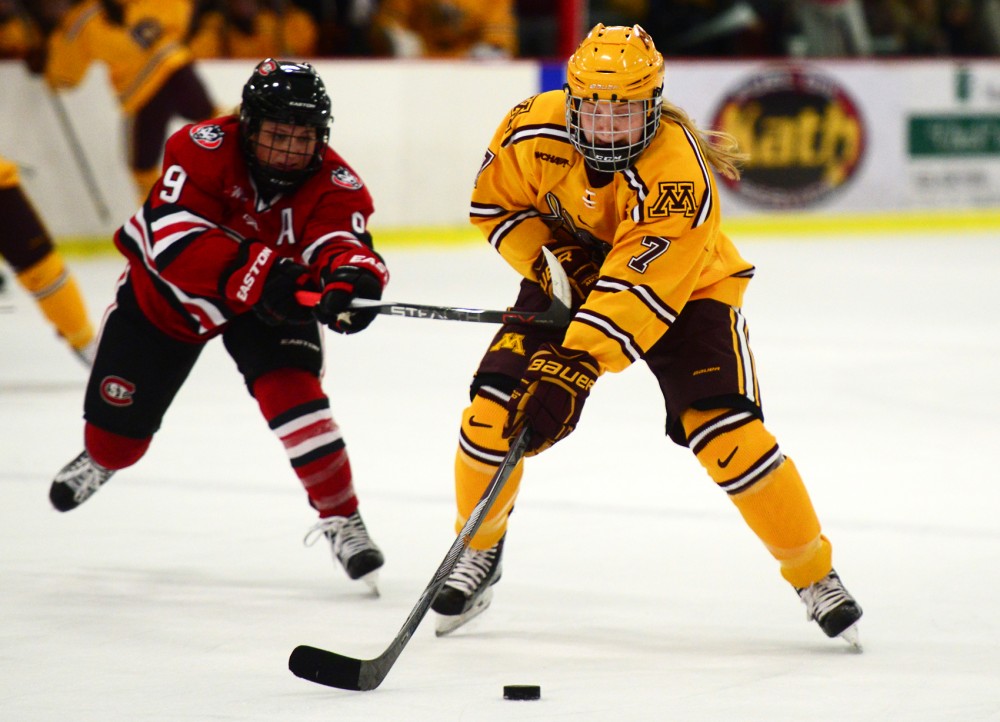 Taylor Williamson keeps the puck away from a St. Cloud State opponent at the the 2015 U.S. Hockey Hall of Fame Museum game at the Roseville Skating Center on Dec. 11, 2015.

Emily Polglaze
Taylor Williamson has played only 23 games for the Gophers, but the freshman forward has long been acquainted with Minnesota hockey.
She’s the third member of her family to skate for the Gophers, and she’s the first female after her father and grandfather also played at the University.
“I’m a third-generation member of the Gophers, which is pretty cool,” Williamson said. “It’s exciting to have a lot of family history here.”
Her grandfather, Murray Williamson, was recruited by Minnesota head coach John Mariucci back in 1955.
Murray Williamson ended up becoming an All-American in 1959, and after his playing career, he coached the United States National Team and U.S. Olympic team, winning a silver medal in Japan in 1972.
He was inducted into the United States Hockey Hall of Fame in 2005.
Taylor Williamson’s father, Dean, played for Minnesota from 1987 to 1990 and tallied 47 career points.
Taylor Williamson said her family’s connection to the Gophers gave her many athletes to look up to when she was younger. When she started to play closer attention to the women’s hockey team, she said she thought she could follow in her family’s footsteps.
“When I got older and started watching the women’s team, you have all these people like Winny Brodt, Natalie Darwitz, Krissy Wendell, Amanda Kessel. They’ve created such a history here,” she said. “It was the perfect fit for me.”
Taylor Williamson was able to play for the Gophers after putting together a strong high school career. As a senior captain for Edina High School, she was named the 2015 Minnesota Ms. Hockey, and the Hornets finished third in the Class 2A state tournament.
Her high school production didn’t immediately translate to college, but she’s made a bigger impact for No. 3 Gophers (22-3, 17-3 WCHA) in recent weeks.
“It’s more just with this second half [that] she’s getting more comfortable,” head coach Brad Frost said. “In particular, it takes Minnesota freshmen a good semester to really get acclimated, and I think she’s gaining more and more confidence.”
Taylor Williamson scored five points, with just one goal, in Minnesota’s first 12 games. But after scoring three points in the team’s series against Ohio State in January, she was named the WCHA rookie of the week.
Taylor Williamson has been moved around the lineup a bit recently due to injuries, but she has found little trouble in developing chemistry with her linemates.
“It’s lots of fun. She brings a lot of talent and hard work to the team,” sophomore forward Nina Rodgers said. “It’s only for a short time, but we’re clicking.”
Williamson said she’s started to settle in but that adjusting to college hockey has been a work in progress.
“It’s hard to say what my role will be, but I just want to keep getting better and better each year,” Taylor Williamson said. “Hopefully, I can be a big contributor for our team.”
Delete Image
Align Left
Align Center
Align Right
Align Left
Align Center
Delete Heading