Task force works with U athletics to educate youth

Tubby Smith and others spoke to fifth- and sixth-graders Tuesday. 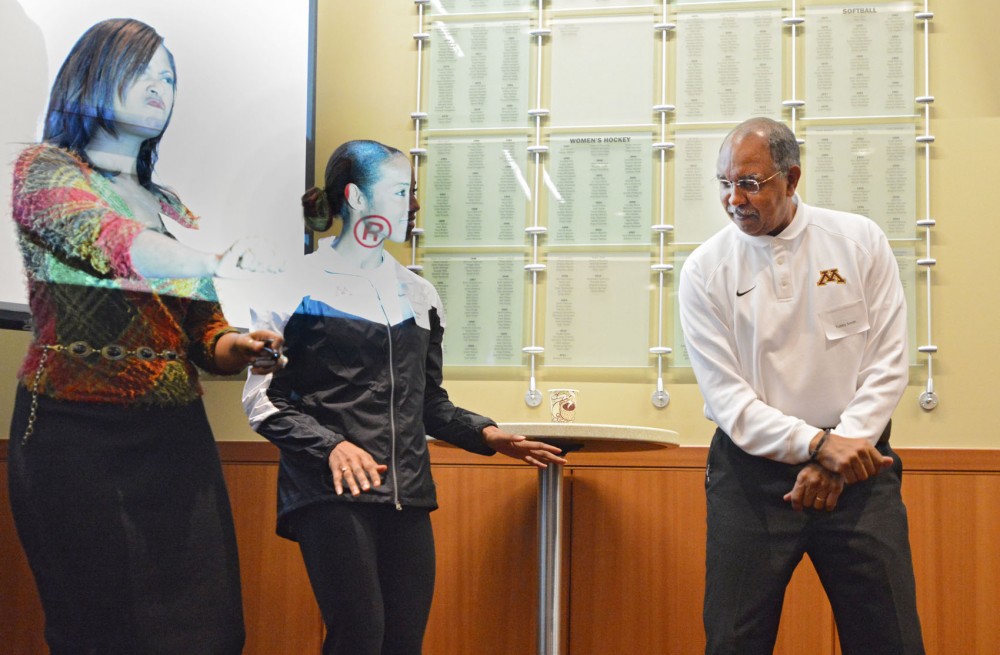 For fifth- and sixth-grade students, the University of Minnesota can be a strange place. The pace of life is faster, and the environment is vastly different from anything they know.

Some have never been to a college campus before and don’t realize the impact it could have on their lives.

He works with the cultural diversity task force within University athletics to provide youth the opportunity to see firsthand what a college campus is like.

“We were seeing so many kids who might not necessarily come to campus and understand what goes on here,” Lewis said. “We do understand that if they get a taste of this, it helps them understand a little bit about the value of education and what they can become.”

The group also works to address welfare issues for student-athletes and staff and to help promote graduation rates.

On Tuesday, the task force hosted its first-ever Breakfast with Champions fundraiser to engage the community in raising the funds that allow kids to come to campus.

Proceeds went to a task force fund that reimburses local schools and agencies that come to campus to meet student-athletes and tour athletics facilities, said Linda Roberts, director of special events and outreach for athletics, who was in charge of planning the event.

Tuesday provided an example of the work Lewis and Roberts do. About 300 fifth- and sixth-graders came to campus as part of the Native American Heritage Month celebration held each November. They had the chance to tour the Sports Pavilion and Williams Arena and meet student-athletes who represent various sports and ethnicities.

Lewis said the task force gives about 300 such tours each year, fulfilling roughly half the requests they receive.

The task force started after former athletics directors McKinley Boston and Joel Maturi created a “kitchen cabinet” in 2005. The initiative was designed to examine the overall welfare of black student-athletes and create diversity within the athletics department.

“My role was a product of their initiative,” Lewis said.

The cabinet of black leaders from the community provided feedback for hiring minority staff and for the development of welfare for student-athletes.

Lewis thought of the fundraiser over the summer. His idea was to host a breakfast each semester that featured key members of University athletics while raising awareness and financial support for the task force.

He said the breakfast shows how the University’s athletics department influences communities in St. Paul and Minneapolis.

The task force is composed of former athletes, faculty members and staff, along with business leaders and citizens in the community.

Each speaker Tuesday talked about what it means to be a champion and about the importance of diversity.

“Diversity has got to be a big part of just who we are here at the University of Minnesota,” Smith said. “Athletics is probably as critical as any place because we are the window, the front porch, to the University.”

Hollins said he thought the fundraiser was a good opportunity to talk about giving back to the community, especially as a public figure.

Benedict said it’s important for student-athletes to have the necessary academic resources to be successful during college.

“It’s not just about what they do on the court or on the field, but it’s about creating an experience for them that is well-rounded,” Benedict said.

Robyne Robinson, who served as the event’s emcee, said athletes need to become three-dimensional before leaving the University.

“So many times people see our athletes as people who just are out there to entertain them for a couple hours, and they’re on their way,” she said. “It is important for us to see our young people who come in here as works in progress that we are going to send back out to the broader community.”

The next fundraiser is scheduled for Jan. 8, Roberts said, and will likely feature athletics director Norwood Teague and volleyball head coach Hugh McCutcheon.