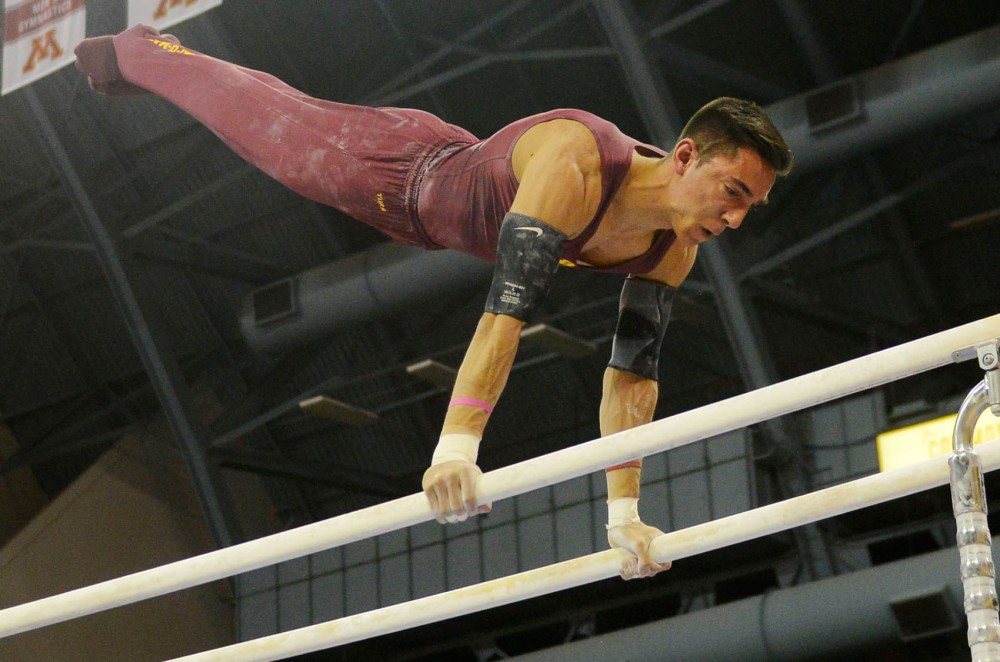 Senior Steve Jaciuk competes on the parallel bars against Iowa on March 7 at Sports Pavilion.

From finishing fifth in a six-team field during their first meet to upsetting the countryâÄôs No. 2 team in one of their latest competitions, the Gophers have come far this season. But after a subpar Big Ten championships performance two weeks ago, No. 6 Minnesota will look to rebound in the NCAA championships this Thursday through Saturday. âÄúWe had a couple small mishaps [in the Big Ten championships], but they realized what theyâÄôre capable of,âÄù head coach Mike Burns said. âÄúThey have the right mindset and are physically prepared for Thursday.âÄù The Gophers will compete in the first of the qualifying round Thursday with Stanford, Nebraska, California, Air Force and Penn State. The top three teams from both qualifying sessions will advance to the team finals Friday. Minnesota has competed against all five teams in its qualifier this season with mixed results. âÄúThere is a familiarity with the teams, but when youâÄôre out there, the other teams donâÄôt matter,âÄù Burns said. âÄúYou push the distractions aside and focus with the team.âÄù Last yearâÄôs team finished fourth in the NCAA qualifier and failed to advance. But this yearâÄôs team is different. âÄúWe were really close last year, but we have big change in personnel [this year],âÄù Burns said. âÄúItâÄôs fun to see this many new guys and how they handle [NCAAs].âÄù The big personnel change was drastic as the team went from being upperclassmen to underclassmen heavy this year. This yearâÄôs team consists of 10 true freshmen out of 19 gymnasts. But the freshmenâÄôs level of readiness is the big question lingering as Minnesota heads into the NCAA championships this weekend. The group of underclassmen stepped up and gained valuable experience before the postseason. âÄúThey are excited, not as much nervous, but anxious to do well,âÄù Jaciuk said. âÄúSome freshmen get nervous, and some step up, but these freshmen have really stepped up to the challenge.âÄù Senior Steve Jaciuk said some of the teamâÄôs earlier meets should mimic the atmosphere of NCAAs. With all the emotions surrounding the big meet, the underclassmen will need to put the lessons they learned from previous experiences âÄî like high-intensity meets âÄî to use. âÄúThey know they are ready. The work has been done, and they need to trust themselves now,âÄù Burns said. âÄúThey are more than capable and ready to feed off of each other.âÄù Burns said the underclassmen will look toward their senior leaders for guidance. âÄúThe freshmen look to the older guys for leadership by example,âÄù he said. âÄúThey have a certain level of calmness and excitement but to a point where it is manageable.âÄù The level of comfort and chemistry within the team is palpable âÄî after every event, the Gophers huddle up to keep those feelings going. âÄúThis is the closest team that IâÄôve been a part of. You can have talented teams like Illinois, but if you donâÄôt have chemistry and bond on some page, then ultimately, the team wonâÄôt come together,âÄù Jaciuk said.