Regular season slowly drawing to a close as Minnesota looks ahead 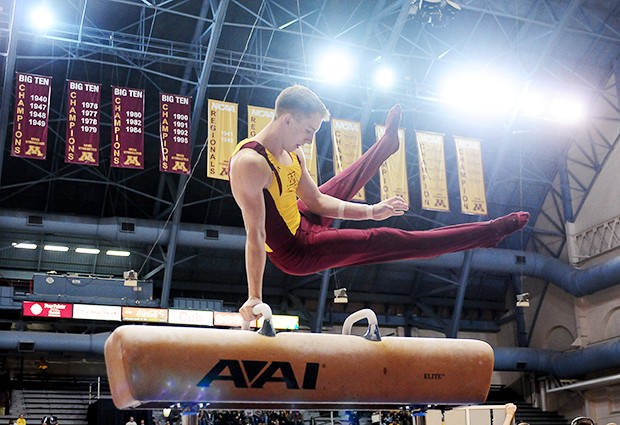 Senior Kit Beikmann competes on the pummel horse during the Gophers matchup with the top-2 teams in the country as No. 1 Stanford and No. 2 Oklahoma came to compete at the Sports Pavilion. Gophers coaches and gymnasts said it had an NCAA championship type atmosphere.

The Big Ten championships are just more than three weeks away, and the NCAA championships, hosted by the University of Minnesota gymnastics program, is only a short two weeks after that. But head coach Mike Burns âÄô gymnasts are almost ready for both. Burns was initially let down with some of his teamâÄôs performances on Saturday while hosting the nationâÄôs top two teams, but after watching tape yesterday, he knows nothing is major; these âÄúflukes,âÄù as he referred to them, are easily fixable âÄî starting this week. âÄú[The problems] were really miniscule,âÄù Burns said. âÄúWeâÄôve had some setbacks, but hey, itâÄôs sports.âÄù Burns and his gymnasts are practicing deduction reduction, or focusing on eliminating the small issues. Even now, the Gophers have a 100 percent hit percentage in 3 different events. While they are cleaning up, Burns also knows that between now and the end of the month, guys are going to work to be at full strength. As the regular season draws to a close, Burns sees his Minnesota gymnasts becoming healthier, gaining more endurance and performing at an even higher level. Senior captain Kit Beikmann is sure his team will finish at its highest level when it counts at the Big Tens and NCAAs. He has faith in everyone on the team, including himself. Beikmann won the Big Ten title on the pommel-horse his sophomore year and has kept his eye on a second title for some time now. âÄúThis being my last year, IâÄôm going to make sure I go down in the blades of glory. WeâÄôre going to finish strong; I have confidence,âÄù Beikmann said. The Gophers have won 21 Big Ten championships in their 106 year history, the last of which came in 1995. For Burns, who has never won a championship in his five years as head coach , the drought has been far too long. âÄúWe want to bring that title back home,âÄù Burns said. âÄúEvery year itâÄôs a no-brainer âÄî thatâÄôs what we want to do.âÄù For GophersâÄô gymnasts, a re-claimed title is more than a chance this year. Senior Eddie Campbell wants to be remembered by winning it, and he knows itâÄôs possible. âÄúThis is the first year IâÄôve seen a group of guys with potential for this year and years in the future,âÄù Campbell said. Also drawing nearer is the Big Dance for college gymnastics, the NCAA championships âÄî which is hosted by the University of Minnesota this year. Four years in the making has made for a hyped event in the University and surrounding Twin Cities community. âÄúWe think itâÄôs important for our menâÄôs gymnastics program, for our athletics program, for the University of Minnesota, and this community,âÄù Associate Athletic Director and championship manager Marc Ryan said . Ryan, his team and coach Burns are seeing the process picking up as the meet is just over a month away. âÄú[The process] just picks up intensity as you get closer and closer to the championship,âÄù Ryan said. The Gophers feel the same energy and want to keep it going. âÄúSome people sense the importance of [the end of the season] and they get a little nervous. These guys kind of seem to thrive on the pressure and intensity of it,âÄù Burns said. One thing, however, Minnesota gymnasts still need more of is confidence . Beikmann knows this is essential in any championship team. âÄúTeams that win are the teams that go out there and believe they can do it. This team is capable of it. This year we believe it,âÄù Beikmann said.