Minnesota scored eight goals in its first road sweep of the season. 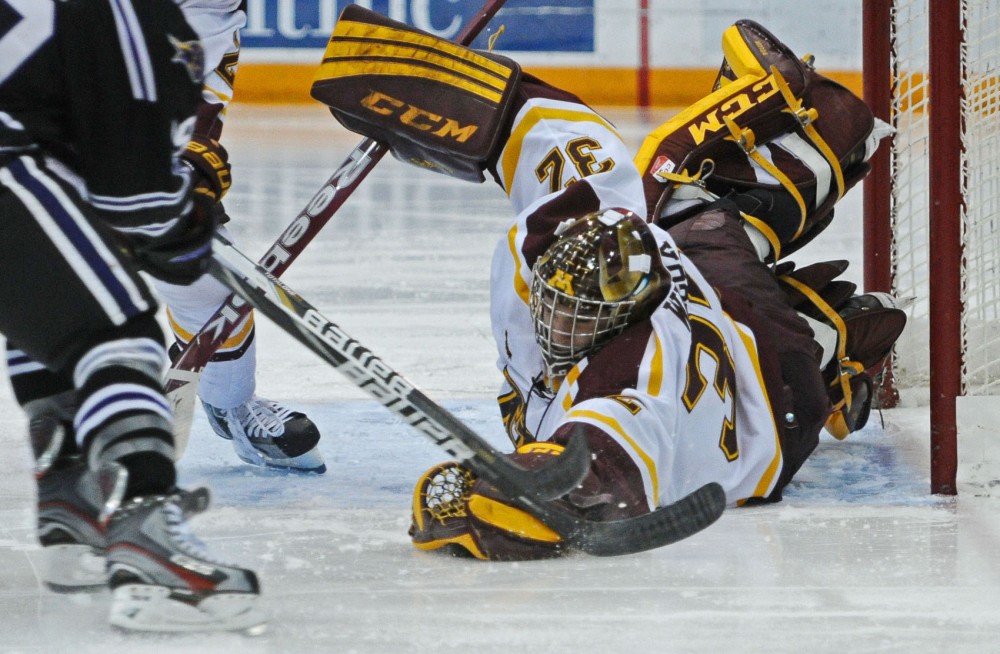 Minnesota goalie Adam Wilcox grabs the puck during a game against Minnesota State on Friday, Nov. 2, 2012, at Mariucci Arena.

A road series against a Hockey East Conference team meant that the No. 4 Gophers spent part of Thanksgiving on a plane.

Sweeping Vermont made their holiday travels worth it.

The Gophers’ offense came to life as they beat Vermont 5-1 on Friday and 3-1 on Saturday.

The second period was key for the Gophers (9-2-2, 4-2-2 WCHA) in both games. Minnesota scored three goals in the second frame Friday and two goals Saturday.

The Gophers aimed to bolster their 5-on-5 production and secondary scoring this weekend after a slow start this year. They improved both this weekend — only one of their eight goals came on the power play.

Tom Serratore scored for the second-straight weekend Saturday after Kyle Rau created a turnover in the offensive zone and got the puck to Ben Marshall at the point. Marshall drove the puck into the slot and slid it across the crease to Serratore.

Lucia said Saturday’s game was more difficult, which he expected.

“I thought that Vermont’s play was much more even throughout the game,” he said.

Minnesota conceded a goal in the third period but held on after dumping and chasing during the period’s final minutes. Nate Condon added an empty-net goal with 54 seconds left in the game.

“I thought we did a pretty good job the last four or five minutes,” Lucia said. He added that the team made a few mistakes, including taking a penalty that killed a Minnesota power play and led to Vermont scoring a 4-on-4 goal.

Adam Wilcox made 26 saves and picked up his eighth win of the season Saturday.

“Our team played great defensively. I thought it was one of our best weekends,” Wilcox told Fox Sports North. “I wanted to make sure that we had a sound game from the goal out.”

While 11 Gophers players picked up points Friday, a couple of those were special points for some freshmen.

Seth Ambroz got the Gophers on the board first Friday. Vermont tied it up before Rau gave Minnesota the 2-1 lead late in the period. Zach Budish fed Rau a pass from behind the net, and Rau scored from the doorstep, much like he’s done in many other goals during his college career.

“The guys stayed with it, and we made a lot of nice plays in the second period and scored some goals,” Lucia said Friday.

The Gophers turned one of his penalties into a positive. As his penalty time expired, Wilcox gave the puck to Nate Schmidt, who hit a streaking Bjugstad out of the box with a great outlet pass that led to a breakaway. Bjugstad did the rest, beating Hoffman glove-side for Minnesota’s fourth goal of the game.

Reilly’s goal came later in the period on a wrist shot that bounced its way past Hoffman.

“It’s been a while — it’s definitely good to get it,” Reilly told Fox Sports North after the game in reference to his first goal. “It was kind of a weak shot. It kind of snuck in there, I guess, but it’s good to get the first one out of the way.”

In the third period, the Gophers hunkered down, and neither team found the back of the net.

After allowing 12 shots in the first period, Minnesota only allowed 11 in the final two frames. Wilcox stopped 22 of those shots. Hoffman had 30 saves on 35 shots.

Haula gets the “A”

“I don’t think anybody competes harder than Erik in a game,” the coach said. “He works hard off the ice, he works hard on the ice, and I think it’s deserving that he wears the letter for us.”

Lucia said in a pre-game interview with Fox Sports North that he chose to wait until now to reward Haula because of an incident that he had off the ice over the summer.

Haula has six goals and 10 assists this season.