Pawlenty will not seek third term 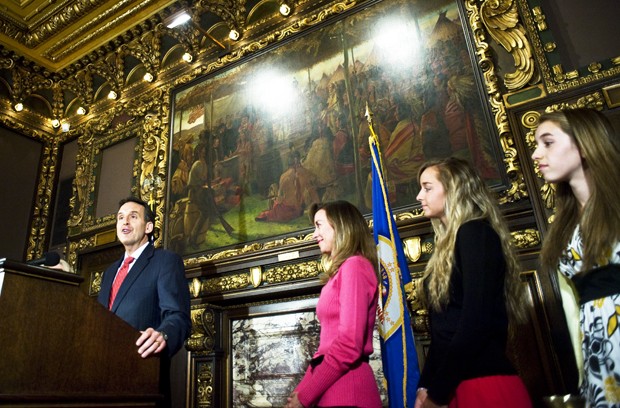 Minnesota Gov. Tim Pawlenty announced Tuesday that he will not be running for a third term in 2010 to, among other reasons, give future gubernatorial candidates âÄúample timeâÄù to make campaign plans. Joined by MinnesotaâÄôs First Lady Mary Pawlenty , Lt. Gov. Carol Molnau and his two daughters, Pawlenty said at a Tuesday press conference that he will continue to serve the state âÄúwith vigorâÄù for the remainder of his term. The announcement comes at a time of skepticism over the Republican governorâÄôs use of unallotment and the lack of compromise between himself and the DFL-controlled Legislature to resolve a multi-billion-dollar budget shortfall this session. The Legislature reacted bitterly over a previous budget dispute in 2003 and held the grudge against him in the 2008 session, Pawlenty said. University of Minnesota political science professor Kathryn Pearson said these tensions are what likely made the governor decide not to run in 2010. The governor is using unallotment to manually select the programs he will strike funding for in order to make up the $2.7 billion deficit in the stateâÄôs budget. Pawlenty and the Legislature are constitutionally mandated to balance the budget. âÄúUnallotment is going to be painful, and much of the pain will be inflicted around this time next year,âÄù Pearson said, âÄújust when the 2010 gubernatorial race is getting hot.âÄù Pawlenty said he is confident he would have won re-election in 2010, despite being in what Pawlenty called a left-leaning state. The timing of PawlentyâÄôs announcement coincides perfectly with a much-speculated possible presidential run, Pearson said. Pawlenty had been on the short list to be Sen. John McCainâÄôs running mate during the 2008 Presidential election. âÄúHe needs to work on raising publicity and money âÄ¦ and the timing made sense,âÄù Pearson said. In the case Pawlenty decides to run for President in 2012, he would likely form a political action committee to raise money and form an exploratory committee to consider running for President, Pearson said. He also would need to work on endorsements with key republicans in Iowa and New Hampshire, the sites of the first presidential primary caucuses, she said. If he is to run, expect to hear the announcement within six months, Pearson said. When asked if she is considering a run for governor, Mulnau said she is keeping her options open, but it is unlikely. Touching on another topic that has been generating a fair amount of public criticism, Pawlenty said the media is over-blowing his role in the Norm Colman , Al Franken Senate race debacle. He said he will not stall the process once the court makes its decision. âÄúIâÄôm going to do whatever the court says,âÄù Pawlenty said. When asked if he would be satisfied if his political career ended when he left office in early 2011, Pawlenty reiterated that he has not considered future political aspirations. âÄúIf [my term] ended today, IâÄôd be a grateful person,âÄù Pawlenty said. âÄúAnything beyond that would be gravy.âÄù