Looking to veer from previous presidents, the event will feature an outdoor speech, vegan chili and food trucks. 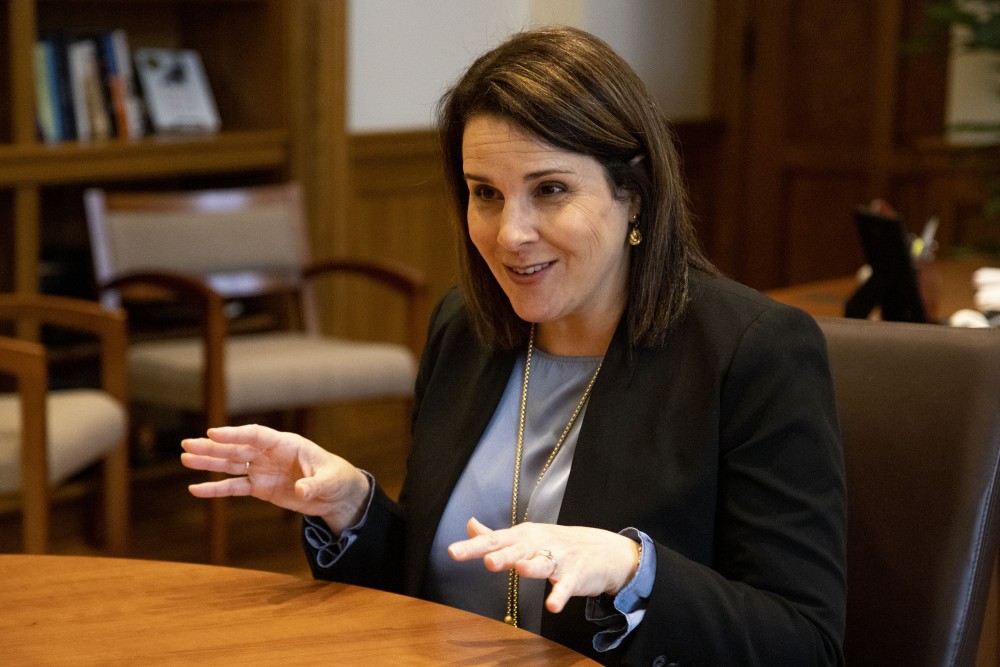 Joan Gabel will be inaugurated as the first female president of the University of Minnesota Friday after a week of events, culminating with a live streamed ceremony and speech on the steps of Northrop Auditorium.

Attempting to strike a different tone than previous presidents, Gabel said at the July regents retreat she hopes the event is more like eloping than a formal wedding.

“This is not something that one does every day,” Gabel said, acknowledging this is just the 17th time the University has inaugurated a new president in its 168-year history. “You want to respect tradition … but I personally want to feel comfortable. I want it to feel like me, because it is me who is doing it.”

While she has been the University’s president since July, the speech is another opportunity to lay out her vision for the University. Gabel said her goal is to minimize the pageantry and emphasize the community, hoping to achieve a party-like atmosphere. Former president Eric Kaler said the speech is important, and people often hearkened back to his speech, even as his days in office wound down.

“Given president Gabel’s approach toward governance, there is nothing more fitting than to have students highly involved in the inauguration process,” said Mina Kian, president of the Minnesota Student Association. Kian said MSA has met with the inauguration committee and came up with the hashtag #welcoMNGabel to be used during the event.

The University budgeted $250,000 for the festivities, but Gabel said she hopes it won’t cost that much.

“We want to be good stewards of the resources,” Gabel said. “These are expensive things to do and we wanted to do it in a way that respected the fact that we should spend as little as possible.”

The inauguration is more than a single day affair, as Gabel will attend various events throughout the week highlighting the University’s work. Wednesday will feature a panel of experts, University faculty and students discussing student mental health, a staple of Gabel’s administration. In the weeks following the inauguration, Gabel will visit each of the system campuses.

Inauguration Friday will start with a somewhat exclusive event in the Board of Regents boardroom where Gov. Tim Walz will present her with the mace, an ornamental staff that is a symbol of University leadership first used in 1961. While this part of the festivities is invite-only, it is being streamed live online.

The newly-minted president will then make her way to the heart of campus via the Scholars Walk to deliver her inaugural address. Gabel will be flanked by the University’s marching band, regents and mascots from each of the five system campuses.

Following the speech, also being streamed online, Gabel will join the campus community for a “party” on the mall featuring vegan chili, roasted corn and Minnesota apples, all free of charge. Should anyone have more expensive taste, there will be food trucks.

“Change is always good,” Kaler said. “She’s certainly going to do things differently than I did, and that’s exactly what she should do.”

Kaler said apart from his marriage and the birth of his children and grandchildren, inauguration was probably the most significant day of his life. He said it offers Gabel a chance to lay out her lasting vision for the University, which will likely follow her throughout her time here. Additionally, it allows the entire community to reflect on what it is a University should be, he said.

“If your research is stale, if your classroom is boring, if your community engagement is ineffective, you must reinvent yourself, or, frankly, step aside,” Kaler said in his 2011 address, a statement he said people brought up throughout his presidency.

Kaler said it is certainly a top 10 life day for any university president.

“For the president, him or herself, it’s a significant day,” Kaler said. “You hope for good weather and you hope for a good event.”