The unit has performed well thus far but faces its biggest challenge on Saturday. 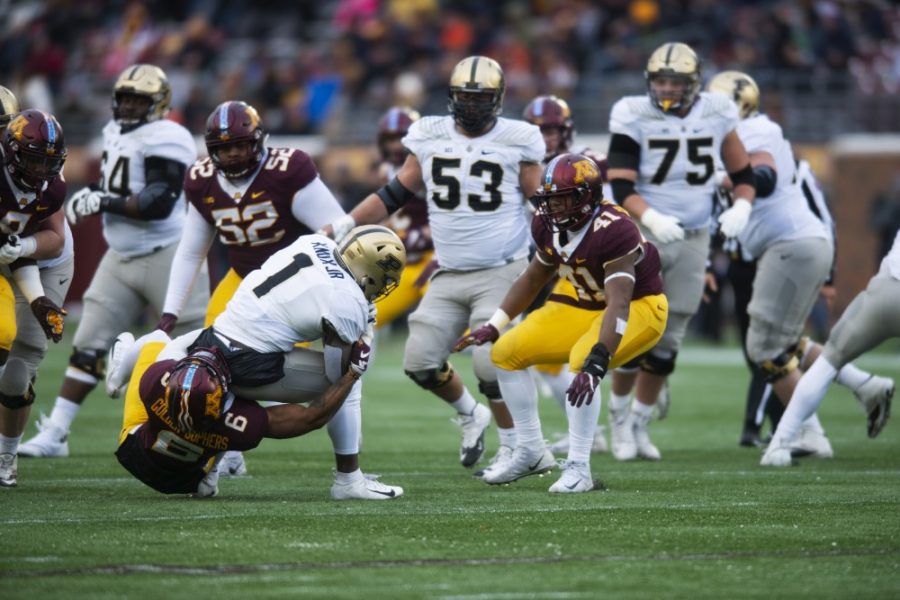 Freshman Esezi Otomewo tackles Purdue during the game on Saturday, Nov. 10, 2019 at TCF Bank Stadium. The Gophers beat the Boilermakers 41-10.

Arguably, the one position without a clear standout player was cornerback. Despite not receiving much recognition at the season’s onset, redshirt juniors Coney Durr, Kiondre Thomas and redshirt senior Chris Williamson have gotten off to strong starts through the first three games of 2019.

“We’ve came a long way, we’re still getting better,” Williamson said. “And that’s the thing: we haven’t played our best game yet. We’re heading in the right direction and that’s something that we’re proud of.”

Durr bounced back from a torn ACL in the last game of the 2016 season to play in all 13 games last season. Thomas appeared in 19 games with the team before 2019, including six starts his freshman year.

Williamson, a transfer from Florida, made just one start in his time with the Gators but played in 11 games in his first season with the Gophers last year. Despite seeing limited action in 2018, he has become an important part of the defense this season, having recorded 13 total tackles and returning an interception 43 yards for a touchdown against South Dakota State.

“He’s grown up a lot,” head coach P.J. Fleck said of Williamson. “Being able to play nickel, play corner, I think he’s become more physical. He’s become more confident. He’s invested in his body like I’ve never seen him do it before within the last year. When he truly decided to commit to it, he’s become a really good football player.”

So far, the trio of corners have turned in a trio of solid performances. Currently, Minnesota’s pass defense ranks 26th in the nation, limiting opponents to 185.3 yards per game. The secondary has yet to allow a receiver to go over 100 yards in any one game this year.

In this week’s Big Ten opener, the Gophers corners will face their biggest test of the year when they take on one of the best receivers in the country in Purdue’s Rondale Moore. Last year, as a true freshman, Moore caught 114 passes for 1,258 yards and 12 touchdowns en route to setting the program record for all-purpose yards in a season with 2,215 and becoming the first true freshman consensus All-American in conference history.

“Somehow, some way, he’s going to get his touches,” Fleck said of Moore. “You can’t just take him out of the game. He’s going to touch the football. You have to rally around him, you have to tackle really well. He’s strong.”

Through the first two games of 2019, it appeared Moore had picked up right where he left off, catching 24 passes for 344 yards and two scores. However, last week Purdue’s fifth-year quarterback Elijah Sindelar was sidelined against TCU with a concussion. In his absence, Moore was limited to just 25 receiving yards. Sindelar’s status for Saturday is unknown, but defensive coordinator Joe Rossi said the Boilermakers’ offense won’t change much whether their starter is Sindelar or redshirt freshman Jack Plummer.

“They are who they are,” Rossi said. “Regardless of who the quarterback is, we’re expecting it to be a consistent attack, and we have to limit their explosive playmakers.”

No matter who is throwing passes, it is undeniable that Moore is one of the most talented receivers in college football, and he should prove a tough cover for this group of emerging Minnesota cornerbacks. However, the unit is accustomed to a challenge, as it faces talented receivers such as Tyler Johnson and Rashod Bateman in practice.

On Saturday, Williamson, Durr and Thomas will attempt to contain Moore and the rest of Purdue’s receiving corps when the Gophers travel to West Lafayette, Indiana to battle the Boliermakers.