A few tributes to the retired head coach took place at Saturday’s game. 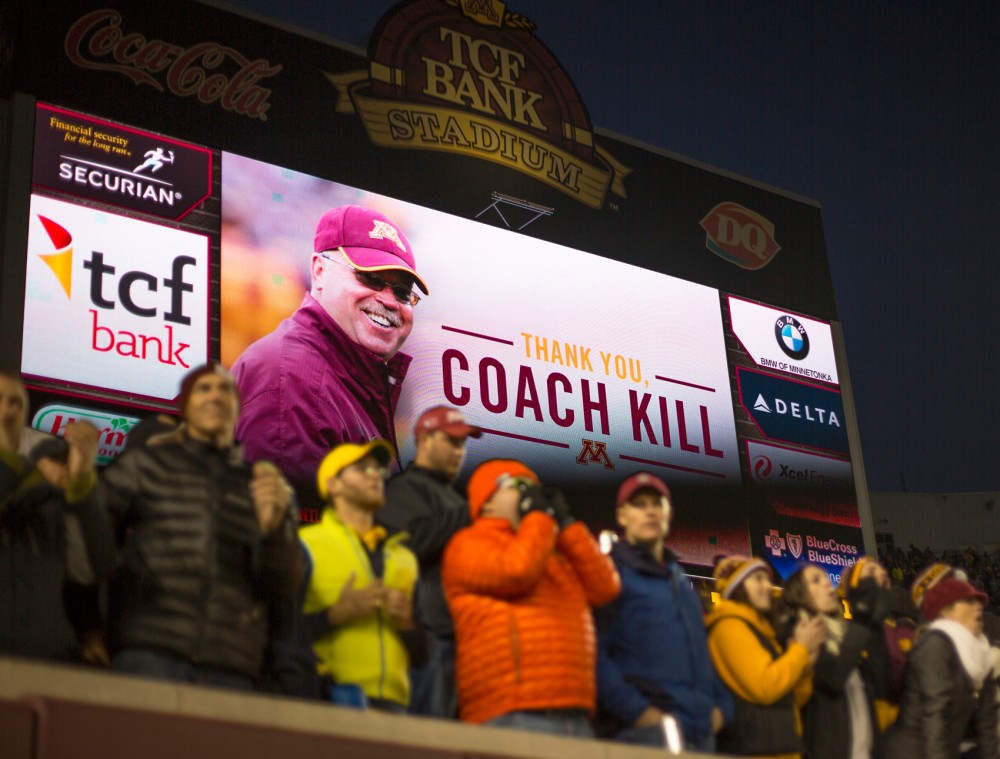 A tribute for recently retired Head Coach, Jerry Kill was displayed at TCF Bank Stadium during Saturday's game. Fans in a crowd of 50,709 chanted Jerry's name in his honor. Tracy Claeys, Minnesota Interim Head Coach, coached his first game Saturday where the Gophers were defeated by the Wolverines 29-26.

Ben Gotz
Minutes after a failed quarterback sneak capped a Minnesota loss to No. 15 Michigan on Saturday, redshirt junior Mitch Leidner found a message on his phone.
It was from Jerry Kill.
“He just left me a voicemail, saying call me when things get a little bit calmer,” Leidner said on Saturday.
Kill watched the game from his home after announcing his retirement due to heath concerns on Wednesday, but his presence still loomed around TCF Bank Stadium.
The final game plan he helped put together worked for most of the night as the Gophers outgained the Wolverines and led for most of the fourth quarter. Michigan stopped Minnesota on its final drive, though, and the team wasn’t able to come away with a victory on an emotional night for the team.
“Everybody is disappointed,” Minnesota interim head coach Tracy Claeys said Saturday. “To come that close and the effort they put forth, look, you are talking about 18- to 22-year-old kids that just lost one of the most influential people in their life.”
Several Gophers players played with visible emotions during the game, including Leidner, who pounded his fist into the turf multiple times after being tackled on the team’s first quarter field goal drive.
Leidner also got the game off to an emotional start, carrying a flag bearing the word “Jerrysota” around the field to excite the crowd before the opening kickoff.
“I was honored to be able to do that tonight,” Leidner said Saturday. “They asked me earlier in the week if I wanted to do it, and I said, ‘Hell yeah, I want to do that.’ I wanted to do that so badly and to get an opportunity to do that tonight for coach Kill. [It’s] something I’ll never forget.”
The flag was the first in a number of public recognitions of Kill during the game, honoring his contributions to the program since being hired after the 2010 season.
The scoreboard played a tribute video to Kill in the first quarter, and the Minnesota marching band spelled out “Jerry” at halftime.
The crowd also chanted “Jerry” after many of the Gophers’ big plays, including when junior wide receiver Drew Wolitarsky appeared to catch a game-winning touchdown pass with 19 seconds remaining in the fourth quarter.
But Wolitarsky was ruled down at the 1-yard line, a passing play fell incomplete and Leidner’s sneak was stopped just in front of the goal line. Michigan took back the Little Brown Jug, and the Gophers walked off the field in defeat.
Leidner had Kill’s voicemail waiting for him, after talking to his former head coach Friday before the game.
In between the phone calls, the Gophers did everything they could to honor Kill’s time at Minnesota, except win their first game after his retirement.
“[We] definitely wanted to come out and get this win for him because I know he was watching,” redshirt senior linebacker De’Vondre Campbell said Saturday. “That’s something that’s going to be in the back of our minds, how we weren’t able to pull it out when it really mattered.”
Delete Image
Align Left
Align Center
Align Right
Align Left
Align Center
Delete Heading