A demonstration on Monday rallied against the arrests of several students at last week’s Morrill Hall sit-in. 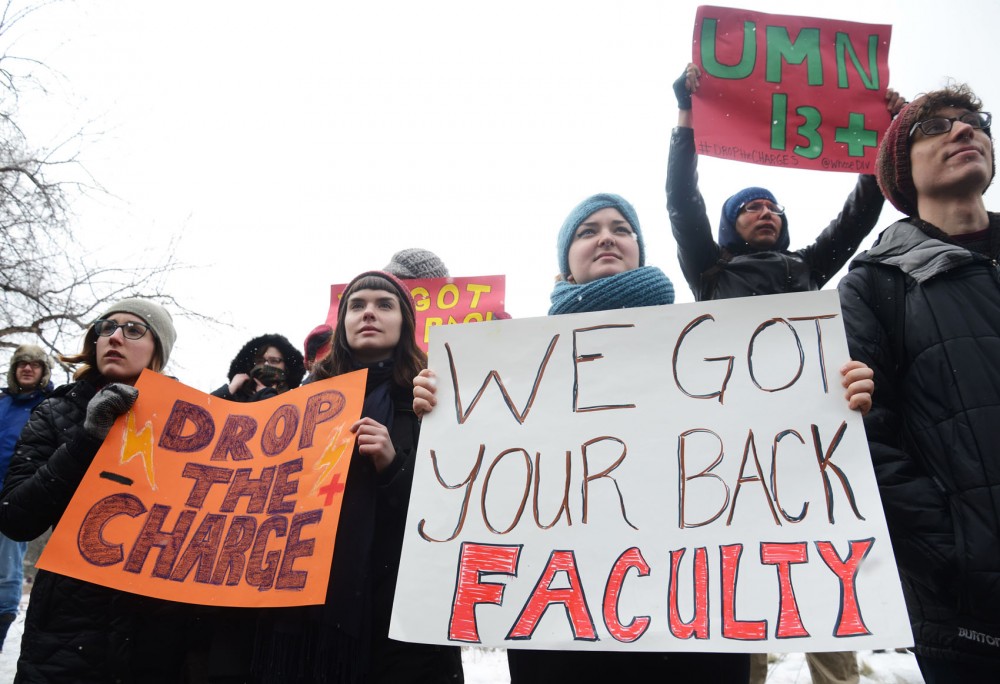 About 150 people gathered in front of Morrill Hall Monday to protest the arrest of 13 University of Minnesota students and community members last week.

University faculty members and students, among others, rallied in front of the administrative building in support of a list of diversity-related demands made by the campus group Whose Diversity?.

Faculty members also requested that the University not discipline or pursue criminal charges against those arrested.

The protesters were told to leave Morrill Hall by 6 p.m. or they would be arrested. Three demonstrators chose to leave, but the 13 remaining were arrested for trespassing.

On Monday, groups including Faculty in Support of Whose Diversity?, Students for a Democratic Society and the Million Artist Movement held signs and banners with phrases of solidarity for the group arrested last week and Whose Diversity?’s demands.

“We want people to see that their demands have value,” said EdÃ©n Torres, chair of the Department of Chicano and Latino Studies.

Last spring, Whose Diversity? made a list of demands for administrators that includes increasing staff and faculty in the Department of Chicano and Latino Studies, providing a gender-neutral bathroom in each University building and removing racial descriptions from crime alerts.

Faculty spoke at the demonstration Monday urging administrators not to file student conduct violations or pursue criminal charges against the protesters.

“I believe in the students’ right to have their voices heard. They were perfectly peaceful; there is no reason to press charges,” Torres said.

Faculty members also asked administrators to consider Whose Diversity?’s requests to improve diversity on the campus and act on the group’s demands.

“This is not a radical movement, this is simply a movement to enhance the racial climate on campus, said Zenzele Isoke, an associate professor in the Department of Gender, Women, and Sexuality Studies.

Morrill Hall was locked down during the day on Monday and no one was allowed in unless they had business in the building, said Tim Busse, spokesman for University Services.

The University released a statement Monday afternoon in response to the demonstration.

“We share a deep commitment to increasing faculty, staff and student diversity and to creating a community that welcomes and embraces all experiences and perspectives,” the statement said.

The statement also said the College of Liberal Arts will hire four new tenured and tenure track positions, including one position in the Department of Chicano and Latino Studies.

The 13 protesters arrested in the initial sit-in of Kaler’s office are scheduled to appear in court next week.