From the Alamo to lingerie, designers discuss their lines

Apparel design students discuss inspiration and gearing up for their senior show. 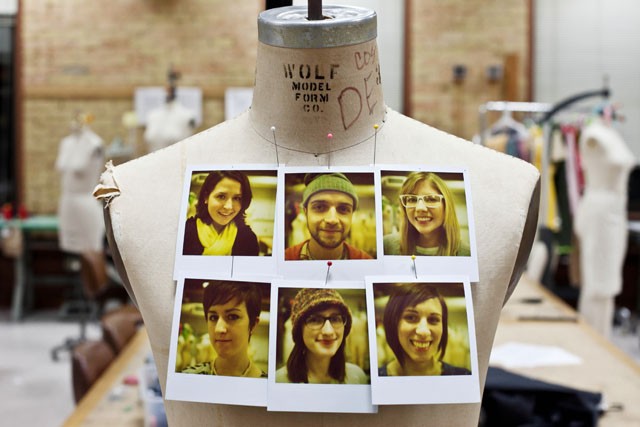 They made it through the portfolio review their first year, kept up with classes and honed their skills.

Now, the 2011 senior design class is ready to present its work. The 18 students will have their lines showcased Saturday at Distortion, the 43rd Annual Senior Fashion Show.

The looks come from different inspirations, for men and women and even a childrenâÄôs outfit.

Six designers sat down with the Minnesota Daily to share their vision of their line and what inspires them.

ItâÄôs a sort of casual modern menswear line. It was inspired by my trip to the Scottish highlands last fall and also just what I have been seeing in menswear âÄ¦ Basically for the young, urban man interested in style.

IâÄôve kind of always been interested in menswear; half of the time I am wearing menâÄôs clothing âÄ¦ There is definitely a challenge to creating something new without changing the overall silhouette, because guys donâÄôt want to look clownish or have frills or anything. ItâÄôs just all in the details, and I think thatâÄôs really interesting about it.

I feel like it comes and goes and when you are growing up youâÄôre like, âÄúOh this is just a fantasy.âÄù I think when it really hit me that this is what I wanted to go to school for, I was able to take two sewing classes in high school, and I sat there in study hall and work release periods sewing and I realized that if I could do anything all day that would be it.

He definitely could use a little styling. Probably some fitted chinos, a nice coat and some of those cool bucks âÄî those suede shoes probably. His headâÄôs too big, it would never work. He just needs to mix it up, heâÄôs too sporty.

Mine is focused more on the young professional man, 25 to 35, just starting out in his career path. ItâÄôs partially inspired by a trip I took to Europe at the end of August and just seeing how clothes fit men differently over there. I tried to put some of the really bright colors in there and set them in to a more neutral gray base so itâÄôs still something that a guy could wear to work, that he wouldnâÄôt feel overly flamboyant wearing, but still brings in that color sense and the bright colors that I really like.

It kind of comes from everywhere, but for me it does generally overall start with color inspiration. To a certain extent, I do look at trends and things like that, but I always want to make sure that it still fits with my aesthetic within that. Honestly, it just comes from observing people I see on the street.

I initially came into the apparel program considering doing costume design, and if you are going to do costume design you will inevitably have to design costumes for men in addition to women. ItâÄôs a really fun challenge because the trend cycle for men is different than it is for women because it is a lot slower, and itâÄôs more in the details that are evolving as opposed to complete silhouettes.

Generally, my interests are more androgynous menswear, but I decided to go with something kind of different for me, which is womenâÄôs ready-to-wear. It was inspired by mostly Native American culture, but I also had an internship in Africa last summer, and some of that came through as my inspirations.

I guess in high school I just liked it. I took a home [economics] class and a sewing class and was good at it so I followed through.

If you could dress Goldy in anything, what would it be?

Zubaz. A friend of mine has zebra-striped purple Zubaz, and give them a drop crotch. No, nothing on top. Goldy should go shirtless.

My line is very structural, all black. I just had this image of people after the apocalypse. You still have to go to work and go about your daily life. Every day is sort of a battle, so my clothing is really structural, and I want people who wear it to feel strong and aggressive so that is what I tried to do with it for shape and structure.

IâÄôm trying to express a mood or a feeling, and the wearer should feel a certain way. I more think of that. I look at a lot of images, current fashion trends, analyze that and go from there.

When/why did you did you decided you wanted to design clothes?

I have been sewing for a very long time and I have always had a hard time finding what exactly I was looking for in clothing, so that really drove me to create my own pieces, and so I just thought maybe other people out there would share my perspective. I also make purses and handbags that I sell in a boutique in Uptown âÄî that was kind of how I got my start.

My line is a line of lingerie that was inspired by a trip I took to San Antonio. So, specifically, it is inspired by the Alamo and the dichotomy of a place. The idea is female sexuality is this really pure thing that most of the time is a battlefield and gets destroyed. So itâÄôs just really pretty lingerie thatâÄôs not supposed to be overly sexual, but it can be.

IâÄôm inspired by making really pretty things. I am most inspired by a way a person will feel when they are wearing things I have made. I want them to feel like the best version of themselves.

I wanted to work with lingerie because the amount of technical fit you have to involve is a lot more complicated. You are working directly against the confines of the body. It needs to be able to stretch, it needs to be able to move. You need to be able to take it off [in] probably three seconds otherwise it is coming off anyway.

Why did you decide you wanted to design clothes?

I actually spent my first year of college as an art major at a different school. Going into fashion has always been my passion. When I was 10, my mom had a subscription to People magazine, and I remember looking at the Oscar issue and getting obsessed. I just love the tactile âÄî the feeling of cloth between my fingers and the way I can manipulate that.

My line is inspired by women who are on the move, so itâÄôs a lot of clothing that is in a way activewear but itâÄôs a little bit more fashionable and geared towards everyday life. ItâÄôs stuff you can wear to work, ride your bike to work, go out for drinks after work. ItâÄôs extremely versatile, and you have the ability to basically do anything in it.

I find a lot of inspiration in everyday life. A lot of it I find in nature, being outside, doing things I love to do outside. Anything as small as taking a different way home from work. Everything new that you see changes your perspective, so as many things as you can expose yourself to, the better.

I decided to do womenâÄôs activewear because I think that it is a market that hasnâÄôt really been tapped yet. There is a need for clothing like this, and no one has really fulfilled it. What I tried to do [was] meld the two and make something that is extremely purposeful and you can do all the same things you have to do in but you can also look cute and fashionable and have fun wearing it around on a daily basis.

I decided when I was a senior in high school. The summer before my senior year I went to design camp at the U. One of my high school teachers heard about it and told me I had to go so I went. It was really cool to be exposed to that field and some of the faculty here and to just know that this is a possibility âÄî this is a path you can take.

IâÄôd like to see him dressed as a ballerina. I donâÄôt know why, I pictured a tutu and I think that would look really great.