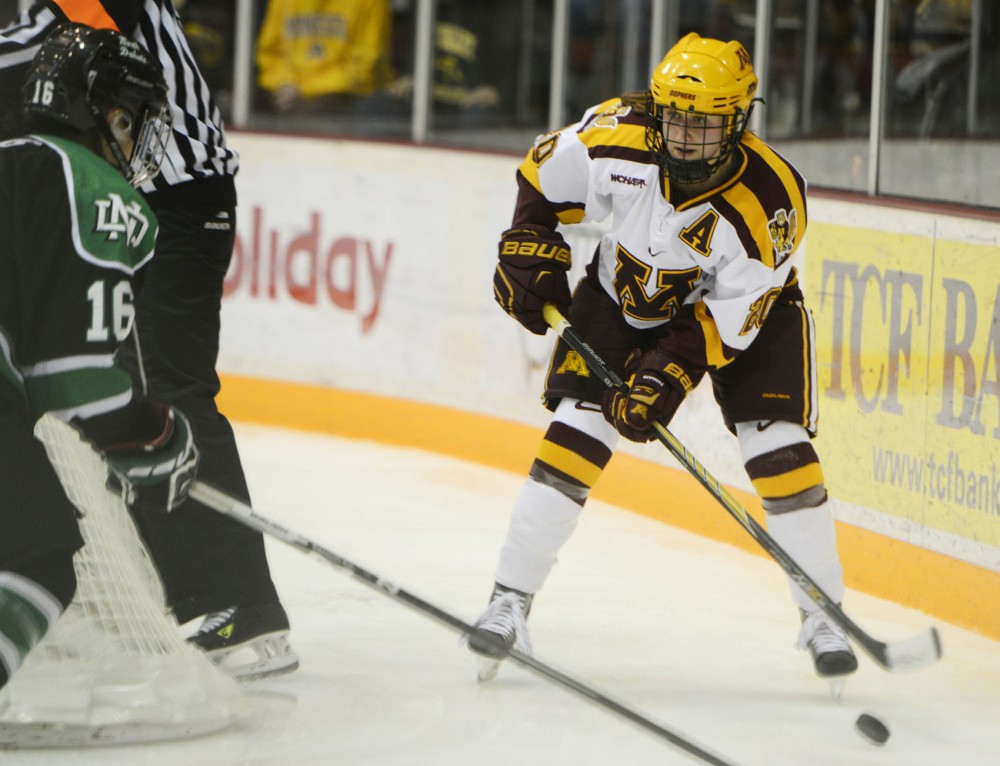 Senior Meghan Lorence carries the puck at the Gopher Women's Hockey game against North Dakota at the Ridder Arena on Friday.

After Minnesota had two weeks off and fell to the No. 2 ranking, senior Meghan Lorence said her team needed to make a statement when it traveled to play Ohio State.

Naturally, she came out Saturday and recorded her first collegiate hat trick, which helped the Gophers to a 5-3 victory on Saturday, less than 24 hours after a 4-2 victory on Friday.

“We had to prove ourselves this weekend,” Lorence said. “The disappointing [Bemidji State series] was still in our minds, so we had to make a statement.”

In the Bemidji State series, the Gophers were desperately looking for secondary scoring options to complement the team’s scoring leaders.

Minnesota didn’t have to look far this weekend against Ohio State, as none of the team’s nine goals came from its two top scorers.

“It’s just so big for [other] players to gain confidence,” head coach Brad Frost said. “We just need to get those players going, and it was huge for our success this weekend.”

Senior Rachael Bona and sophomore Kate Schipper both put together multi-point efforts to carry the team Friday night, but Lorence stole the weekend’s headlines with her hat trick on Saturday.

Lorence completed her hat trick in a unique fashion, scoring her third goal while Ohio State was on the power play.

“Having a shorthanded goal this weekend was huge,” Lorence said. “It was a turning point in the game and really sealed the deal and allowed us to come out with six points.”

After Ohio State battled back to tie Saturday’s game at 2-2 in the second period, senior Rachel Ramsey scored a goal with 15 seconds left in the period to give the Gophers the lead and the momentum.

“[Ramsey’s] goal was as big of a goal we had all weekend,” Frost said. “Any time you can score late in the period, it is kind of a back-breaker for the other team.”

Minnesota dealt out plenty of back-breaking goals over the weekend.

Ohio State fought back in the second period on Friday after cutting the lead to 3-2. However, 38 seconds later, Bona found the back of the net, crushing the Buckeyes’ attempt at a comeback.

“We got a little pissed off when they scored those two goals,” Schipper said. “We definitely wanted to get
momentum back and not let the game get away from us.”

The Gophers had first-period leads in both games, something that wasn’t always the case earlier this season.

“Scoring first is important, especially on the road against a team like Ohio State that gets better every time we play them,” Bona said.

Between establishing secondary scoring options and getting off to fast starts, everything seemed to come together this weekend for a team that wanted to make a statement.

“We just came into [the weekend] wanting to show people that we can play better than we did against Bemidji,” Schipper said. “It was definitely a statement weekend.”