Slow motion videos of Gophers lets museum attendees see how they match up. 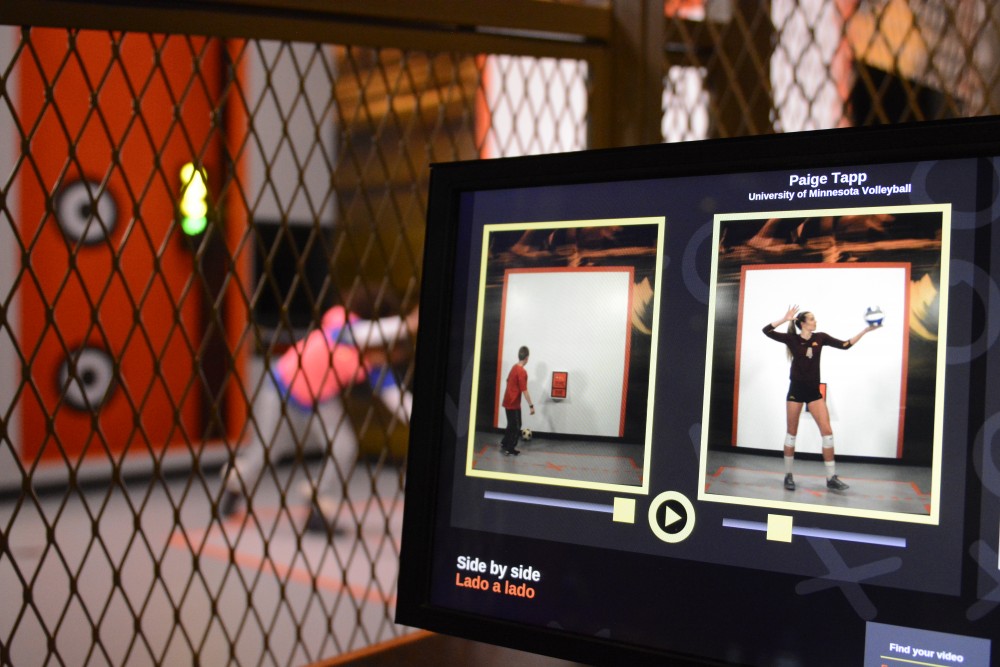 The Sportsology exhibit at the Science Museum of Minnesota in St. Paul lets kids compare a video of their sports skills side by side with professional athletes like U of M volleyball player Paige Tapp on Friday, Jan. 27, 2017.

As one kid raced a Tyrannosaurus rex, another recorded herself passing a volleyball. Across the room, someone took a running start, hopping toward a basketball backboard seven feet in the air.

As part of a sports-focused, interactive exhibit at the Science Museum of Minnesota in St. Paul, Sportsology features University of Minnesota athletes and is designed to teach the science of sports.

The exhibit — co-presented by HealthPartners and Tria — opened last month and contains about nine interactive stations.

Kim Ramsden, a museum spokeswoman, said the idea for the exhibit, which will run for a few years, came out of the general public’s interest and passion for sports.

“We can learn from how our bodies do sports actions,” Ramsden said. “We’re putting the science into activity.”

These activities include a station to measure vertical jumps, and a short track where attendees can race against Minnesota athletes, a T-rex or the Twins’ mascot, T.C. Bear.

Another highlight of the exhibit is a slow-motion lab that records movements that can be replayed and compared to collegiate or professional athletes such as Twins player Joe Mauer, Lynx player Lindsay Whalen and the Vikings’ Adam Thielen.

“It really kind of focuses on the exact science of all sorts of different sports,” Demuse said. “In the slow-motion exhibit, you can really … focus in on the small details and what really happens when you’re doing a cartwheel.”

The Minnesota Science Museum first built a version of Sportsology for the Perot Museum of Nature and Science in Dallas in 2012.

After seeing its success in Dallas, Ramsden said the museum decided to install Sportsology on its third floor, where the exhibits change periodically for new material.

“We saw opportunities to be able to localize it,” Ramsden said, adding that the museum wanted to incorporate Minnesota athletes from the beginning planning stages.

The museum typically sees about 1,000 people per day, which doubles on the weekend, she said. Through the course of the exhibit, the museum has had more than 30,000 attendees.

She said it’s valuable for children to learn about the way the body works when playing a sport.

“That presents a lot of the latest information about what we know [about[ how to prevent and treat concussions,” Ramsden said.

Andy Claybaugh and his son, Kyle, 13, said they heard about Sportsology from advertisements and liked the interactive aspect of the exhibit.

Erin Klug, a Minneapolis resident, said she brought her kids to the exhibit and likes that all of the stations are hands-on and incorporate the whole body.

“For kids who are interested in athletics, they can learn some of the science,” Klug said.

Kelley Nelson, St. Paul, brought her sons Tyler, 12, and Zach, 9, who both play multiple sports and said they liked that there various aspects of the exhibit.

“The way this is done is just phenomenal,” Kelley Nelson said.