Since 2003, the group has sought to regain club standing. 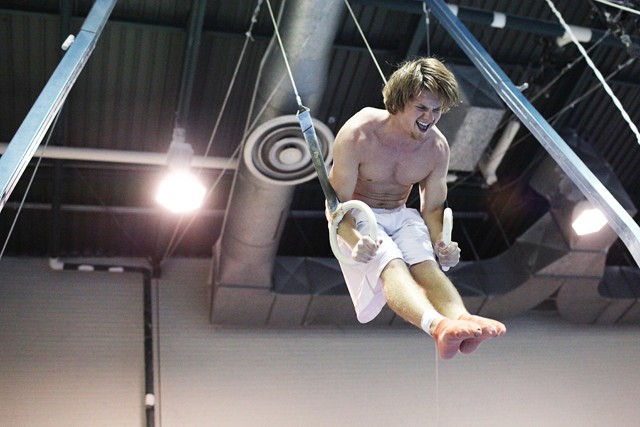 When he looked out at 60 gymnasts practicing together in Peik Gymnasium on Monday night, Brian Girard saw six years of hard work paying off.
After half a decade of uncertainty, the number of people in the University of Minnesota Gymnastics Club has doubled in the past year.
“I feel like the team is finally becoming what it once was,” said Girard, the president of the team.
At the end of 2003, the team lost its standing as a club sport and became a student group. Girard and officer Missy Preston have been working to re-establish that status ever since.
“The team couldn’t meet club team requirements, so they decided they would be better off as a student group,” Girard said. With the assistance of his teammates, Girard applied to be reinstated as an official club team and regain funding and the use of gym facilities in 2008, but was denied.
Sport club applications are first evaluated by the Sport Clubs Advisory Council, which is made up of eight students who are, or have been, club team officers. Their main purpose is to determine whether the necessary resources are available for the team, Sport Club Program Director  Jessica Novotny said.
If the application is approved by the council it must pass through other officials before the director of recreational sports signs off on it — a process that takes a year to complete.
The University is “maxed out” on facilities and money, Novotny said. “We haven’t admitted a new group in three years.”
Despite the grim outlook, Girard said he plans on reapplying this fall, but he knows that becoming an official club sport “wouldn’t change the way the club functioned.”
From 2004 to 2008, the group of gymnasts was nothing more than five to 10 students working out together without any competitions or guidance. In 2008, the team began to try and recreate their former glory.
They spoke with the coaches of the nationally competitive men’s and women’s gymnastics teams at the University to try to get practice space and were able to begin practicing in the men’s gymnastics gym in Cooke Hall.
“This was a good first step, but we really needed the women’s gym in order to work on balance beam and uneven bars exercises. The men’s gym doesn’t have those,” Girard said.
For this reason, when Girard became president he immediately re-established connections with the women’s gym.
“They saw we were a re-organized club, so they were willing to let us use the practice space,” Girard said.
This led to the team’s first official competition in March of 2008.
Girard has high hopes for even more improvements this year. The team is planning a full schedule of practices and competitions, hosting a competition themselves and getting a team coach in October.
“We used to be under the radar,” Preston said, “but now we know what to do.”