Around campus, more are door-knocking, phone-banking and working on campaigns. 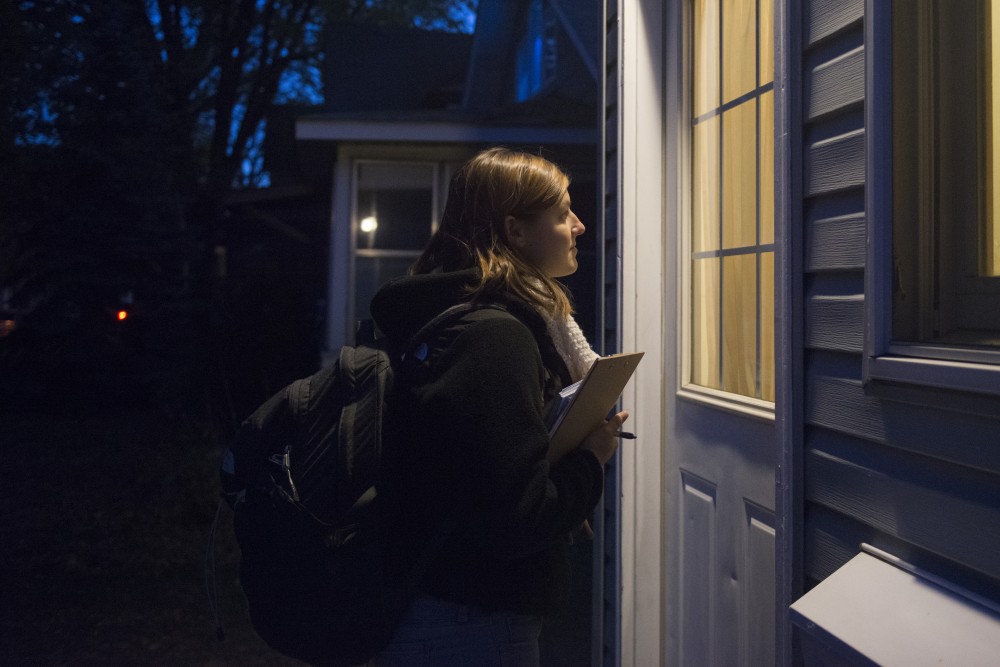 Campus Organizer with the DFL Youth-Coordinated Campaign, Michaela Muza, waits for a resident of a Como home to answer the door on Tuesday, Oct. 23 during a door knocking session.

Ahead of Tuesday’s midterm elections, organizations around the University of Minnesota have tracked an uptick in student political involvement.

Enthusiasm for voting and political involvement has increased, evidenced by door knocking numbers, voter registration and conversations between political groups and students around campus. Republican, Democratic and nonpartisan student groups have made efforts to mobilize the student voting base this election cycle.

College Republicans at the University estimate they’ve knocked on about 12,000 doors since the start of the fall semester and have made about 25,000 calls on behalf of their endorsed candidates.

This data is pooled together from individual College Republicans’ accounts on two different door-knocking apps and a phone-banking app, including members of the club who also work with groups like the Congressional Leadership Fund and House Republican Campaign Committee.

Data from College Republicans indicated meeting attendance is up around 50 percent this semester from spring 2018, with an average of 50 members per meeting.

“The midterms are like a blown-up version of the presidential election,” Olson said.

College Democrats at the University of Minnesota said their student base has made around 6,000 phone calls, had about 2,100 conversations with people on behalf of their candidates and has gotten over 1,300 students to pledge to vote.

This includes numbers pooled from College Democrats, Students for Ilhan Omar and the DFL Youth-Coordinated Campaign. It does not include numbers from individual students working for campaigns or organizations.

“Normally it’s like pulling teeth to get people to knock on doors, but in the last couple of weeks especially, we’ve seen a lot of engagement,” said Michaela Muza, campus organizer with the DFL Youth-Coordinated Campaign.

These political student groups invite their candidates to meetings to boost interest.

College Democrats have had candidates like Angie Craig and Ilhan Omar attend their meetings.

Nonpartisan student groups like the Minnesota Student Association are also looking to increase student engagement. In October, MSA held their annual Voterpalooza event to promote voter turnout, where 312 students were registered. In 2017, that number was 163.

“One thing that I’ve especially noticed this year is that students are much more willing and much more excited to talk to you. When you had people flyers and when you try to get people to register to vote, they’re not always super receptive,” said Christina Laridaen, MSA Government and Legislative affairs advocacy coordinator.

Student leaders hope this momentum continues after the election.

“Once people are elected, we need to be holding them accountable,” Muza said. “We’re hoping to keep student engagement high.”