Justin Karstadt was named Most Outstanding Gymnast in Saturday’s meet. 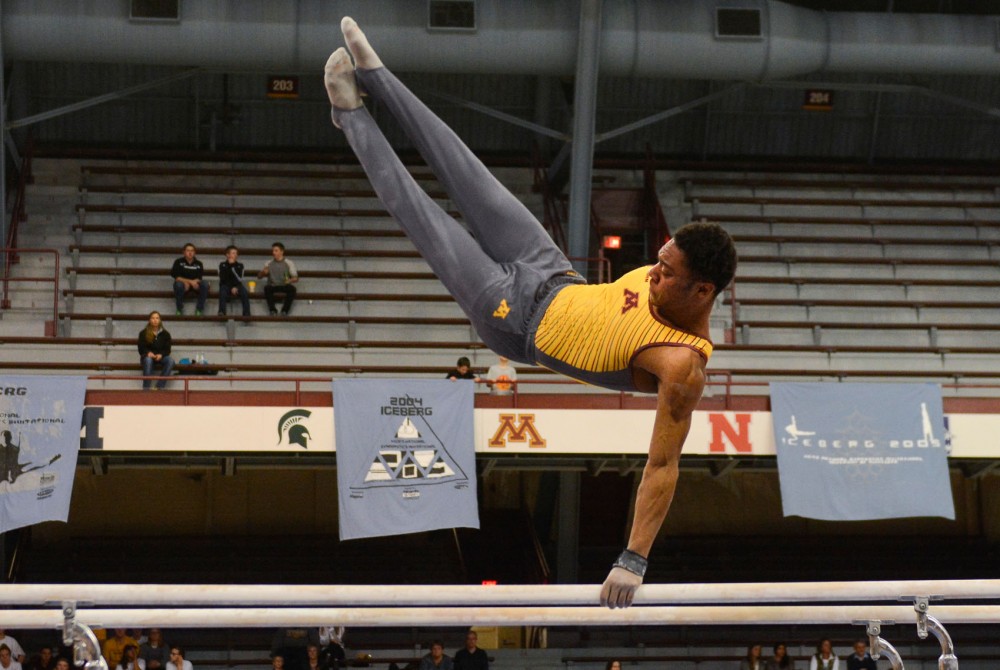 Paul Montague performs on the parallel bars on Saturday at Sports Pavilion.

Justin Karstadt was nearly perfect in the Gophers’ defeat of the Huskers Saturday.

Karstadt stuck three dismounts in his all-around performance, which earned him Most Outstanding Gymnast of the meet in Minnesota’s 400.750-396.700 victory over Nebraska at the Sports Pavilion.

“This is the first time [Karstadt] has done the all-around since the Windy City,” said head coach Mike Burns. “He had one of those meets that you dream a lot about as both a coach and gymnast.”

The Gopher Club team rounded out the scoring in the tri-meet with a 218.150 overall.

Karstadt stuck his third dismount of the meet in the high bar. He finished with a 13.050 in the event.

The junior said he liked his resiliency in the meet.

“I ran into some trouble around [parallel] bars,” Karstadt said. “I started cramping up. I actually had to get my coach to massage me.”

Junior Jalon Stephens earned first place in the event with a 13.850.

Karstadt finished in first place on the rings with a 14.400. Junior Yaroslav Pochinka came close to a stuck dismount on rings, but couldn’t keep his balance. He still earned a 14.150 in the event for second place.

Pochinka was the final gymnast for the Gophers in the vault. He earned 14.750, the best for any gymnast on the day.

Minnesota had four gymnasts earn above 14.000 in the vault. The Gophers beat the Huskers with a score 72.100, their best mark of the season.

Sophomore Michael Harris recovered from going out of bounds in the vault, and stuck a dismount in the final event of the dual, the high bar. Harris earned a 12.150 in the high bar.

Karstadt came off the pommel horse and stuck his routine with a dismount.

The performance earned him a 13.900 and second place, the best total of all Gophers in the event.

Junior Alex Wittenberg earned a 13.350 to finish second among Gophers in the pommel horse.

Minnesota’s next meet is a tri-meet in Iowa City, Iowa, where the No. 5 Gophers take on No. 1 Oklahoma and No. 11 Iowa.

“Any place you go, the judges are just a little bit different,” Burns said. “So really what we want to see is an improved hit percentage.”

On the other side, a Minnesota gymnastics team lost in Illinois for the second consecutive week.

“It wasn’t the meet we were hoping for,” head coach Jenny Hansen told the media. “We wanted to build off our incredible meet last weekend, but unfortunately we weren’t able to replicate our success on the road.”

Junior Ciara Gardner finished first among Minnesota gymnasts in the all-around, which was third overall in the dual.

Freshman Ivy Lu tied for first place on uneven bars with a 9.850 in the event, a personal best.

Lu wasn’t the only freshman to shine for the Gophers.

Freshman Paige Williams tied for first in the vault with a 9.825.

“The highlights of the meet were our two wins from freshmen Ivy Lu and Paige Williams,” Hansen said. “They both had great performances and we are really proud of them.”