Gophers win as Kill looks on 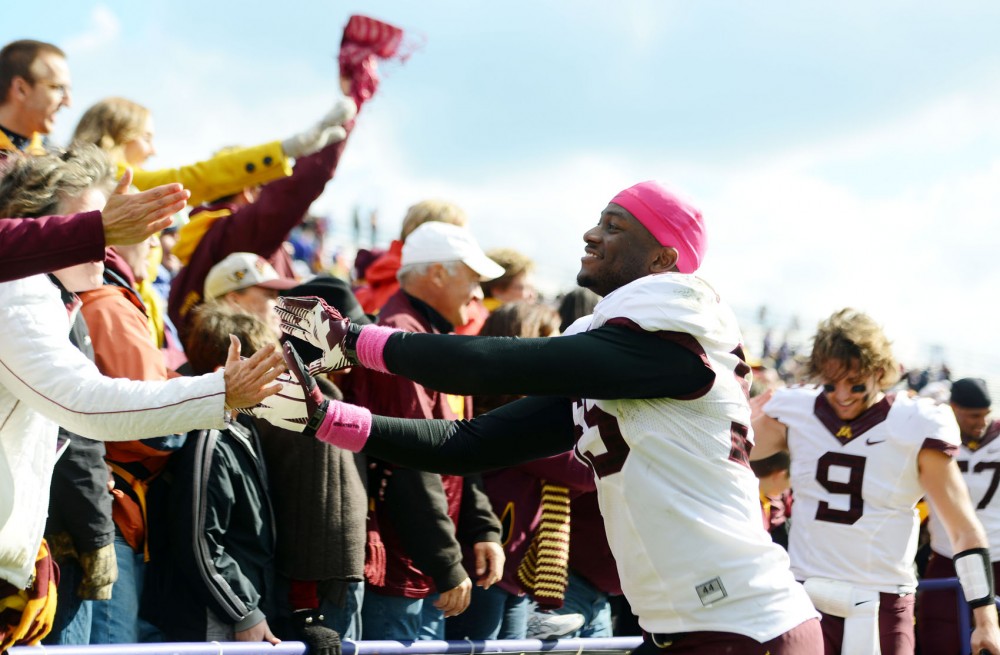 Gophers fans high-five defensive lineman Theiren Cockran after the Gophers beat Northwestern 20-17 at Ryan Field in Evanston, Ill., on Saturday. Minnesota is one win away from being bowl eligible.

EVANSTON, Ill. — Sophomore quarterback Philip Nelson walked into the Gophers’ locker room at halftime Saturday, his team tied 7-7 against Northwestern University. And standing in the middle of the room was Gophers head coach Jerry Kill, the man almost no one expected to be there.

Nelson said he was surprised to see the University of Minnesota third-year head coach, but he credited Kill’s halftime speech with having inspired the team to a 20-17 win over Northwestern at Ryan Field in Evanston, Ill.

“He just said that we need to be able to fight through everything and he loves us and is so proud of us,” Nelson said. “That’s the little edge that we needed.”

Minnesota played a strong second half with Kill watching from the coaches’ box.

The Gophers moved one win closer to bowl eligibility with the win and uncovered some much-needed momentum, thanks in part to a strong defensive effort, an unlikely offensive hero and their unexpected visitor.

“For coach to make that drive to be here and watch the game is pretty special,” acting head coach and defensive coordinator Tracy Claeys said.

Kill was seen going from the press box to the coaches’ box near the end of halftime. A University spokesperson said he heard before the game that Kill and his wife, Rebecca Kill, drove to Evanston because Kill decided he couldn’t watch the game from home.

Kill has been on an open-ended leave of absence since Oct. 10 to focus on his epilepsy treatment. He was not coaching Saturday, and the spokesperson was clear that Kill’s status hasn’t changed.

Claeys said last Tuesday he didn’t expect Kill to make the trip, but he said after the game it didn’t surprise him that the head coach did.

Kill had stopped by the Gibson-Nagurski Football Complex on Friday as the team was boarding the buses.

Claeys said Sunday he wouldn’t be surprised to see Kill at practice this week, but he added that his return to coaching will come slowly.

“He’s making the progress towards it,” Claeys said, “but he’s not there yet.”

The Gophers struggled early Saturday, especially on offense. Minnesota punted on its first four possessions, and penalties and an inability to run the ball hampered the team.

It appeared the Wildcats were on the verge of breaking the game open after scoring a touchdown late in the first quarter, but Nelson came in early in the second and sparked the Gophers’ offense.

He led the team on an eight-play, 82-yard drive and capped it with a 29-yard touchdown pass to redshirt senior wide receiver Derrick Engel.

The game was tied 7-7 at halftime, but momentum had shifted in Minnesota’s favor. The Gophers were winning the physical battles on the line of scrimmage and had shut down Northwestern’s offense for most of the second quarter.

Then Kill addressed the team in the locker room.

Minnesota’s defense dominated the third quarter, holding the Wildcats scoreless and forcing two turnovers — one that gave the Gophers a 14-7 lead.

Senior linebacker James Manuel intercepted a pass by Northwestern quarterback Trevor Siemian late in the third quarter and returned it 24 yards for a touchdown.

“They threw a slant underneath, and I just happened to be right there and make a play,” Manuel said.

Northwestern scored a touchdown late in the fourth quarter, but Minnesota ran out the clock on its last possession, clinching its first Big Ten win since last November.

Nelson said that Kill looked like his usual self at the post-game speech in the locker room.

Claeys said it was a relief to have his boss and longtime friend at the game.

“He’s kind of like Linus’ blanket,” Claeys said. “To have him around just makes everyone feel comfortable because he means a hell of a lot to all of us.”