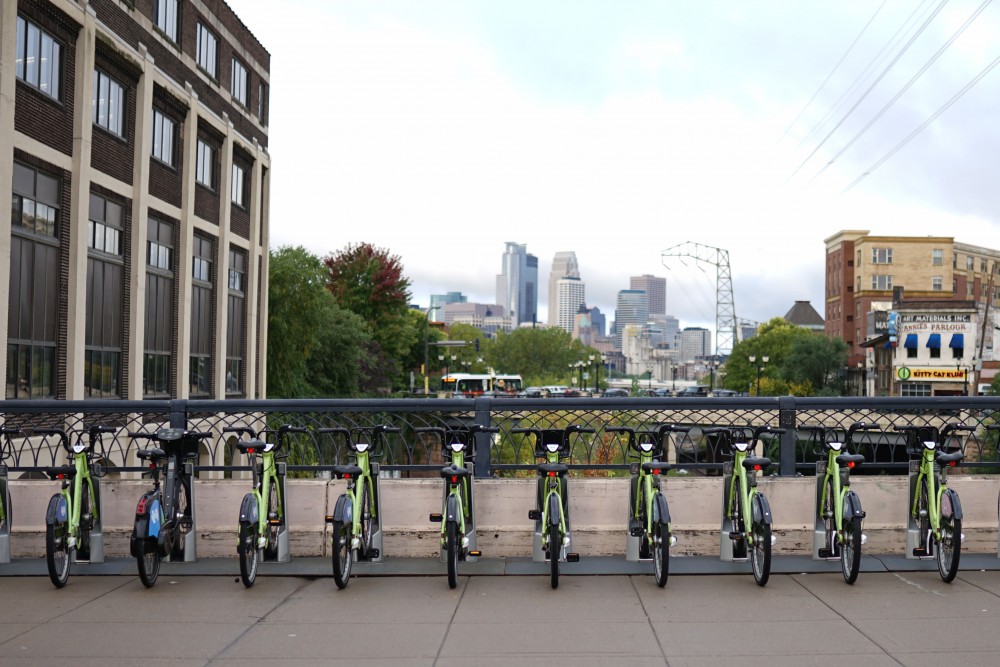 Nice Ride bikes are seen on the corner of Fourth Street Southeast and 15th Avenue Southeast on Thursday, Oct. 3.

After debuting just over a year ago, Nice Ride’s dockless blue bikes could be phased out.

Nice Ride Minnesota held a forum on Sept. 24 in Stadium Village to discuss potentially retiring the blue bikes and adding electric bikes to its Minneapolis fleet. The blue bikes lack needed technology and cause confusion for some users, Nice Ride representatives said. Next year, Nice Ride may also require users to dock their bikes or lock them to a bike rack after finishing a ride.

The blue bikes lack a reliable cellular connection, making it difficult to locate bikes and enforce parking requirements. Nice Ride expected users to return blue dockless bikes to one of 333 hubs scattered throughout Minneapolis. Instead, bikes were sometimes found parked on sidewalks and other right-of-ways, said Claire Repp, a marketing lead at Nice Ride.

The debut of electric scooters has caused some confusion among Nice Ride users about where bikes should be returned, Repp said.

“If you see a scooter on the sidewalk, but you have to turn your bike back in somewhere it doesn’t necessarily add up,” Repp said at the forum, “especially if you’re a visitor or someone who doesn’t use the system regularly.”

Mirroring a nationwide uptick in bike theft, Nice Ride saw the number of missing bikes more than double in 2019 compared to the program’s previous eight years combined. Nice Ride will try to recover bikes classified as “lost, stolen or vandalized beyond repair” after its season ends later this year.

Bill Dossett, executive director of the nonprofit Nice Ride, said he anticipates the addition of about 2,000 electric bikes in April. The Minneapolis fleet currently includes 49 e-bikes.

The new e-bikes could include docking capabilities and a cable near the back wheel that allows riders to lock the bike to a rack or other structure. Despite these changes, Nice Ride will aim to maintain the accessibility of the dockless model, Dossett said.

“We will have dockless, but it will be a lock-to dockless,” he said. “What that means is you can’t end your rental anywhere you want to. Instead you have to end your rental either in a station or by locking it to a public rack.”

Dossett said Nice Ride will consider the model currently implemented at the University of Minnesota, which made all public bike racks hubs for blue dockless bikes, when evaluating next year’s lock-to system.

A lack of public bike racks throughout Minneapolis may make the new program difficult to implement, he said.

“The challenge is that there aren’t as many bike parking racks in downtown, for example, as there are at the University, so we’re going to have to figure out ways to add racks,” Dossett said.

Despite the potential for changing bike models, the number of public bikes available to University students is slated to remain the same, said Jacqueline Bass, a communications manager with the University’s Parking and Transportation Services.

“There aren’t going to be any changes with the number of bike sharing opportunities at the University,” she said. “The number’s not going to change, they just might change the style.”

Before the changes can be finalized, they must receive approval from various stakeholders, including Lyft, which bought Nice Ride operator Motivate in 2018.