At 79, House of Hanson depends on buyer loyalty

The Dinkytown business is one of many that has been around for decades. 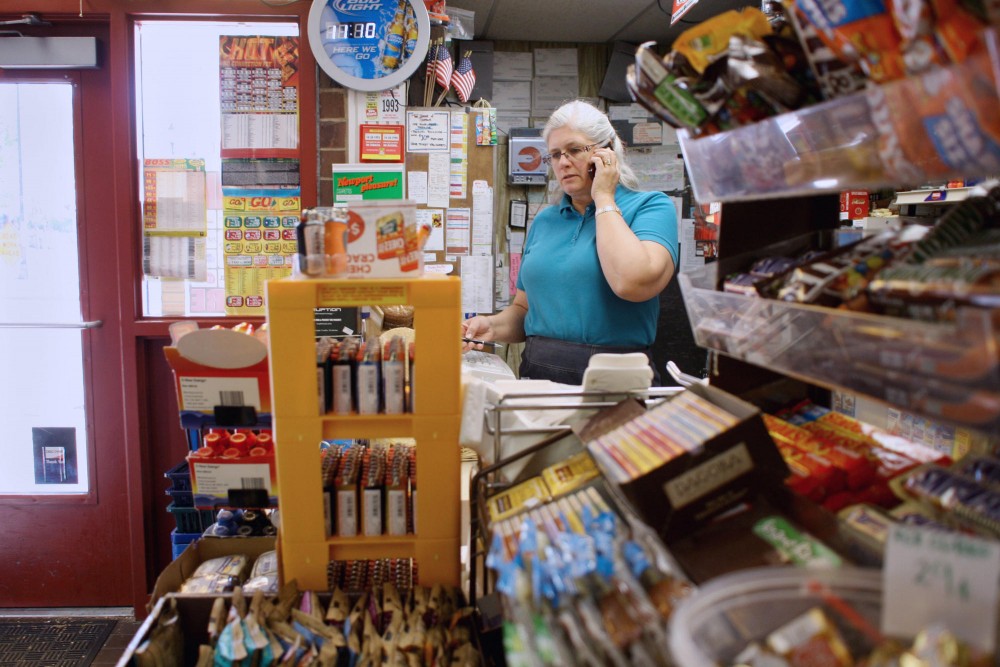 House of Hanson owner Laurel Bauer answers a phone call Monday at the store in Dinkytown Minneapolis. House of Hanson was opened by Laurel's grandfather and has been in her family for 79 years. The store is currently going through $100,000 dollars of renovation and improvement.

In the constant rotation of opening and closing Dinkytown businesses, one store has weathered the competition for decades.

House of Hanson, the oldest business in the neighborhood, turned 79 last week. ItâÄôs the only store near the University of MinnesotaâÄôs East Bank campus serving students and residents looking to get groceries on the fly.

âÄúItâÄôs a great location âÄî itâÄôs really close to my house,âÄù said Chelsea Gibbs, a University student living in the Marcy-Holmes neighborhood. âÄúItâÄôs good if youâÄôre looking for little things on your walk from campus.âÄù

The store is a family-owned business. Laurel Bauer, the current owner, inherited it from her father. Her grandfather, Henry Oscar Hanson, started the business in 1932 as a cafÃ©. The business broke into selling groceries in the 1960s.

Back then Dinkytown had plenty of grocery stores, Bauer said. But growing rent prices and stiff competition made it hard for businesses to stick around.

She said House of Hanson survives because of its attentiveness to the clientele. She said she often talks with students and takes requests for new merchandise.

Uncommon items like Kombucha âÄî a tea-based beverage âÄî grace the shelves of the House of Hanson upon requests from students and other shoppers, Bauer said.

âÄú[The store has] got a bit of everything,âÄù said Jordan Jeromchek, who works a few doors down at Pacific & Main. âÄúItâÄôs like a mini Wal-mart.âÄù

But the store is not without competition.

CVS pharmacy, which moved into a space at Fourth Street and 15th Avenue Southeast last year, had a big impact on revenue at first, Bauer said. The drug store carries a limited amount of groceries, but at lower prices.

Bauer said despite struggling to compete with a business that can offer steep discounts, most of her customers have stuck around.

The storeâÄôs unique personality and family approach have a strong draw, said Skott Johnson, the president of the Dinkytown Business Association.

âÄúTheyâÄôve just become such a part of the fabric here that theyâÄôve had a lot of loyalty,âÄù Johnson said.

Years of service have meant updates to day-to-day operations. Bauer said sheâÄôs had to re-haul her inventory system. She is also working to update the Dinkytown parking lot located behind the store, which she owns.

But the store still relies on an old-fashioned cash register, and Bauer said she doesnâÄôt feel the need to upgrade to scanning items just yet. Being able to calculate change in her head is a much more valuable skill, she said.

âÄúI still think IâÄôve got the upper hand,âÄù she said. âÄúI can still run my business in the dark.âÄù

Despite being the oldest, House of Hanson is not the only business that has stuck around through multiple student generations.

AlâÄôs Breakfast, a well-known establishment thatâÄôs been featured on national television, is famous for the 14 stools that fill whatâÄôs thought to be the narrowest restaurant in Minneapolis. It first opened in 1950, said Doug Grina, one of the current owners of the restaurant. The first owner bought the space for about $500, Grina said.

Many businesses donâÄôt get to stick around for long, he said. Rent in the area is high, and many restaurants donâÄôt catch on with local residents.

VescioâÄôs Italian Restaurant, at 406 14th Ave., is 55 years old and has expanded into downtown Minneapolis and St. Louis Park.

Some businesses in the past have even beaten House of HansonâÄôs 79-years-long stint. Simms Hardware, which lasted 115 years, closed in 2002.

Small businesses can build personal relationships with customers, allowing them to outlast many bigger franchises, said Johnson, whoâÄôs also owner of the Autographics printing store, which has been open for more than 20 years.