Minnesota ranked “best” for some, but not women of color

Gov. Dayton and the Women’s Foundation of Minnesota announced a six-year initiative to alleviate achievement gap for women of color. 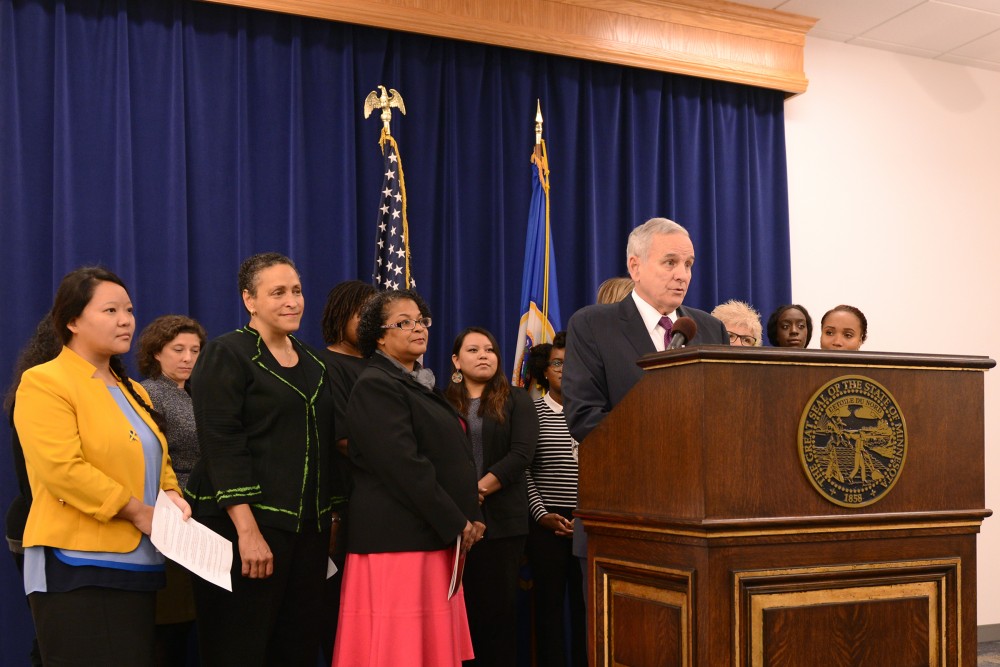 Gov. Mark Dayton discloses a new initiative for young women of Minnesota on Tuesday, Oct. 22, 2016 at the Veterans Service Building in St. Paul. Governor Dayton announced an outreach initiative that incorporates the Women's Foundation of MN and the University's Urban Research and Outreach-Engagement Center to bring opportunity to young women.

The plan, the Young Women’s Initiative of Minnesota, is focused on improving equality for young women of color, American Indian woman, LGBTQ women and women with disabilities between the ages of 12 and 24. The six-year, $8 million project was funded by the Women’s Foundation of Minnesota.

Though Minnesota is rated the best state for women, officials say the experiences of young women of color and those with disabilities are much different.

“The truth is, all across the state many young women and girls do face barriers to education and jobs and that is holding the entire state back,” said Lt. Governor Tina Smith.

Research and implementation falls to the University of Minnesota’s Urban Research and Outreach-Engagement Center. The program has provided the center with a $220,000 grant.

Dayton said the initiative is the first of its kind in the nation.

He said it is not slated to receive state funding but that money for the initiative will be included in the next budget request.

The program is made up of community working groups, a young women’s cabinet through the St. Paul YWCA and an initiative council, said Makeda Zulu-Gillespie, director of community outreach at the University of Minnesota’s Urban Research and Outreach-Engagement Center.

The program will release its “action plan” in April 2017.

“The reality is that just like everyone, young women and girls want a life that affords that freedom and opportunity,” Smith said.