The Nittany Lions have beat the Gophers in the last three matchups this season. 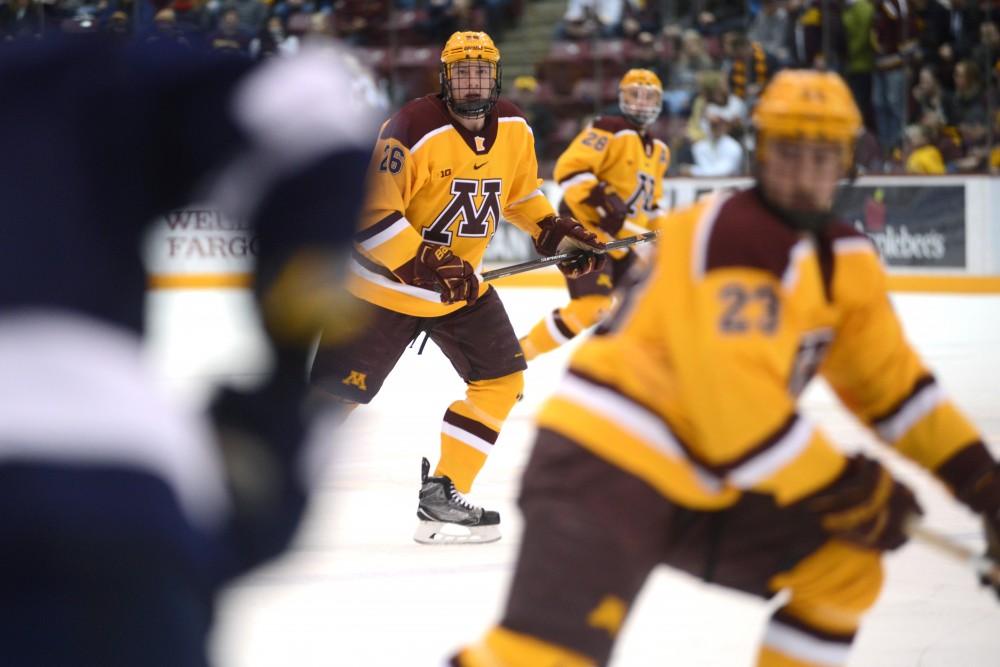 Forward Darian Romanko, center, eyes the puck during a game against Penn State at 3M at Mariucci Arena Feb. 4, 2017.

The Nittany Lions scored five goals in each of the two games against the Gophers last weekend.

The first game of this weekend, Penn State picked up right where it left off.

“They keep coming at you and force you to make some turnovers and that’s part of the way they play,” head coach Don Lucia told the Gopher Radio Network. “We have to make some better first touches … I thought the guys dug into a lot of good things tonight.”

The game was close until 1:11 left in the second period. The score was tied 2-2 after a tying goal from Minnesota forward Scott Reedy with under five minutes left in the frame. Before the second could end, though, Minnesota stumbled and conceded two goals in the last 1:11 for Penn State to get a lead and extend the score to 4-2

It looked like Minnesota would have new life after the Reedy goal, but that excitement quickly simmered thanks to the two even-strength goals for the Nittany Lions.

“You have to sustain [pressure],” Lucia told the Gopher Radio Network. “You get to this time of year, and you just can’t have those lapses.”

Penn State forward James Robinson made contact with Minnesota captain Tyler Sheehy’s head in a hit and was ejected from the game halfway through the third period. Despite the five minute penalty that Robinson incurred, Sheehy was also called for embellishment on the play, shortening Minnesota’s power play to just three minutes after a session of four-on-four play.

On the opposite side, forward Darian Romanko was also ejected from the game. He left late in the first period after a hit from behind in the offensive zone on Penn State defenseman Erik Autio. The Nittany Lions had a five-minute power play, where they scored their second goal, while the Gophers had to kill the rest of the game’s penalties without one of their best penalty killers.

“We did some good things from an offensive standpoint,” Lucia told the Gopher Radio Network. “We got to three, but the bottom is that this is three straight games we’ve given up five. You’ve got no chance to win when you do that.”

The Gophers allowed two power play goals in the game, but also got two of their own, both from forward Casey Mittelstadt. The two goals for Mittelstadt marks his first collegiate multi-goal game.

Minnesota needs to win Saturday to extend the best-of-three series into Sunday. If the Gophers win both Saturday and Sunday, they will play in the Big Ten semifinal game on March 10.

Lucia said there was one thing that stood out to him though for the loss — discipline.

“I was really disappointed in some of the penalties we took,” Lucia told the Gopher Radio Network. “You can’t do that, [Romanko], we lose him, he’s an important penalty killer. It changes your whole dynamics. “