Community members and students brought in old electronics to be recycled or reused. 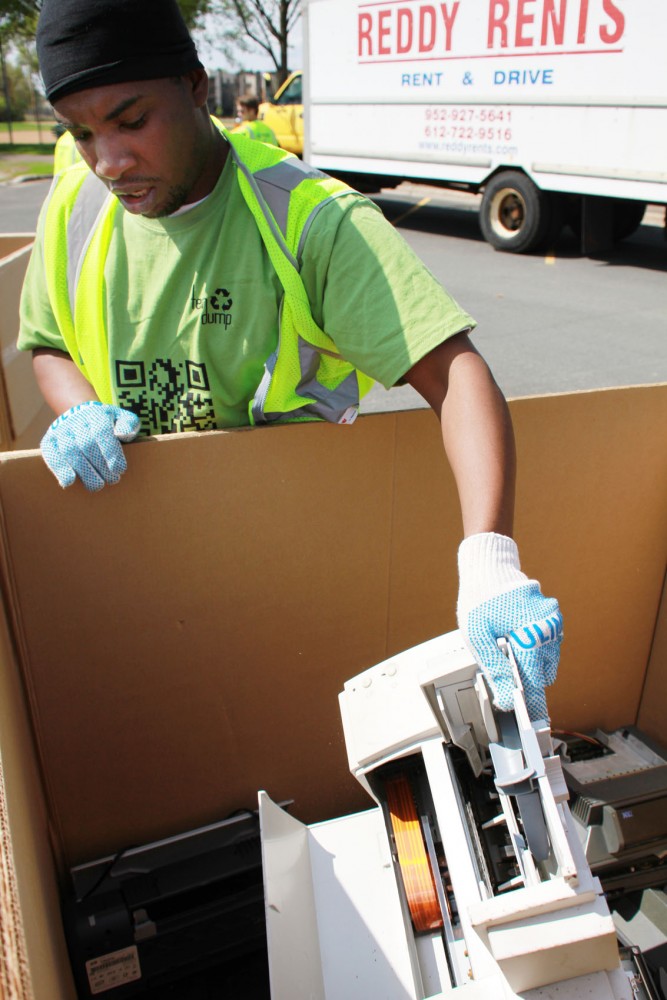 Dan Patterson, an employee of Tech Dump, throws an old computer tower in a bin to be recycled Monday at Van Cleave Park. Tech Dump, a division of Jobs Foundation, co-sponsored the event to collect old or outdated electronics to be recycled, refurbished or destroyed.

Students and residents in the Southeast Como neighborhood trickled into Van Cleve Park to dump their electronic junk Monday afternoon.

The Jobs Foundation is a Minnesota-based nonprofit organization working to provide employment opportunities for underprivileged adults by selling donated goods.

The Jobs Foundation has been hosting tech dumps around the state for about a year, said Dupree Logan, Jobs Foundation program manager. But this is the first time the foundation partnered with the University, said Ryan Pusch a student neighborhood liaison.

“It seemed like a good fit for us and a good opportunity for them to be involved in something that fit their profile,” Logan said.

The Tech Dump attracted about 30 people, Pusch said, about half of which were students and the other half neighborhood residents. One student neighborhood liaison went to an elderly resident’s house to help her carry a TV to her car to bring to the event.

The recycling of old electronics is important because it lightens the load on landfills, Pusch said.

At the end of the event, four to five roughly 4 feet by 4 feet boxes were filled with dozens of computers, TVs, printers, cellphones and cords. People were allowed to bring monitors and other electronics but no household appliances. Florescent lights, which are considered hazardous waste, were also not allowed, said George Lee, founder of the Jobs Foundation.

Because of the price of recycling certain parts in older TV sets, there was also a $10 suggested donation.

All hard drives that are reusable get wiped clean following U.S. Department of Defense standards, Lee said, and those that are not reusable are destroyed.

After the event, all the donated items were loaded into a truck and brought to the Jobs Foundation building in Plymouth, Minn. Once there, Jobs Foundation employees will sort the items to either be recycled or resold.